Top Posts
Knowing the One Who Always Keeps His Word
Pregnancy Resource Centers Fight For Life Amidst Opposition
This World is Not Our Home
Lessons Learned From a Gingerbread House
Let There Be Peace on Earth
‘I Wanna Dance’ movie: Whitney Houston’s success and...
Fact Finding, Sight Seeing, and Prayer Walking
Kidney donation led to 8 life-saving surgeries
The Power of Curiosity
When Love Came Down at Christmas
Home Tags Posts tagged with "Billy Graham Rapid Response Team (BG-RRT)"

CHARLOTTE, N.C. (ANS) — Nearly 20 inches of rain fell this week and flood waters damaged more than 200 homes in the Deep South with many areas still inaccessible until the waters recede.

The Billy Graham Rapid Response Team (BG-RRT) has deployed crisis-trained chaplains to Dumas, Arkansas, and Mound Bayou, Mississippi, as the areas received massive amounts of rain resulting in severe flooding. Teams of chaplains will provide emotional and spiritual care alongside Samaritan’s Purse in each of the two regions. 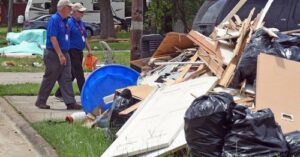 “Our hearts, our thoughts and our prayers go out to the individuals in this area who have been impacted by varying degrees with the staggering amount of rainfall that has damaged or destroyed many homes,” said Josh Holland, assistant director of the Billy Graham Rapid Response Team. “God’s Word says that He is with us in the floods, physically and spiritually, and we pray that people in these areas will know that God loves them even in this painful time. We have crisis-trained chaplains who will be available to share God’s love and the hope found through Jesus Christ in life’s most difficult times.”

BG-RRT chaplains have responded to 23 disaster sites in 2021—including six deployments as a result of flooding—and are currently serving in Plaquemine and Lake Charles, Louisiana, after flooding events in May.

For more information on the ministry, including videos, photos, news articles and an interactive map of former and current deployments, visit the BG-RRT press kit or BillyGraham.org/RRT. Updates can also be found at Facebook.com/RRTChaplains.