Top Posts
Knowing the One Who Always Keeps His Word
Pregnancy Resource Centers Fight For Life Amidst Opposition
This World is Not Our Home
Lessons Learned From a Gingerbread House
Let There Be Peace on Earth
‘I Wanna Dance’ movie: Whitney Houston’s success and...
Fact Finding, Sight Seeing, and Prayer Walking
Kidney donation led to 8 life-saving surgeries
The Power of Curiosity
When Love Came Down at Christmas
Home Tags Posts tagged with "Billy Graham Rapid Response Team Chaplains"

“Our hearts are heavy to hear of the tragic, fatal shooting of a local law enforcement officer in Mount Holly,” said Josh Holland, assistant director of the BG-RRT. 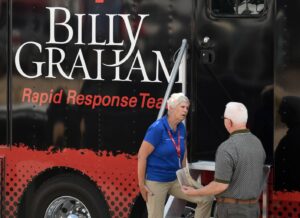 “We pray for God’s supernatural comfort and peace for the officer’s family and friends. The Billy Graham Rapid Response Team has accepted an invitation to provide crisis-trained chaplains to offer support and care to the community and the department in this time of great loss.”

The shooting happened around 3:30 a.m. Friday morning at a car wash in Gaston County after officers responded to a breaking and entering call.

Friday’s deployment is the fourth active deployment and the 46th overall for the BG-RRT in 2020. Chaplains are still serving in Lake Charles and DeQuincy, Louisiana, as well as Foley, Alabama, where they have been deployed since the fall as the Gulf of Mexico was devastated by multiple hurricanes during one of the worst hurricane seasons in history.

The Billy Graham Rapid Response Team was developed by Franklin Graham and the Billy Graham Evangelistic Association following the attacks of Sept. 11, 2001. It has since grown into an international network of chaplains in the U.S., U.K., Canada and Australia who are specifically trained to deal with crisis situations. They have deployed to more than 450 disaster sites across the globe, including shootings, floods, hurricanes, wildfires and tornadoes.