Top Posts
Knowing the One Who Always Keeps His Word
Pregnancy Resource Centers Fight For Life Amidst Opposition
This World is Not Our Home
Lessons Learned From a Gingerbread House
Let There Be Peace on Earth
‘I Wanna Dance’ movie: Whitney Houston’s success and...
Fact Finding, Sight Seeing, and Prayer Walking
Kidney donation led to 8 life-saving surgeries
The Power of Curiosity
When Love Came Down at Christmas
Home Tags Posts tagged with "Black History" 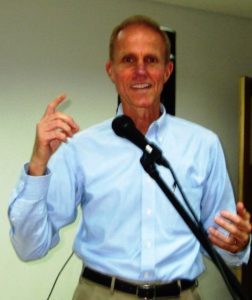 A tense speaking engagement in university taught invaluable lessons that helped open global presentation doors, like this one in Paraguay.

MOUNT HERMON, CA (ANS – August 22, 2018) – Being an introvert can complicate life. As a teen, sometimes I was afraid to introduce myself to a stranger or to ask a young woman for a date. At Duke, the frosh-faces picture book struck fear in my heart whenever I phoned a women’s dorm. I was sure that picture book hung by every hall telephone and that while I was on hold, a woman was quickly looking me up in it.

Shyness and fear, of course, can also hamper public speaking. Since my career has involved lecturing worldwide, people sometimes are surprised or skeptical to hear of my introversion.  Experiences at Duke helped me learn to deal with those fears. Presenting in a tense situation during my final Duke class in January1971 taught me invaluable lessons.

Duke’s 1968 Silent Vigil and 1969 Allen Building takeover spawned a black studies program that informed my already firm dedication to racial equality. My history professor, the late Raymond Gavins, was in his first year in 1970-71 and later became an icon in his field. I appreciated his intriguing course (about pre-Civil War African-American U.S. history), but we clearly disagreed on one fundamental point.

An African-American scholar, he felt white Christians had caused many or most problems blacks faced in this country.  A white student, I acknowledged atrocious behavior, from white ministers supporting slavery to the Klan burning crosses. But, I maintained, these people weren’t really following Jesus; many white believers championed racial equality, and their views resonated with me. Our frequent class discussions were cordial but had sizzle and conviction.

Gavins’ argument was especially pointed one morning late in the semester, as he mentioned two historical race-related problems. Each time as he attributed their cause to “white Christians,” he gestured toward me.

I respectfully suggested again that he was criticizing not genuine Christian practice but a caricature. This time I asked whether he would let me take a session to present a biblical perspective on racism.

“Oh, so you want equal time, do you?” he inquired.

In response, I read from my notes his statement from the first class day:  “We want to be open-minded in this course and consider all viewpoints.”  He agreed to give me the final session.

The big day—my last Duke class meeting; it was my final semester—brought many fears.  My knees weren’t knocking, they were missing. Would I present convincingly? Could I answer questions effectively? I lost my breakfast three times before leaving my residence.

The classroom was nearly full and included visitors who had heard of the controversy. I felt excited but a bit nervous as I stepped up to place my notes on the lectern. As I surveyed the audience, some faces were warm, others skeptical. The situation seemed tense, with observers eager to see what would transpire. In presenting, I used contemporary and historical examples.  The audience asked perceptive questions.

Near the end, Gavins said he felt like the biblical King Agrippa who, upon hearing the apostle Paul’s speech, said, “You’ve almost persuaded me to become a Christian.”

“And now,” Gavins said to me and the class, “As Agrippa did with Paul, let us proceed with your execution: What would you do if you got to heaven and discovered that Jesus Christ was black?”  I was on the spot!

My response wasn’t original with me, but I don’t remember preparing it:  “Jesus was of Semitic descent; his skin was probably closer in pigmentation to yours than to mine. But the important thing is not whether his skin was black or white, but that his blood was red and he shed it so I could be forgiven.” I don’t know if that answer satisfied him. He didn’t respond; instead he turned to the class and began to talk about our final exam.

Gavins and I spoke a few times in subsequent years, always pleasantly. We each felt we had moderated our opinions since 1971.

I’ve been grateful to travel the globe communicating in classrooms, ballrooms, boardrooms, chapter rooms, locker rooms, embassies, and military bases and via TV and radio on significant themes. I still get jitters, and not every at-bat is a home run. But as I face audiences, I often recall the formative lessons about fear I learned that morning. I remain grateful to Professor Gavins and my classmates for helping me learn them.

Wright ’71 is a writer and lecturer who has spoken on six continents.  www.RustyWright.com

Editors:  For access to the image above, check here.  Please include the Duke credit line below when republishing this article, and include the link below to the magazine if publishing online:

This article first appeared in Duke Magazine, Special Issue 2018, and is used by permission.