Top Posts
Knowing the One Who Always Keeps His Word
Pregnancy Resource Centers Fight For Life Amidst Opposition
This World is Not Our Home
Lessons Learned From a Gingerbread House
Let There Be Peace on Earth
‘I Wanna Dance’ movie: Whitney Houston’s success and...
Fact Finding, Sight Seeing, and Prayer Walking
Kidney donation led to 8 life-saving surgeries
The Power of Curiosity
When Love Came Down at Christmas
Home Tags Posts tagged with "Bnei Menashe"

ISRAEL (ANS) — A group of 114 immigrants, who were stuck in transit for the past month in New Delhi due to some having coronavirus, finally landed in Israel on Sunday.

The group was part of an emergency airlift arranged by the Jewish Agency and Shavei Israel, with the International Christian Embassy Jerusalem (ICEJ) serving as a main sponsor of this urgent Aliyah operation, according to Anastasiya Gooding, ICEJ Staff Writer. 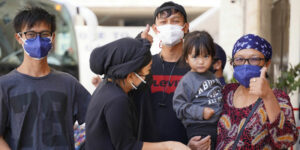 The group were made up of Bnei Menashe, which are an ethnolinguistic group in India’s North-Eastern border states of Manipur and Mizoram. Aliyah is immigration of Jews from the diaspora to the Land of Israel.

In total, the ICEJ sponsored flights for 131 out of the 274 Bnei Menashe who were brought to Israel over the past month. ICEJ also covered the delayed group’s housing and meals for about one-third of their four-week stay in New Delhi.

ICEJ said the arrival of new olim (immigrants) to Israel is always a very touching and emotional event.

Batya Misao, along with her four children, were among the 114 immigrants who arrived in Israel on Sunday night. ICEJ reported the Aliyah story of this Israelite family is nothing short of a heart-rending journey.

In its report, ICEJ said Batya has been dreaming about making Aliyah to Israel for as long as she can remember. Once she married her husband Samuel and they started a family, the dream grew to include their children – twelve-year-old Ellan, nine-year-old Leah, five-year-old Zohar, and three-year-old Nuriah.

“It is difficult to imagine what a blow this family experienced as they were full of bright hopes when tragedy struck last year,” ICEJ stated.

Samuel died in a devastating car accident. After that, it seemed that all of Batya’s plans, her hopes and dreams, had collapsed overnight.

However, Batya managed to put the pieces of their life back together.

“As a single mother now, she always kept a positive attitude, still waiting for the day when she could bring her family to Israel to fulfill their dream, carrying the memory of her husband Samuel home with her to Zion. She knew that even in the midst of darkness, there is always room for a ray of hope,” ICEJ said.

Due to a major surge in coronavirus deaths and infections in India, the Israeli government decided earlier this year to speed up the Aliyah process for 548 members of the Bnei Menashe community in northeast India already approved to immigrate to Israel. 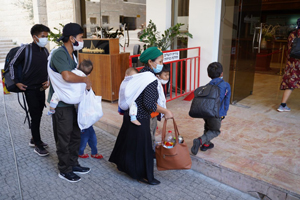 A Bnei Menashe family arrive at their hotel

Descendants of the lost Israelite tribe of Manasseh, half the group were about to make their dream come true, including Batya and her children. A specially chartered flight was arranged by the Jewish Agency and Shavei Israel, and sponsored in part by the Christian Embassy, to bring the first 274 of the pre-approved group in an emergency airlift in May.

ICEJ said: “But right before they were about to depart on the final leg from New Dehli, about three dozen people in the group tested positive for COVID-19 and they had to stay behind, along with their families.”

This meant the Misao family had to wait not knowing when they could finally reach Israel.

“It ended up another 27 long days and nights of waiting before everyone recovered and the entire group could fly on to their desired destination. Thankfully, the ICEJ stepped in to assist with their urgent need for help with housing, food, and care for these families until they could finally leave for Israel.

“What a joy for the Misao family to finally be back in the land of their ancestors after 27 centuries in exile and an extra four weeks in New Delhi.”

The Bnei Menashe, or “sons of Manasseh,” claim descent from one of the lost tribes of Israel. Their ancestors were exiled from the Land of Israel by the Assyrian Empire some 27 centuries ago and wandered throughout the East until they reached what is now northeast India, between Myanmar and Bangladesh.

“Despite their wanderings and isolation, they kept their ancient traditions alive, such as honoring Shabbat and refusing to eat pork. Most of all, they kept alive their dream of one day returning to the Land of their forefathers,” ICEJ said.

The next airlift of the second group of 274 Bnei Menashe is expected in early September. ICEJ seeks donations from interested individuals wanting to assist families to return to the Holy Land.