JERUSALEM, Israel (ANS) — A British maritime archaeologist claims that he has discovered proof of the elusive biblical King Solomon and his purported maritime empire that was formed through a political alliance with the ancient Phoenicians who ruled in present-day Lebanon.

Though much is written in the Bible about King Solomon, and he is described as a powerful monarch with great wealth and wisdom who built the First Temple of Jerusalem, no direct archaeological evidence of his reign has been uncovered. Consequently, many historians and archaeologists have concluded that Solomon was either a leader of a minor chiefdom or even an idealized myth. 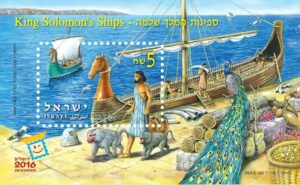 However, according to ALL ISRAEL NEWS, Dr. Sean Kingsley is challenging this narrative with his new findings, arguing that the biblical account of Solomon is largely accurate. While archaeologists traditionally search for evidence of Solomon in Israel, Kingsley adopted an alternative investigation, focusing on finding evidence of the Mediterranean empire that Solomon, according to the Bible, built through his alliance with the Phoenician king, Hiram.

“I’ve spread a very wide net. That kind of maritime study has never been done before,” Kingsley told the Guardian.

On the surface, Kingsley appears as an unlikely candidate for discovering the biblical Solomon. Instead of digging in the soil of the Holy Land, Kingsley has spent the past three decades exploring over 350 shipwrecks.

Kingsley explained the rationale behind his alternative investigation.

“For 100 years, archaeologists have scrutinized Jerusalem’s holy soils, the most excavated city in the world. Nothing definitive fits the book of Kings’ and Chronicles’ epic accounts of Solomon’s palace and temple. By exploring traces of ports, warehouses, industry and shipwrecks, new evidence shakes up the quest for truth,” said Kingsley.

Kingsley’s quest for finding evidence of King Solomon’s existence brought him to Spain, far away from the Holy Land. Kingsley argues that he discovered “a Phoenician coast” in the Western Mediterranean, consisting of several sites connected to trade and mining, including Rio Tinto in Spain.

In Rio Tinto, old maps reveal the existence of a site described as “Solomon Hill” or “Solomon Castle.” According to one 16th-century account, gold and silver were mined at this site on Solomon’s behalf. Kingsley further argues that an isotope analysis revealed that silver hoards discovered in the Holy Land were of Spanish origin. In addition, pottery discovered nearby in the Spanish city of Huelva, reportedly shows a connection to the Land of Israel and Phoenicia. According to Kingsley, Huelva is likely the biblical capital of Tarshish, a place of precious metals for King Solomon.

“What turned up in southern Spain is undeniable. Phoenician signature finds, richly strewn from Rio Tinto to Málaga, leave no doubt that Near Eastern ships voyaged to what must have seemed the far side of the moon by 900 BC,” Kingsley said.

Recent discoveries of shekel weights, Near Eastern pottery and elephant tusks in Huelva, further links the site to the ancient Israelites and Phoenicians.

Kingsley enthusiastically described how his discovery brought history and legend together, further confirming the biblical accounts.

“When I spotted in ancient accounts the name of the hill where silver was mined at Rio Tinto — Solomon’s Hill — I was stunned,” he said. “Biblical history, archaeology, and myth merged to reveal the long-sought land of Tarshish celebrated in the Old Testament.”

Kingsley explained the rationale behind Solomon’s maritime empire: “Neither Israel nor Lebanon could tap into local gold and silver resources. The biblical entrepreneurs were forced to look to the horizon. The land of Tarshish was a vital source of Solomon’s silver. As the Book of Ezekiel recorded: ‘Tarshish did business with you because of your great wealth of goods.’”

Kingsley concluded by describing the biblical Solomon as a successful shipping magnate who outsourced the actual dangerous maritime voyages to the Phoenician sailors.

“It looks like Solomon was wise in his maritime planning. He bankrolled the voyages from Jerusalem and let salty Phoenician sailors take all the risks at sea,” he said.

Kingsley’s new findings will be published in the spring issue of the Wreckwatch magazine, a journal dedicated to maritime archaeology.