Top Posts
Colorado football coach Sanders’ unabashed faith
There’s A Light That Enters Houses With No...
Knowing the One Who Always Keeps His Word
Pregnancy Resource Centers Fight For Life Amidst Opposition
This World is Not Our Home
Lessons Learned From a Gingerbread House
Let There Be Peace on Earth
‘I Wanna Dance’ movie: Whitney Houston’s success and...
Fact Finding, Sight Seeing, and Prayer Walking
Kidney donation led to 8 life-saving surgeries
Home Tags Posts tagged with "Cathedral Attack"

BANGUI, CENTRAL AFRICAN REPUBLIC (ANS – Nov. 21, 2018) — An attack on a Cathedral  in the Central African Republic has left at least 40 people dead.

More than 40 people are believed killed in the attack on the Sacred Heart Cathedral in Aliandao town, Central African Republic (CAR), 200 miles east of the capital Bangui.

On November 15, the Cathedral and its surrounding properties, a camp for internally displaced persons (IDPs) and the Bishop’s residence came under attack by armed assailants, according to Christian Solidarity Worldwide. 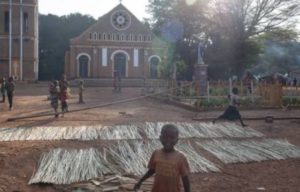 The refugee camp outside the Cathedral

The IDP camp, which had capacity for 20,000 people, was razed to the ground.  Some reports indicate that those who were killed in the camp were unable to escape from temporary structures that were set on fire. The Cathedral and its surrounding buildings were looted and residential properties nearby were also looted and burned.

Father Blaise Mada, the vicar of the diocese of Alindao, was killed in the attack and one priest remains missing.  Fr Mathieu Bondobo, General Vicar of the Archdiocese of Bangui told Vatican News that the Bishop of Alindao had been receiving threats from armed groups in the area.

The attack was reportedly carried out by the armed group Union pour la paix en Centrafrique (UPC) led by Ali Darassa, a former Seleka general, in retaliation for the killing of a Muslim man by the anti-Balaka in Aliando.

Throughout the CAR’s recent crisis the Catholic Church has opened its doors to all, regardless of their ethnicity or religion. As a result of this attack, thousands of IDPs have been displaced again and forced to hide in the bush or seek refuge in other IDP camps in the town.

Locals report that the UPC controls the mineral rich town of Alindao, imposing and collecting taxes, and reportedly restricting telephone companies from setting up communication networks in the area. Moreover, the group’s restrictions on freedom of movement have prevented communities from farming and resulted in severe food shortages, exacerbating the humanitarian crisis.

Since November 2016 the conflict in the CAR has taken on a more prominent ethnic dimension as groups belonging to the Seleka alliance and anti Balaka have fragmented. During November 2016 the UPC, whose fighters are predominantly from the Fulani ethnic group, clashed with the Front Populaire pour la Renaissance de la Centrafrique (FPRC), comprising members of the Rounga and Goula ethnic groups.  However, religiously-motivated attacks continue to occur. Earlier this year 15 people were killed in an attack on the Our Lady Fatima Catholic church in Bangui.

There has been criticism of the response of the United Nations Multidimensional Integrated Stabilization Mission in CAR (MINUSCA) to the attack in Aliandao town, with some reports indicating they were aware of threats to the church yet no peacekeepers were posted to protect the church and IDP camp. Meanwhile in New York the UN Security Council renewed the mandate of MINUSCA for one month as Security Council members continue to negotiate over the draft resolution. The draft text presented by France failed to gain the support of Russia, which has increased its role in CAR by contributing arms and security personnel.

CAR’s civil conflict assumed a religious dimension in March 2013 when Seleka, a predominantly Muslim rebel coalition, took power in a coup, suspending the constitution, dissolving the government and National Assembly, and eventually installing one of its leaders, Michael Djotodia, as president. In September 2013, Djotodia officially disbanded Seleka; however, many rebels refused to disarm and sectarian violence increased.

Sustained and severe human rights violations during the civil conflict eventually resulted in retributive violence following the emergence of anti-Seleka groups commonly referred to as ‘anti–Balaka’. Although the anti-Balaka groups have been widely described as “Christian militia,” they are in reality composed of pre-existing village defence groups bolstered by former soldiers loyal to deposed President Bozize, former Seleka fighters, angry youths seeking revenge for Seleka violations, and common criminals.

CSW Chief Executive Mervyn Thomas said: “CSW extends its heartfelt condolences to the families that have lost loved ones in this abhorrent attack. We remain deeply concerned by the reports of civilians being targeted by armed groups for their perceived religious or ethnic identity. We call on the government of CAR to bring those responsible for this attack to justice and urge the international community to support the government as it works to bring an end to the cycle of violence and the ongoing humanitarian crisis.”

Thomas continued: “We continue to urge members of the international community to fulfil their commitments and support the government of the Central African Republic as it grapples with the security and humanitarian challenges in the country. Facilitating the work of MINUSCA is an important part of that support, and we urge the Security Council to put aside other competing interests and formulate a mandate that supports the people of CAR.”