Top Posts
Knowing the One Who Always Keeps His Word
Pregnancy Resource Centers Fight For Life Amidst Opposition
This World is Not Our Home
Lessons Learned From a Gingerbread House
Let There Be Peace on Earth
‘I Wanna Dance’ movie: Whitney Houston’s success and...
Fact Finding, Sight Seeing, and Prayer Walking
Kidney donation led to 8 life-saving surgeries
The Power of Curiosity
When Love Came Down at Christmas
Home Tags Posts tagged with "Catholic Priesthood"

LAS VEGAS, NEVADA (ANS) – Dennis Daily is a broadcaster and lifelong Catholic who personally thinks that one of the toughest jobs in the religious world, right now, is to be a “good” priest.

“My heart goes out to all the young people around the world who put their trust in priests and other clergy, only to have that trust tragically betrayed,” he told ASSIST News Service (ANS) www.assistnews.net . 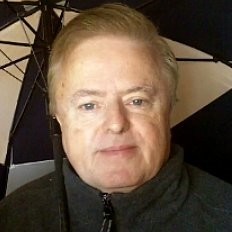 Daily said the reason he says this is that it seems time to say something POSITIVE about the members of the clergy who kept their vows and performed their duties — and did NOT put the psychological lives of their young students and parish members in danger.

“I like to think that the experiences I had in my youth with priests and nuns are NOT an anomaly. For, during the twelve years I spent in Catholic schools, I experienced no hint of anything other than genuine mentoring and positive inspiration. And, over those twelve years I must have spent 5,000 hours in very close proximity to parish priests.”

Daily said that being a rather intelligent and overly talkative lad, “I began to help our pastor work on the church bulletin when I was in sixth grade. It was not long before I was cranking out the weekly report on an old mimeograph machine in a back office of the rectory — the priests’ residence. I became the errand boy for the pastor and his two assistants. I like the responsibility very much.”

Daily continued: “My favorite priest had been sent to the parish shortly after being ordained. He was a tall, broad-smiled priest of Irish-American ancestry. I would come to find out that he was one of the best-liked young priests in our area. During his years in seminary he had excelled in everything, especially sports. He had such a calm demeanor that he was soon being called on to do marriage counseling. In my entire life, I cannot remember working with anyone who was calmer and less ruffled in times of crisis than this priest.”

Daily said by the time he got out of high school, he and the young priest “were constantly going somewhere.”

“As I mentioned, I was the priests’ unofficial errand boy. He became my main mentor. At one time, as do most Catholic boys – as least years ago – I thought I wanted to be a priest. I wanted to be just like my friend. I only feared that were I to enter the seminary I could not follow in all of his footsteps; I was not good at sports.”

“What he said to me,” Daily recalled, “and I can still see him sitting across from me in his office – was a very heavy load of information for a 16-year-old. But, it was so striking to me that I remember it, even now.

“But, what did he mean by  ‘fighting demons the rest of your life?’ Only now, in retrospect, do I realize that maybe he was ‘good priest’ ONLY because he fought off temptation. And, were that the case, those ‘demons’ that haunted him must have been very powerful ones. I later found out that one of his ‘demons’ was alcohol.”

“My instant answer was, ‘no.’ In many ways I instantly realized that I was too spoiled and too happy as I was to follow in his footsteps, no matter how much I admired him.”

Sadly, said Daily, “this marvelous man did not live that long.”

“Less than ten years after I would be graduated from high school, he died of a sudden heart attack. Today, the local Knights of Columbus chapter is named in his honor.” 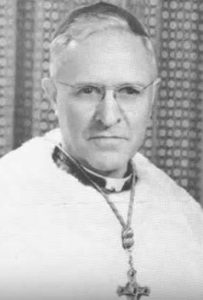 Daily went on to say: “I mentioned that my priest friend and I made numerous trips together. Many were errands to the see the bishop. His offices were about 90 minutes away in Evansville, Indiana. It was a real ego trip for me to begin to know the bishop personally.”

On one visit, Daily said, “The bishop told me that this visit was about ME, personally. ‘Dennis,’ he said, ‘you are lacking one credit enough to be graduated. But, as head of the schools I can waive that rule and you WILL get your diploma.’ 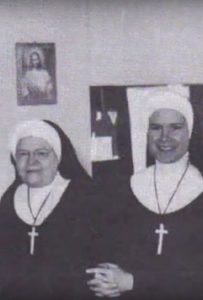 Daily appreciated the nuns who taught him

“Thank you,” was my reply. “Oh, don’t thank me,” he replied. “I’m doing it as a favor to the nuns; they don’t want to spend another year with you!”

Through all of this, Daily said, the pastor of the parish had a moderating hand.

“As much as I felt very much like a ‘buddy’ to my favorite priest, the one with whom I traveled a lot, I still feared the pastor. In spite of his gruff demeanor – he was a tough German-American cleric – I would find out, years later,  that he had a heart of gold.

“He also did a lot to ease the gap between Catholics and Protestants in my hometown of 10,000 in rural Indiana. He was one of the top members of Kiwanis, a group that drew people from all parts of the community. He was also instrumental, working with all the pastors in the city, to stage the first ecumenical prayer service there.”

Daily recalled how, on a rainy Friday in November of his sophomore year of high school, “something happened that would prove how much the other pastors of the city respected him.”

“I am speaking of the 22nd of November, 1963. During that terrible hour when the world did not know if President John Kennedy was going to survive or not, the pastor had the students from all twelve grades gather at our nearby parish church. He asked one of the altar boys to slowly toll the church bell. As he was speaking, half a dozen ministers from the neighboring churches came in. Most all the major churches in my hometown were within a four-block area.

“Our pastor asked them to speak. It was a heady moment. It was the first and only time I saw nuns cry. I always thought it would make a good scene for a movie. It was a moment when religious affiliation did not matter. It was simply a moment of prayer at a moment when prayer was very much needed,” Daily said.

The next year, the pastor’s affiliation with Kiwanis would afford Daily and three of his classmates a rare opportunity to go to New York City.

“The pastor was taking us to the National Key Club Convention. Key Club is the youth arm of Kiwanis. It was on that trip that I saw the pastor’s usually hidden ‘funny’ side for the first time,” Daily said.

As they were approaching Wheeling, West Virginia, on a new section of Interstate 70, we encountered a two-mile-long backup of traffic.

“You see, my parents and I had come through just weeks before on a trip to Washington, D.C.  Now, think with me on this. When they built I-70 through that part of Ohio, they placed it about 200 feet south of old U.S. 40 and parallel to it. But, the road was not yet finished through Wheeling. Traffic on I-70 was routed off the four-lane, up an exit ramp, then left onto a city street. When you reached the city street (there) was an old traffic light. It was never reset to allow the Interstate traffic to have the right-of-way.”

Daily remembered that, without saying anything, the pastor put the car in park, opened the trunk got into his suitcase and retrieved his Roman collar.

“He put it on and began to really look like the priest he was. He then drove down the shoulder, all the way to the traffic signal that was the cause of the problem. We got out of the car and watched as he walked to the center of the gridlocked intersection, priest’s outfit on, and began to direct traffic. Within minutes he had begun to bring all the stopped traffic down into Wheeling, eliminating the back-up.

“I kept waiting for the local police to come along and arrest the good pastor. That didn’t happen. When the traffic finally got back to normal, he took off his collar, got back behind the wheel and we pushed on, looking for our motel.”

Daily stated: “Maybe I’ve been lucky. But, I have not a single bad memory of my thousands of hours with priests … and nuns. I know others were not as lucky. But, looking back at the influence they had on me, understanding that much of what I became was the direct result of their mentoring and of their teaching me to try to be more than I thought I could be, I can only thank them for what they did. And, in retrospect, for what they did NOT do.

Dennis Daily is a lifelong journalist and radio news anchor and programmer. He spent 20 years with UPI (United Press International). During several of those years he served as the network’s Religion Editor. He previously worked as a national spokesman for USDA in Washington, was a Congressional Press Secretary, all-news anchor, and producer for “The Larry King Show.”