Top Posts
Knowing the One Who Always Keeps His Word
Pregnancy Resource Centers Fight For Life Amidst Opposition
This World is Not Our Home
Lessons Learned From a Gingerbread House
Let There Be Peace on Earth
‘I Wanna Dance’ movie: Whitney Houston’s success and...
Fact Finding, Sight Seeing, and Prayer Walking
Kidney donation led to 8 life-saving surgeries
The Power of Curiosity
When Love Came Down at Christmas
Home Tags Posts tagged with "Chaplain Kevin Williams"

CHARLOTTE, NC (ANS) — During a Law Enforcement Appreciation Breakfast & Tour at the Billy Graham Library May 13th, Kevin Williams, a chaplain manager with the Billy Graham Rapid Response Team (BG-RRT), urged officers to seek God as they fulfill their calling to protect and serve.

“You are ministers and servants of God, whether you know that or not,” said Williams, who previously served in law enforcement. Williams was a corrections officer in one of New Jersey’s toughest prisons and served at Ground Zero in the aftermath of 9/11. 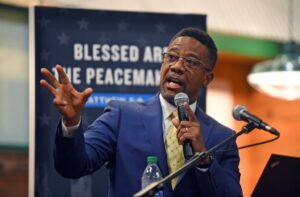 “God knows everything about you,” Williams added. “Everything down to the DNA molecule. And not only does He know everything. He is always with you. The question is are you with Him?”

In its report on the event, the Billy Graham Evangelistic Association said Williams drew from Psalm 139 as he talked with officers about the character of God and the realities of His love. Seek God and He will transform your life, Williams said.

“He will make you a new creation. Give you a new heart and mind to be able to respond to this,” Williams said.

“He knows when you were … conceived and He knows when you’re going to die,” Williams said, continuing to reference Psalm 139. “Stop worrying so much about how and when you’re going to die. Turn to God and trust Him to lead you until that day comes. Until that day comes, you have a mission. What you do is not a job. It is not a career. It’s a calling from God. … It behooves you to ask Him to help you with it.”

“Being a chaplain means you fill yourself up [spiritually] to overflowing. The overflow is for other people, and often times [as chaplains] we’re depleted. So are officers,” Maddox said. “They’re always giving out and they don’t do a whole lot of feeding. … I’m getting fed [spiritually here] so I can feed others.”

Maddox ministers at roll call and encourages officers to continually ask themselves if law enforcement is right for them.

“Just like ministers have to do, police officers have to constantly and consistently check themselves,” Maddox said. “Is this really where I want to be?

“I’m hoping that the training that’s coming into place for officers will begin to help people understand whether or not they’re supposed to be there. Because you can be qualified for everything but you’re not quality for everything. Just knowing that is important.”

Mike Doan has wrestled with this question. After nearly two decades on the force, the Charlotte-Mecklenburg police detective carries a heavy load with all he’s seen and experienced. But ultimately he feels like he’s in the right place. 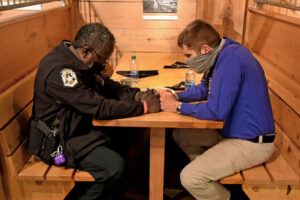 Praying with a Police Officer

But that calling is fraught with challenges. Line of duty deaths are up nine percent this year according to Officer Down Memorial Page. As of May 13, 125 U.S. officers have died. COVID-19 complications (64) and gunfire (23) account for the leading causes.

Then there’s the concern about their own safety, their families and even their communities as public sentiment seems to continually deteriorate.

The Good News? Nobody is called to do this life alone, and that goes for law enforcement officials, too. Williams closed his message with an emotional plea for officers to not only seek God, but ask Him to search their hearts, too.

“[Tell God], my soul and my spirit is broken and it needs to be mended. Help me with the anger or the hurt or the frustration that’s in my heart, God.

Every head bowed and some wiped their eyes as Williams then led the group in prayer. An “amen” later and the brief respite concluded as officers were dismissed back into the realities of their calling.