Top Posts
Knowing the One Who Always Keeps His Word
Pregnancy Resource Centers Fight For Life Amidst Opposition
This World is Not Our Home
Lessons Learned From a Gingerbread House
Let There Be Peace on Earth
‘I Wanna Dance’ movie: Whitney Houston’s success and...
Fact Finding, Sight Seeing, and Prayer Walking
Kidney donation led to 8 life-saving surgeries
The Power of Curiosity
When Love Came Down at Christmas
Home Tags Posts tagged with "Child Labor: Not Gone – But Forgotten"

Child Labor: Not Gone – But Forgotten

The words “beyond despicable” are more than appropriate to describe how more than 200 million children, as young as five years old, are trapped in “horrible and tragic”  labor conditions. 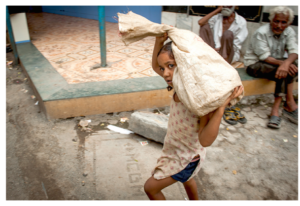 A young child in forced labour

The “beyond despicable” lable is noted by Gospel For Asia — the Christian humanitarian agency — in conjunction with World Day Against Child Labor, spotlighting the ‘horrible and tragic’ plight of children — as young as five — forced to work in horrific conditions. GFA is boosting awareness of the tragic situation, according to a soon-to-be-released report by the agency (GFA, www.gfa.org).

The annual World Day Against Child Labor highlights the plight of child laborers and campaigns to stop the labor exploitation of children in “beyond despicable” conditions.

GFA’s Child Labor: Not Gone, But Forgotten report, which will be released next month, reveals startling facts about child labor, including up to a quarter of hazardous work such as dangerous mining is done by children under age 12. Almost half of all child laborers are under age 11.

“It’s a horrible and tragic story,” said GFA founder Dr. K.P. Yohannan. “Around the world, over 200 million children as young as five years old are employed in often dangerous conditions, and a majority of those children are in forced labor or enslaved. The number is beyond our comprehension. As the Church, it is our responsibility to intercede for the exploited children and do what we can to help them.”

If the estimated 218 million children represented a country of their own, it would be the fifth largest nation in the world, exceeded in population only by China, India, the U.S., and Indonesia, the report states.

GFA says the problem could be worse than officially reported.

“Census data is likely to underestimate the scale of the crisis,” Yohannan said. “Children who are orphaned, living on the streets, or working in forced labor might go unreported. Child labor deprives children of their childhood, their potential, and their dignity.”

According to GFA, nations with the largest numbers of child laborers include Bangladesh, which is ranked number one, and the African countries of Chad, Democratic Republic of the Congo (DRC), and Ethiopia. Top “occupations” for children include working in the clothing industry, agriculture, mining, and brick making. Others work as street vendors, beggars, or garbage dump scavengers.

In South Asia, Lakshmi’s 10-year-old sister works in bonded labor – security for repayment of a debt – seven days a week, starting at 7 a.m and finishing at 9p.m.“(Her employer) treats her very badly,” Lakshmi said. “He hits her if he thinks she’s working slowly; if she talks to the other children, he yells at her. He comes looking for her if she’s sick and can’t go to work. All I want is to bring my sister home.” It would cost $8.50 to free his sister from bonded labor – but Lakshmi’s family is too poor to afford it.

GFA reported that while most countries have laws against child labor, in many of the poorest nations the laws are rarely, if ever, enforced. Around the world each year, an estimated 2.7 million people – including many children – die from work-related causes and accidents. Many others are maimed, or suffer serious work-related injuries, including amputated limbs.

An investigation by the International Justice Mission into one brick-making factory in South Asia revealed dozens of children were forced to work 16-hour days, seven days a week. “The children were beaten with a pipe and verbally abused if they were caught playing when they were supposed to be working,” Yohannan said.

Even children working in less dangerous environments are exploited with long hours, dismal pay, harsh treatment, and terrible working conditions. Bithni started working in a clothing factory in Bangladesh when she was 12, sewing pockets onto designer jeans. She has to sew 60 pockets per hour, every hour – one pocket every minute during her eight-hour shift – for which she earns one dollar a day.

“Child labor is linked to extreme poverty that enslaves nearly half the world’s population,” said Yohannan, whose Texas-based organization helps thousands of vulnerable children across South Asia, providing education, healthcare, and clean water. “We might never end child labor, but we must continue doing everything in our power to help those we have opportunity to rescue and care for in the name of Jesus.”

The author of this story, Michael Ireland, is a self-supported media missionary with ANS. Click here to support him as a missionary journalist.
June 7, 2019
FacebookTwitterPinterestEmail