Top Posts
Colorado football coach Sanders’ unabashed faith
There’s A Light That Enters Houses With No...
Knowing the One Who Always Keeps His Word
Pregnancy Resource Centers Fight For Life Amidst Opposition
This World is Not Our Home
Lessons Learned From a Gingerbread House
Let There Be Peace on Earth
‘I Wanna Dance’ movie: Whitney Houston’s success and...
Fact Finding, Sight Seeing, and Prayer Walking
Kidney donation led to 8 life-saving surgeries
Home Tags Posts tagged with "Christian Authors" 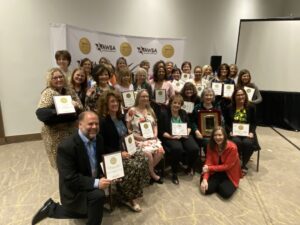 Some of the winners gathered at the 2022 Golden Scroll Awards

Advanced Writers and Speakers Association (AWSA) has announced the winners of the 2022 Golden Scroll Awards.

The Golden Scroll Awards “Book of the Year” was given to Julie Coleman for “On Purpose: Understanding God’s Freedom for Women through Scripture” (Kregel).

The “Nonfiction Book of the Year” award went to Michelle Nietert and Denise Pass for “Make Up Your Mind: Unlock Your Thoughts, Transform Your Life” (Randall House).

Among other awards handed out, DiAnn Mills received the “Novel of the Year” award for “Trace of Doubt” (Tyndale).

The “Children’s Book of the Year” was awarded to Teresa Janzen and Samuel But Agot (illustrator) for “Little Mango in a Big World” (Abundance Books LLC).

The “Children’s Nonfiction Book of the Year” was awarded to Susan U. Neal and Courtney Smith (illustrator), for “Eat God’s Food” (Elk Lake).

The “Inspirational Gift Book of the Year” was awarded to Kathy Howard for “Heirloom: Living and Leaving a Legacy of Faith” (Tyndale).

Grace Fox was honored with “Book of the Year” award for “Keeping Hope Alive: Devotions for Strength in the Storm” (Aspire Press).

Other top honors went to Sharon Tedford, who was named “AWSA of the Year,” and the “Jennifer Kennedy Dean Award” went to Lee Ann Mancini.

Eva Marie Everson was honored with the “Lifetime Achievement Award.” She is the author of over 40 books, including “The Third Path—Intimacy with God on the Path of Questioning” and her latest novel, “Five Brides,” among others.

When she’s not writing or editing, Everson’s running Word Weavers International. Everson is one of the original members and a founding board member of AWSA. She also serves as the director of the Florida Christian Writers Conference.

The awards were announced during the Golden Scroll Banquet on Sun., Aug. 14, at the Lexington Convention Center in Lexington, Kentucky. The awards were presented by Linda Evans Shepherd, founder and CEO of AWSA, and Rebecca White, author. More than 83 awards were handed out at the awards ceremony.