Top Posts
Knowing the One Who Always Keeps His Word
Pregnancy Resource Centers Fight For Life Amidst Opposition
This World is Not Our Home
Lessons Learned From a Gingerbread House
Let There Be Peace on Earth
‘I Wanna Dance’ movie: Whitney Houston’s success and...
Fact Finding, Sight Seeing, and Prayer Walking
Kidney donation led to 8 life-saving surgeries
The Power of Curiosity
When Love Came Down at Christmas
Home Tags Posts tagged with "Christian Emergency Network"

PHOENIX, ARIZONA (ANS) — As Christians celebrated the resurrection of Jesus Christ around the globe Easter Sunday, coordinated terror attacks struck three churches and hotels in Sri Lanka, which killed over 207 and injured over 450.

At least eight blasts were reported. The three churches in Negombo, Batticaloa and Colombo’s Kochchikade district were targeted during Easter services.

A temporary curfew was imposed along with restrictions in the use of social media immediately following the blasts. 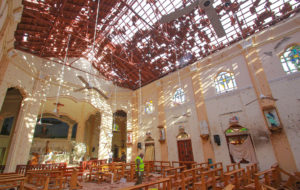 A crime scene official inspects the site of a bomb blast inside a church in Negombo, Sri Lanka REUTERS/Stringer . Dhaka Tribune

This violence ends a decade of relative peace following the Sri Lanka civil war ending in 2009. Sri Lanka is approximately 8% Christian, while the majority are Buddhist or Muslim.

Christian Emergency Network (CEN) condemned the attacks against Christians and tourists in Sri Lanka stating: “An attack on any house of worship is an attack on all people of faith.”

CEN Safety Security Officers are closely monitoring the situation and consulting with federal partners to receive any information which may be a direct nexus or threat to churches in the U.S.

CEN said there is no known threat against US Faith Based Organizations at this time. However, CEN urges churches and places of worship to exercise vigilance.

Mary Marr, Founder and President of CEN said: “This tragedy is another reminder for Christians worldwide to pray; to be vigilant and report any suspicious activity to local law enforcement; and to care for those affected by this tragedy including the Sri – Lankan citizens and families of U. S. citizens who who were killed by this attack.”

Please click here for more information on how to respond to mass casualty attacks and and how to exercise safety protocols in public places. https://www.ready.gov/public-spaces