Top Posts
Colorado football coach Sanders’ unabashed faith
There’s A Light That Enters Houses With No...
Knowing the One Who Always Keeps His Word
Pregnancy Resource Centers Fight For Life Amidst Opposition
This World is Not Our Home
Lessons Learned From a Gingerbread House
Let There Be Peace on Earth
‘I Wanna Dance’ movie: Whitney Houston’s success and...
Fact Finding, Sight Seeing, and Prayer Walking
Kidney donation led to 8 life-saving surgeries
Home Tags Posts tagged with "Christian History Institute" 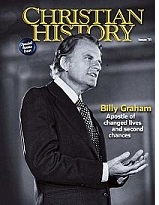 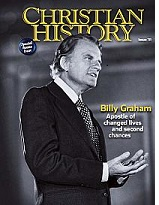 In this issue #111, Christian History magazine’s guest editorial consultant, Grant Wacker, a Duke Divinity School professor and author of America’s Pastor: Billy Graham and the Shaping of a Nation, leads a team of distinguished historians and writers who tell the epic story of Mr. Graham’s life and career, a unique contribution to the character and spirit of the evangelical church, the nation and the world.

To honor Rev. Graham, CHM has dedicated an issue to his life, his ministry, and his legacy for a reduced price of $3.99 until March 22.  For purchases of 10 or copes the price is $1.99 per issue.

The issue’s 10 articles, rare archive photos and intimate writing style documents the life and family of Billy Graham, who has personally shared the salvation message of Jesus Christ with more people than any other individual in history.

Guest editor, David Neff, former editor of Christianity Today, has assembled the talents and expertise of several leading historians and writers, to capture the essence of the life and times of America’s most prominent religious figure, Billy Graham and the Billy Graham Evangelistic Association ministry (BGEA).

Outstanding among many central themes associated with Mr. Graham in the issue, and lasting throughout his career, is his core preaching message focused on belief in Jesus and the believer’s life, lived in faith and holiness.

In addition to Graham’s primary message of salvation in Christ, the issue’s contributors have identified and examined many of Graham’s famous milestones and associations that have helped to shape the Graham legacy. These themes include:

** The 1949 Los Angles tent revival, that garnered the attention of the newspaper magnate, William Randolph Hearst, who urged his editor to pay attention to Graham

** Graham’s use of television and radio that positioned him in the living rooms of millions of Americans, where he introduced the values of evangelical Protestantism

** His commitment to world evangelism that took him throughout Europe, the Far East and Africa as an ambassador of Christ

** His interest and gift as a confidant to presidents, prime ministers and statesmen that made him a cultural influence in over 150 countries, 49 of which hosted his mass meetings that reached, in the aggregate, billions of listeners and millions of believers

** His intellectual engagement with education leaders and students that spawned seminaries, colleges and universities, helping shape a worldwide evangelical movement and revival

** His pioneering vision for racial integration that inspired the American civil rights movement – in 1953, he shockingly removed ropes that separated his audience by color – and in association with Howard Jones, a full-time BGEA associate

** Graham’s uncompromising stand for ethics and morality, setting strict rules for his own behavior and that of ministry associates, which helped prevent moral scandal and compromise that destroyed many other ministry leaders and organizations.

“No man has had more personal, one-on-one, impact for faith in Jesus Christ than Mr. Graham,” said Michael Austin, a Christian commentator and spokesperson for Christian History magazine. “He and his family are a living testimony to the faithfulness of the Biblical message he so clearly delivered from the start of his ministry. Billy Graham’s impact for good in this world is incalculable.”

These Institutions demonstrate and promote, with passion, the themes Graham expounded throughout his ministry career – living a life of faith and holiness – the pathway to eternal salvation in Christ.

Christian History magazine issues, each of which focuses on a single subject, are intended as a study guide and personal reader for the home, schools, and church libraries. 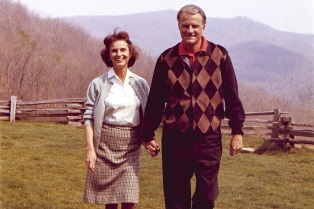 Its companion website, www.christianhistorymagazine.org , includes CHI’s entire archive of all 125 issues, downloadable files and multi-media features that are packed with information designed for fast and easy access. Programmed to serve as a self-study library or virtual encyclopedia of the Christian historic record, CHI makes a vast storehouse of reliable Christian history, easily accessible through the website’s downloadable study guides and support material.

** ASSIST News Service (www.assistnews.net) founded some 25 years ago by author, broadcaster and journalist Dan Wooding, exists to “give a voice to the voiceless” – our brothers and sisters in Christ who do not have a voice to tell the world of their suffering for Naming the Name of Christ at Work, at Home, or in the Marketplace. Would you consider a one-time or more frequent gift to help sponsor our unique News Service dedicated to providing news and feature stories about the Persecuted Church Around the World?  Please help as you can, by going to www.assistnews.net and then scroll down to where it says DONATE TO ASSIST NEWS and then put in the figure you would like to donate towards our service. If you prefer a check, just make it out to ASSIST and mail it to PO Box 609, Lake Forest, CA 92609, USA, with a note in the memo section saying: ‘Where Needed Most.’ Thank you so much on behalf of the Persecuted Church.

*** You may republish this, or any of or ANS stories, with attribution to the ASSIST News Service (www.assistnews.net  ). Please also tell your friends and colleagues that they can get a complimentary subscription to ANS by going to the website and signing up there.