Top Posts
Colorado football coach Sanders’ unabashed faith
There’s A Light That Enters Houses With No...
Knowing the One Who Always Keeps His Word
Pregnancy Resource Centers Fight For Life Amidst Opposition
This World is Not Our Home
Lessons Learned From a Gingerbread House
Let There Be Peace on Earth
‘I Wanna Dance’ movie: Whitney Houston’s success and...
Fact Finding, Sight Seeing, and Prayer Walking
Kidney donation led to 8 life-saving surgeries
Home Tags Posts tagged with "Christian persecution in Jolo" 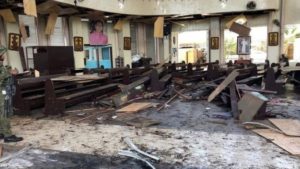 JOLO, PHILIPPINES (ANS)–Christian persecution continues in the Philippines with a recent attack in Jolo. According to Madeline Holcombe, there were  “20 killed, dozens wounded in Philippines church bombings.” Writing for CNN, Holcombe continues, “Two suspected improvised explosive devices detonated at intervals at the Jolo Catholic cathedral in the Mindanao region, according to the Autonomous Region of Muslim Mindanao. At least 81 people have been wounded, authorities said, including 14 soldiers of the Armed Forces of the Philippines (AFP) and two Philippine National Police (PNP) officers.” 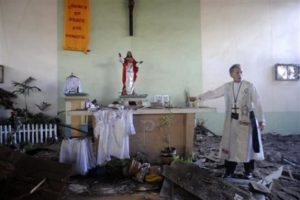 And the BBC reports, “The first blast happened as Sunday Mass was being celebrated at the church on Jolo island, where Islamist militants are active. As soldiers responded, a second device was detonated in the car park. The attack comes days after a majority-Muslim area in the region voted for greater autonomy in a referendum. No group has so far said it was behind the attack. Jolo has long been a base for militants including those of the Abu Sayyaf group.”

Videos and updates can be found on BBC.