Top Posts
Pregnancy Resource Centers Fight For Life Amidst Opposition
This World is Not Our Home
Lessons Learned From a Gingerbread House
Let There Be Peace on Earth
‘I Wanna Dance’ movie: Whitney Houston’s success and...
Fact Finding, Sight Seeing, and Prayer Walking
Kidney donation led to 8 life-saving surgeries
The Power of Curiosity
When Love Came Down at Christmas
A Walk of Faith Begins with a Step...
Home Tags Posts tagged with "Christopher Columbus faith"

Once regarded as a hero of western civilization, he is now derided as the instigator of genocidal policies that inflicted 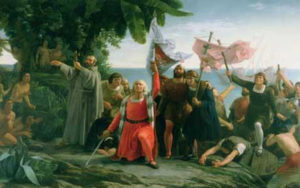 The First Landing of Christopher Columbus

sorrow, disease, serfdom, and death on the native population of Hispaniola, the island he discovered – and by extension – into the Americas.

Yet this admittedly flawed explorer also wrote in his journals of his passionate desire to serve Christ and carry the light of the Gospel to unreached people in the areas he found. He also saw himself playing a role in the fulfillment of prophecies related to the return of Christ.

“His own name, Christopher, which literally meant Christ-bearer, was to him a clear indication that God had called him to do this,” noted Peter Marshall and David Manuel, in their excellent book, The Light and the Glory. “He would quote in his journal such lines of Scripture as those in Isaiah, which meant so much to him:

‘Listen to me, O coastlands, and hearken, you peoples from afar. The Lord called me from the womb, from the body of my mother he named my name…I will give you as a light to the nations, that my salvation may reach to the end of the earth.’” (Isaiah 49:1,6)

Under the Pax Mongolica or Mongol peace, Europeans had enjoyed peaceful passage from Europe to Asia along the Silk Road. But after the Ottoman Turks captured Constantinople in 1453 establishing Sunni Islam as the state religion spread by jihad, the Silk Road became impossibly dangerous for Europeans to traverse.

As an alternative, Columbus was one of many seeking an ocean route to China, India and Japan, but only he was convinced he could travel west, by his calculations voyaging from the Canary Islands to Japan in only 2760 miles.

But when he sought funding for his expedition from the monarchs of Portugal, Spain, France and England his plan was roundly rejected as uncertain, mad, and “utterly impossible to any educated person.”

However, Columbus was convinced that Ferdinand and Isabella of Spain – because of their devotion to Christ – were the ones God chose to bring the Gospel to undiscovered lands. They had been preoccupied with wresting Islamic control over southern Spain from the Moors.

After the Spanish monarchs rejected his proposal in 1490, Columbus sought refuge and advice at the Franciscan monastery, La Rabida. He poured out his heart one night to the Queen’s confessor, Father Juan Perez, about his disappointments and dreams.

“On the following morning, Father Perez dispatched a messenger to the Queen, stating that he was convinced that God’s hand rested upon Christopher Columbus, and urging Her Majesty to reconsider his proposal,” Marshall noted.

In late 1491, Queen Isabella invited Columbus to join her in Santa Fe, outside the walls of Granada. When he arrived, the Moors were poised to surrender, and Columbus bore witness to the last Muslim foothold in Europe removed. The timing could not have been more fortuitous, because in the exhilaration of the moment, Ferdinand and Isabella finally agreed to his plan.

In preparing for his trip, Columbus noted that others had failed when they attempted to sail west from the Azores due to strong headwinds. But if he dropped below the Tropic of Cancer and headed west from the Canary Islands, he figured the wind would be at his back.

Columbus realized it should be possible to follow those winds to his destination, then head north and catch the prevailing winds back to Spain. “It was that simple, but no one had ever thought of it before,” Marshall noted.

Columbus regarded it as a revelation from God.