Top Posts
Colorado football coach Sanders’ unabashed faith
There’s A Light That Enters Houses With No...
Knowing the One Who Always Keeps His Word
Pregnancy Resource Centers Fight For Life Amidst Opposition
This World is Not Our Home
Lessons Learned From a Gingerbread House
Let There Be Peace on Earth
‘I Wanna Dance’ movie: Whitney Houston’s success and...
Fact Finding, Sight Seeing, and Prayer Walking
Kidney donation led to 8 life-saving surgeries
Home Tags Posts tagged with "City of Sodom"

ALBUQUERQUE, NEW MEXICO (ANS)—In a previous article written for ANS News concerning the International Symposium on Archaeology and the Bible, mention was given to a presentation given by Drs. Phil Silva and Malcolm LeCompte concerning findings at the Tall el-Hammam archaeology site in Southern Jordan. 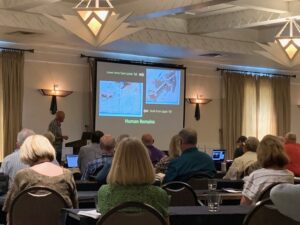 In the article it was stated, “Many believe Tell el-Hamman is the ancient city of Sodom.  Due to a forthcoming academic article, published in a major scientific journal, this article is unable to discuss the findings.  Suffice to say, after the presentation many scholars rushed to the front of the room to chime in on his or her position concerning Tall el-Hammam.  If the presentation is correct, however, the implications are momentous.”

With the release of the academic paper via Scientific Reports, the “momentous” news has been revealed.  What Drs. Phil Silva, Malcolm LeCompte, and a team of scientists propose is that the event described in Genesis 19 was in fact an airburst, causing catastrophic destruction.  According to Earth Date, “Airbursts are violent explosions that occur when mid-sized meteors streak through the atmosphere, disaggregating as they begin to burn up.” 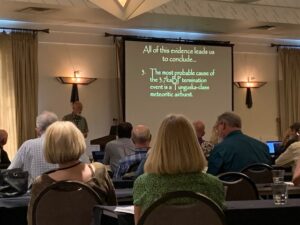 Dr. Silva presenting at the International Symposium on Archaeology and the Bible

As Dr. Silva stated in his International Symposium on Archaeology and the Bible presentation, “The most probable cause of the 3.7kaBP termination event [at Tall el-Hammam] is a Tunguska-class meteorite airburst.”

And here’s the thing, Drs. Phil Silva and Malcolm LeCompte have evidence to back up the claim that the Sodom annihilation was, in fact, an airburst incident.  To read the entire article, please click here: https://www.nature.com/articles/s41598-021-97778-3