Top Posts
Knowing the One Who Always Keeps His Word
Pregnancy Resource Centers Fight For Life Amidst Opposition
This World is Not Our Home
Lessons Learned From a Gingerbread House
Let There Be Peace on Earth
‘I Wanna Dance’ movie: Whitney Houston’s success and...
Fact Finding, Sight Seeing, and Prayer Walking
Kidney donation led to 8 life-saving surgeries
The Power of Curiosity
When Love Came Down at Christmas
Home Tags Posts tagged with "Coralles"

Growing up in a Goth culture in the 1980’s, the recent interest in Dark Academia aesthetics (think schoolish-goths: old books, philosophy, tea, and fountain pens) is of some interest to me.  I was one of those schoolish kids interested in theology, philosophy, art, writing (specifically poetry), music, and tea.  I performed in an underground goth band, wrote, and sat long hours contemplating ideas far too heavy for my adolescent mind.  Maybe that’s why I took up Theo-poetics as an adult, combining my interest in theology, philosophy, and artistic pursuits. 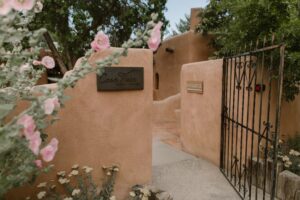 So, when I heard a story about two dead monks possibly buried in an old  wall in a small town in New Mexico my ears perked.

The town is Corrales, New Mexico—just north of Albuquerque, situated along the Rio Grande River.  The building is now Casa Vieja, recently a restaurant, now a brewery.  I learned of the fabled rumor from the former owner, Gary Socha.  After showing me a painting found in the walls of French Duke Jean Louis de Nograt de La Valette (1554-1642), Socha proceeded to tell me that the building was once a monastery or a hermitage for a time, which accounts for some of the church-like ambiance. How the painting got there, scholars don’t know.  The painting was found by a contractor, covered in mud and water.  Later restored, the painting now hangs in the entryway.

“If you think this is bizarre,” Socha continued, “then you’d be interested to know that there’s rumored to be two dead monks buried in the walls along with a golden relic.”

How’d you hear about this, I ask?

“Community members told me, saying it’s a well-known fact.  So, I followed up.  I went to the University of New Mexico. The professors denied that there were dead monks, but one must wonder. To date, nothing has ever been found.” 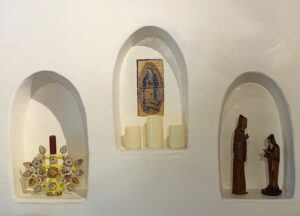 Nicho art found in the room adjacent to the chapel. Photo: Brian Nixon

The building in question was built in 1772 within a Native community, six years before the United States became a country.  Set within Pueblo culture and colonized by Spain, the building became home for the Martinez family in the early 1880’s, later made into a hermitage or monastery. After adapting to various businesses, the Harrington family purchased the home in the 1940’s, where it was renovated. Mrs. Dorothy Harrington named the building Casa Vieja, or Old House.

Socha didn’t know much about the building as a monastery, but reasoned it was around the mid-1800’s, providing the building with its church-like atmosphere.  He did say the main room was once the chapel and housed monks. 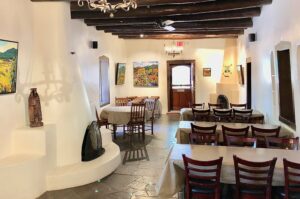 Though archeologist have yet to discover any human remains in walls, there is an interesting time frame correlation to a traveling Italian monk-hermit, Giovanni Maria Agostini.

Born around 1800, Agostini studied theology and joined the Order of St. Anthony of monks in 1819, taking the vow of poverty, chastity, obedience, and humility.  After determining his calling was to travel, ministering and living the life of a hermit and preacher (often placing crosses in all the areas he ministered), Agostini left on a world-wide spiritual odyssey. After spending time in parts of Europe and South America (rowing down the Amazon), Agostini traveled to Canada and the US, ministering in Missouri, Kansas, and New Mexico. While in New Mexico, Agostini set-up shop in Las Vegas (two hours north of Casa Vieja). Living in a cave—in what is now called “Hermit’s Peak”—Agostini used his knowledge of botany and medicine to act as a doctor of sorts.  His fame spread. One wonders if he crossed paths with the monks in Corrales.

Later, he left Northern New Mexico and went south, ending up in Mesilla, New Mexico (now an enclave of Las Cruces).  Again, his scientific knowledge and deep faith made him well known in the region.  He retreated to caves, keeping his friends aware of his well being by lighting a daily fire.  In 1869, when a fire was not lit, friends checked on him.  They found him dead outside of the cave, lanced twice and hit over the head, the result of a murder.  The murder is unsolved to this day.  Many speculate that it was not robbery, due to the silver cross and other items of monetary value that were left intact, including extensive journals and books (now lost, but quoted from in newspaper articles). Something more mysterious was at work.  Agostini is buried at the Mesilla Cemetery. And contrary to some speculators, the murder was not conducted by a gang associated with Billy the Kid (who is known to frequent Mesilla).  Billy did not rise to attention until the 1870’s, having his first known shootout and murder in Arizona in 1877 (where he fled from New Mexico for a time).  Plus, Billy the Kid seemed to like the underdog, which would include a traveling hermit.  A crime of this caliber was not in the Kid’s arsenal.

It’s not hard to reason that the news of Agostini’s death traveled north to the former territory he ministered, whereby rumors began to spread of other monks’ death and burial, a burial with relics, leading to rumors concerning the Corrales monks.  It’s all quite fascinating. Only time and archeology will tell the true story.

If one thing is clear, dark aesthetics and dead monks are alive and well in New Mexico: mysterious art, old buildings, monks, and a traveling hermit—intermixed with legend and lore. 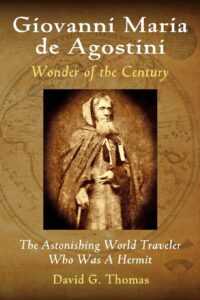 To learn more about why Dark Academia is popular, click here: https://bookriot.com/what-is-dark-academia/

To learn more about Giovanni Maria de Agostini, read David G. Thomas’ book “Giovanni Maria de Agostini: Wonder of the Century.”  You’ll be amazed the life this traveling monk lived.  Interestingly, Thomas suggests Agostini was murdered by Native warriors.  Other possible, but less likely candidates, are a priest named Father Chavez (who was tried, but the charges dropped), an assassin named Chacon, and a gang of bandits.