Top Posts
Knowing the One Who Always Keeps His Word
Pregnancy Resource Centers Fight For Life Amidst Opposition
This World is Not Our Home
Lessons Learned From a Gingerbread House
Let There Be Peace on Earth
‘I Wanna Dance’ movie: Whitney Houston’s success and...
Fact Finding, Sight Seeing, and Prayer Walking
Kidney donation led to 8 life-saving surgeries
The Power of Curiosity
When Love Came Down at Christmas
Home Tags Posts tagged with "Craig von Buseck"

CHARLOTTE, NORTH CAROLINA (ANS) — In May of 1948, as the British Empire ended their mandate and withdrew from Palestine, five Arab nations sat on the border — ready to invade.

At that moment, David Ben-Gurion, the leader of the Jews, stood in Tel Aviv and declared the establishment of the State of Israel — marking the rebirth of a Jewish nation in the Holy Land after 2,000 years in exile. 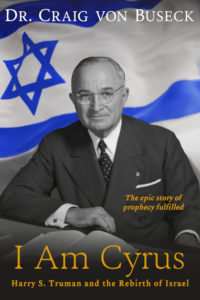 I Am Cyrus cover artwork

In “I Am Cyrus: Harry S. Truman and the Rebirth of Israel,” author Craig von Buseck tells the epic story of Israel’s rebirth — promises made, promises broken, and ultimately the fulfillment of the ancient prophecy that this people would indeed return to their Promised Land.

“I first heard the story of Harry Truman and Eddie Jacobson in 1988 when I listened to a tape from Friends of Israel,” Craig explained, “I never forgot it. In 2012, I sensed that I needed to write the book that had been on my heart for all those years.”

“I began with a research trip to the Harry S. Truman presidential library in the fall of that year. That was followed by five years of research and writing.”

Craig worked diligently to support the claims of the book – and to refute the propaganda and misinformation often heard in the media, in colleges, and in many public schools – with more than 1,200 citations in the end notes.

Beginning with the birth of both the Zionist Movement and Harry Truman in the 1880s, I Am Cyrus chronicles the growth of Zionism and the unlikely emergence of Harry Truman on the American political stage. It then describes the prophetic and historic days leading up to the rebirth of Israel – and the vital role Harry Truman and his former business partner, Eddie Jacobson, played in those crucial moments.

Learn how “a nation was born in a day” in I Am Cyrus: Harry S. Truman and the Rebirth of Israel, coming April 22nd from Craig von Buseck and LPCBooks. 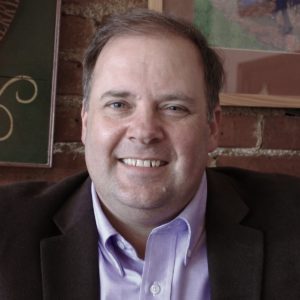 Dr. Craig von Buseck is the Editor of Digital Content for www.Inspiration.org , the website of Inspiration Ministries in Charlotte, North Carolina. He is an author and a popular speaker. His books include Nobody Knows: The Harry T. Burleigh Story; Praying the News, co-written with 700 Club co-host, Wendy Griffith; and Seven Keys to Hearing God’s Voice. He is a contributing writer for CBN.com, MTL Magazine, Charisma Magazine, and Generals.org. He holds a Doctor of Ministry and an MA in Religious Journalism from Regent University.

Before I Am Cyrus, Craig’s most recent book was “Nobody Knows: The Harry T. Burleigh Story.” Craig is also the author of “Praying the News,” co-written with 700 Club co-host Wendy Griffith; “NetCasters: Using the Internet to Make Fishers of Men”; “Seven Keys to Hearing God’s Voice”; and other ghost-written books.

Craig has extensive speaking experience and travels often to speak at conferences, professional and ministry events, and writer training seminars. Craig served for twelve years as Ministries Director and Programming Director for CBN.com, one of the world’s most popular Christian websites. He also served for more than ten years on the Executive Board of the Internet Evangelism Coalition (IEC).

Gordon Robertson, Chief Operating Officer, The Christian Broadcasting Network, Co-host of The 700 Club, writes in the foreword: “I am pleased to endorse I Am Cyrus: Harry S. Truman and the Rebirth of Israel by Dr. Craig von Buseck. In this thoroughly researched and documented book, Craig tells this story, reaching back into antiquity to make the case for the presence of the Jews in their homeland, Eretz Israel.

“I believe it is important for people everywhere to know the full story, and the truth behind the rebirth of Israel in the land the Romans renamed Palestine.  This book shows how God’s hand was upon Israel at its rebirth and then you will see how his hand remains upon Israel today.”

Barry Shaw, International Public Diplomacy Associate at the Israel Institute for Strategic Studies, said: “Craig von Buseck must be applauded for his well-stocked and researched book. A must read for everyone interested to learn more about the Jewish State of Israel.”

“I highly recommend von Buseck’s book as a rich addition to one’s understanding of the times when prophecy came alive and a ‘nation was born in a day,’” said Chris Mitchell, CBN News Middle East Bureau Chief, Jerusalem

Isik Abla, Social Media Evangelist to the Muslim World, said: “As a former Muslim who was born and raised in the Middle East for the first 25 years of my life, I couldn’t find a better source to make me understand the divine purpose of the Messiah for Israel. I’m in awe of how the Holy Spirit led each and every pen stroke to paint such a masterpiece.”

“What an amazing story – all of it true!” said Dr. Michael L. Brown, President, FIRE School of Ministry, host, the Line of Fire radio program, adding: “The book reads like a novel, but it is well-researched and carefully documented, giving the background to the miracle of modern Israel and the unique role played by President Harry Truman, the Cyrus of his day. What a timely and enjoyable read!”

Janet Parshall, Nationally Syndicated Talk Show Host, commented: “The story of how the nation of Israel came to be is one of the most fascinating in human history.  God has never turned His back on His chosen people and He always surprises us on how His promises to them are fulfilled. Read this book to be reminded again that God does and always will intercede in the affairs of mankind.”

“I Am Cyrus: Harry S. Truman and the Rebirth of Israel is the fascinating inside story of how God chose a Bible-believing farm boy from Missouri as his unlikely point man to make it all happen. Dr. Craig von Buseck lays out President Harry Truman’s journey from wartime president to modern-day Cyrus, and the enduring special relationship between the United States and Israel that he helped spark, in gripping detail. I Am Cyrus is an absolute must read for anyone who wants to know more about the prophetic times that we are living in and why Israel is—and always will be—at the center of God’s divine plan,” writes Erick Stakelbeck, Host, TBN’s The Watchman.

Doug Hershey, Author, Israel Rising: Ancient Prophecy Modern Lens, said: “At a time when so much of Israeli and Jewish history is being twisted or subtly rewritten, a documented history book like this is right on time. We are in a time when biblical prophecy, history and current events are colliding in Israel and so few today seem to recognize the profound implications of what that means. For those looking into that convergence, I Am Cyrus should be on their reading list! –