Top Posts
Colorado football coach Sanders’ unabashed faith
There’s A Light That Enters Houses With No...
Knowing the One Who Always Keeps His Word
Pregnancy Resource Centers Fight For Life Amidst Opposition
This World is Not Our Home
Lessons Learned From a Gingerbread House
Let There Be Peace on Earth
‘I Wanna Dance’ movie: Whitney Houston’s success and...
Fact Finding, Sight Seeing, and Prayer Walking
Kidney donation led to 8 life-saving surgeries
Home Tags Posts tagged with "Cuban Evangelical Leaders"

CUBA (ANS) — Three evangelical leaders were prevented from boarding flights from Cuba to the United States on Saturday and Sunday July 13-14 as they attempted to travel to Washington, DC to participate in the Ministerial to Advance Religious Freedom, which takes place this week.

Christian Solidarity Worldwide (CSW) reports Cuban government officials told the heads of the Assemblies of God and the Evangelical League, and a leader in the Apostolic Movement, that they are prohibited from leaving the island. 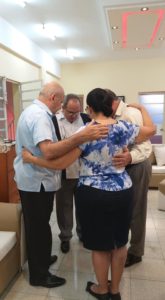 Leaders of the Cuban Evangelical Alliance gathered in prayer

This followed the arbitrary detention of religious freedom defender Ricardo Fernandez Izaguirre, who was seized off the street by Cuban state security in Havana at noon on 12 July. He has not been seen or heard from since.

CSW said two of those affected, Reverend Moises de Prada, Superintendent of the Assemblies of God in Cuba and Reverend Alida Leon Baez, President of the Evangelical League of Cuba are founding members of the newly established Cuban Evangelical Alliance (AIEC by its Spanish initials). A third AIEC leader, the president of the Baptist Convention of Cuba, was informed that he would not be permitted to leave the island two weeks ago when he attempted to renew his passport.

Reverend Leon Baez issued a statement on Monday saying: “According to the Immigration Law in my country, of everyone who lives in the national territory, the only people who are not allowed to leave Cuba are those who are subject to criminal proceedings or in cases of concern for defense and national security or reasons of public utility. I do not believe that this is my case. I do not have any pending judicial processes against me. I do not consider myself a threat to the security and defense of the country where I was born and live. And if there was even a minimum reason of public utility, I think that one should be notified about it in advance and given enough time to allow me the opportunity to defend myself; not waiting until the very last minute to inform me of this decision. I cannot conceive of a country where the inalienable right to move freely can be limited without determining causes and without adequate notification in terms of time. Even the worst criminals are notified of accusations against them and informed that there will be a trial before they arrive at a court.”

In a statement published on Saturday night, Alain Toledano Valiente, a leader in the Apostolic Movement, said: “This Saturday, July 13, 2019 at approximately 7:30 pm, while going through customs after checking in for my flight, a customs official named Eliécer informed me that Cuban Counterintelligence has placed a regulation on me and that I am not permitted to travel. Once again I am imprisoned in the nation of Cuba, my rights as a citizen of Cuba have been stripped away. ” The Apostolic Movement is a network of charismatic churches that the government has refused to register.

CSW said the religious leaders expressed surprise at learning of their status, pointing out that some of them had traveled to Europe and South America as recently as two weeks ago without any problems. While the Cuban government abolished the need for an exit visa for Cubans citizens in 2013, in recent years the authorities have regularly blocked human rights defenders and pro-democracy activists from leaving the country by declaring them to be ‘regulated.’ It is difficult for Cubans to ascertain whether or not they are on the regulated list before traveling. There is frequently no reason given and there is no way to appeal.

CSW’s Head of Advocacy Anna Lee Stangl said: “By arbitrarily denying the right to travel outside of Cuba to these three religious leaders, who represent some of the largest Protestant groups in the country, the Cuban government has made clear that its policies of control and intimidation have not changed. CSW stands with all those who have been prevented from being in Washington DC this week to participate in the Ministerial to Advance Religious Freedom, and will ensure that their voices are heard even if they are not able to be physically present. We call on the Cuban government to remove all arbitrary travel restrictions on these leaders and also continue to call for the immediate release of Ricardo Fernandez Izaguirre for whom CSW remains deeply concerned.”

Note: The full statements of the religious leaders will be shared at a briefing today on Capitol Hill in SVC-215 at 3:30pm, Washington, DC at a side event for the Ministerial to Advance Religious Freedom.