Top Posts
Colorado football coach Sanders’ unabashed faith
There’s A Light That Enters Houses With No...
Knowing the One Who Always Keeps His Word
Pregnancy Resource Centers Fight For Life Amidst Opposition
This World is Not Our Home
Lessons Learned From a Gingerbread House
Let There Be Peace on Earth
‘I Wanna Dance’ movie: Whitney Houston’s success and...
Fact Finding, Sight Seeing, and Prayer Walking
Kidney donation led to 8 life-saving surgeries
Home Tags Posts tagged with "Dan Wooding tribute" 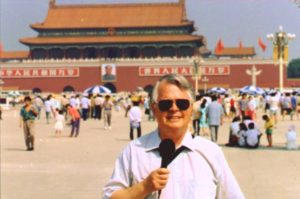 for the suffering church, has passed to his reward on March 18th. He was 79.

The founder of ASSIST News Service graduated to heaven following a two-year battle with cancer. A back injury in the last several months left him bedridden and in a state of decline that hastened his homecoming with the Lord.

Once a correspondent for the National Enquirer and a staffer on two of Britain’s sensational tabloids, a powerful encounter with God caused him to devote his writing skills to reporting about the plight of persecuted Christians in restricted countries.

Dan gave me a start as a Christian journalist in 1999 and I will always be grateful for his encouragements. We also recorded a radio program together for many years, “Window on the World,” broadcast over Calvary Chapel’s radio network and through Dan’s personal network of broadcasters in countries around the world.

We met for the first time at his modest office in Garden Grove, California, which he shared with his devoted and saintly wife, Norma, who handled their books. I could immediately tell there was nothing improper going on financially with their ministry because of their humble lifestyles. Dan probably found the least expensive office in the county and Norma counted every penny to make sure it was handled properly.

I also visited their home in Lake Forest, a doublewide trailer that was furnished unassumingly — with Norma’s delicate and refined touch.

Born to missionary parents in Plateau State, Nigeria, in 1940, Dan liked to joke that he was African-American. His bubbly personality and ever-present, infectious humor was endearing to so many who were privileged to call him a friend. Also a gifted raconteur, he could regale his listeners with stories behind the headlines, which often could not be shared publicly.

His parents, Alfred and Anne, met at the Sudan Interior Mission (SIM) language school, fell in love, and were married at the SIM church in the walled city of Kano.

They began to serve as missionaries in a small mud-hut village called Izom.

When Dan was born, the local chiefs gave him the Hausa name of Dan Juma (Son of Friday), even though he was born on a Thursday. “The problem was the news of my birth hadn’t arrived in the village until the following day, and my father had decided not to tell the chiefs that they had the wrong day,” Dan recounted later.

After Dan’s father got sick with malaria, the family was forced to return to England, where Dan was raised.

He launched his journalistic career in 1968 in London with The Christian, Britain’s oldest evangelical newspaper, owned by Billy Graham. At the paper, Dan interviewed Coretta Scott King, the widow of Martin Luther King, Jr., and the legendary black Gospel singer, Mahalia Jackson.

Writing for the Middlesex County Times in Ealing, London, he wrote some of the earliest stories about Monty Python and was captivated by their humor.

Wooding was also a London-based correspondent for the National Enquirer, America’s largest circulation tabloid and later as a senior reporter with London’s Sunday Mirror.

While covering a story about a gangster, Dan’s life was threatened at the notorious Fleet Street pub called The Stab in the Back. The dramatic experience caused him to rededicate his life to Christ. A subsequent reporting trip to Uganda, where he witnessed the horrors of Idi Amin’s regime, caused him to leave the tabloids behind and begin to specialize in eyewitness coverage about persecuted Christians

His weekly commentary about persecuted Christians was broadcast for 10 years on the UPI Radio Network.

He worked as a writer and broadcaster with Billy Graham in Russia, Germany and Puerto Rico. He wrote a cover story about Billy and Ruth Graham for the Saturday Evening Post in 1996.

Dan and Norma founded ASSIST (Aid to Special Saints in Strategic Times) Ministries and ASSIST News Service, which transmitted stories to 2,600 media around the world.

Always prolific, Dan wrote 41 books. One of his books, Blind Faith, which he co-authored with his 93-year-old mother, tells the moving story of her work as a pioneer missionary to the blind in Nigeria. Queen Elizabeth honored that inspiring work.

Dan is survived by his wife of 56 years, Norma, his two sons Andrew and Peter, and six grandchildren. Dan and Norma lived in the U.S. for 36 years and returned home in 2018 to be close to their family.

Wooding’s sons request prayer for Norma as she grieves the loss of her beloved husband.