Top Posts
Knowing the One Who Always Keeps His Word
Pregnancy Resource Centers Fight For Life Amidst Opposition
This World is Not Our Home
Lessons Learned From a Gingerbread House
Let There Be Peace on Earth
‘I Wanna Dance’ movie: Whitney Houston’s success and...
Fact Finding, Sight Seeing, and Prayer Walking
Kidney donation led to 8 life-saving surgeries
The Power of Curiosity
When Love Came Down at Christmas
Home Tags Posts tagged with "Danny Agee"

TEMPLE, TEXAS (ANS) – Almost everyone knows that Sunday is the one day of the week the fast food chain Chick-fil-A famously closes its doors to allow employees to both rest and worship.

However, according to Gabriel Kinder, reporting for CNN, this Easter Sunday, the chicken restaurant bent its rules to help a very sick boy — thanks to a nurse at McLane Children’s hospital in Temple, Texas. 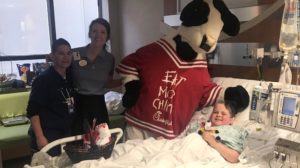 CNN said ten-year-old Danny Agee was rushed to the hospital on Easter, unresponsive and unable to breathe on his own, his father Joey Agee said. It turned out that he had a brain tumor causing a dangerous buildup of fluid.

Doctors immediately placed a drain that stabilized the pressure on Danny’s brain. But he was not out of danger. A neurosurgical team prepared to operate the next morning.

The CNN report said that when nurses removed Danny’s breathing tube so he could take his first sips of water since his ordeal began, he also asked for food. He had not been able to eat anything for nearly the entire day.

When his doctor said he could eat anything he wanted, Danny asked for nuggets from Chick-fil-A.

After being told the restaurant was closed, Danny was ready to settle for other fast food options — but his primary care nurse Jenny Pearce had another idea. Her brother-in-law had previously worked at a nearby Chick-fil-A, she told CNN, and she figured it wouldn’t hurt to try to call in a favor to see if someone could quickly cook up a few chicken nuggets.

CNN reported that within hours, the restaurant came through with what Pearce described as the largest platter of chicken nuggets that she had ever seen, along with an Easter basket full of swag and the Chick-fil-A mascot to hug Danny.

Joey Agee captured the moment on video which he posted on Facebook and said Danny was overwhelmed with joy at the whole experience.

Pearce said that what you can’t see in that video, is that everyone else in the room was crying along with Danny. Because of her kind gesture, Joey Agee said Pearce is now a part of their family — whether she wants to be or not.

CNN said Danny’s surgery the next morning was a success and he was released from the hospital. Now, the Agees are planning the big Easter dinner at home that Danny missed while in the hospital.

CNN said Joey Agee believes this isn’t so much a story about Danny being strong or Chick-fil-A going above and beyond. He said it’s about “allowing God to work through you and for you — and if you do, miracles still happen.”