Top Posts
Pregnancy Resource Centers Fight For Life Amidst Opposition
This World is Not Our Home
Lessons Learned From a Gingerbread House
Let There Be Peace on Earth
‘I Wanna Dance’ movie: Whitney Houston’s success and...
Fact Finding, Sight Seeing, and Prayer Walking
Kidney donation led to 8 life-saving surgeries
The Power of Curiosity
When Love Came Down at Christmas
A Walk of Faith Begins with a Step...
Home Tags Posts tagged with "East Caribbean Sea"

COCONUT CREEK, Fla. (ANS) – About 20,000 people were forced to evacuate their homes, with 12,000 taking refuge in a mix of government-run or private shelters, or staying with family or friends, following a series of volcanic eruptions on the island of St. Vincent in the eastern Caribbean Sea early last month.

Support for families unable to return to their homes on the island following the volcanic eruptions continues to pour in from Food For The Poor’s generous donors and from partners on neighboring islands.

Heavy rains last week brought flooding and landslides, bringing more misery to those affected by the eruptions and ash. Hurricane season is less than four weeks away. 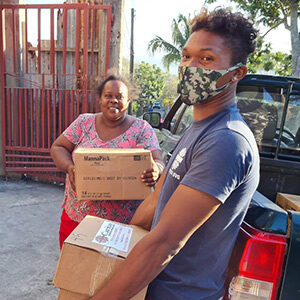 The Catholic Diocese of Kingstown is overseeing the distribution of relief items.

Food For The Poor reports the Catholic Diocese of Kingstown, the charity’s partner, continues to deliver critically needed supplies to families, in some cases in the pouring rain.

“The packages we gave to parishioners and other needy persons in the community were well received and appreciated,” said Fr. Kevin Murray, of the Diocese of Kingstown, after visiting with a parishioner in Belle Vue.

“I saw the happy faces of many when we took it to those who could not come,” Fr. Murray added. “It was touching, especially when they said, ‘Thanks and God bless you. Thank you, Father, and those who donated the items.'”

Jisabelle Garcia-Pedroso, FFTP’s Senior Programs Manager for Operations, said the spirit of the people in St. Vincent and the Grenadines remains strong.

“They really, really hold on to God’s promise,” she said. “As we had a boat that was delivering goods from St. Lucia into St. Vincent, one of the guys driving one of the barges looked over at all of these goods, all of these communities coming together and he said, ‘This is where God multiplies.'”

This week, Food For The Poor-Jamaica is sending two tractor-trailer loads of aid to St. Vincent and the Grenadines.

“The outpouring of support has been tremendous,” said Kivette Silvera, Executive Director of Food For The Poor-Jamaica.

“We really appreciate our donors,” she added. “We give God thanks that we’ve been able to help even more families during this critical time.”

The disaster began on April 9 with the first eruption of La Soufrière on the northern tip of the island, continuing with a series of eruptions over the next few weeks that blanketed buildings and cars with a thick layer of ash and forced thousands of residents to evacuate.

FFTP plans to ship two additional containers of aid from partners over the next month, bringing the total to nine, containing items such as cleaning supplies, goggles and masks, hard hats, personal hygiene items, medical supplies, food and clothing.

The charity also is purchasing cleaning supplies that will be shipped to St. Vincent and Barbados, both of which are affected by ash.

Shortly after the eruption, the charity airfreighted a disaster relief kit to Barbados, and those goods, along with relief items from FFTP’s partners in Trinidad and Tobago, Grenada and St. Lucia, were shipped to the island of St. Vincent and are being distributed by the Catholic Diocese of Kingstown.

The charity and its partners are preparing for the next phase of relief once it’s safe to return to the evacuation zones closest to the volcano.

In South Florida, FFTP is collecting essential goods to help families affected by the eruption. Goods can be dropped off at the charity’s Coconut Creek warehouse, 6401 Lyons Road, from 9 a.m. to 4 p.m. weekdays. Masks and social distancing are required.

For more information on the items that are being accepted, please go to www.foodforthepoor.org/vincentrelief.

Donors also can provide relief items via Food For The Poor’s Amazon charity list at www.foodforthepoor.org/emergencysupplies.

To make a cash donation for families in St. Vincent and the Grenadines, please go to www.foodforthepoor.org/vincent, or call 1-800-427-9104.