Top Posts
Colorado football coach Sanders’ unabashed faith
There’s A Light That Enters Houses With No...
Knowing the One Who Always Keeps His Word
Pregnancy Resource Centers Fight For Life Amidst Opposition
This World is Not Our Home
Lessons Learned From a Gingerbread House
Let There Be Peace on Earth
‘I Wanna Dance’ movie: Whitney Houston’s success and...
Fact Finding, Sight Seeing, and Prayer Walking
Kidney donation led to 8 life-saving surgeries
Home Tags Posts tagged with "Easter Sunday attack"

COLOMBO, SRI LANKA (ANS) — At least 200 people have been killed and at least 450 injured in multiple bombings  at three churches and several hotels in Sri Lanka over Easter.

News sources, including the BBC, said eight blasts were reported. Three churches in Negombo, Batticaloa and Colombo’s Kochchikade district were targeted during Easter services. The Shangri-La, Kingsbury, Cinnamon Grand and a fourth hotel, all in the capital Colombo, were also hit. 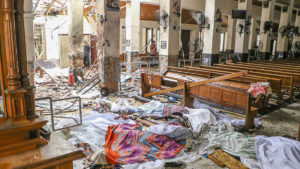 An inside view of the St. Anthony’s Shrine after an explosion hit the church in Kochchikade in Colombo, Sri Lanka . (Photo by Chamila Karunarathne/Anadolu Agency/Getty Images)

According to the BBC, a national curfew has been put in place “until further notice” and social media networks have been temporarily blocked and reports say seven people have been arrested, but it not yet clear who is responsible for the attacks.

Sri Lanka’s defence minister has said the attacks were probably carried out by one group. Several suspects have been arrested.

St Sebastian’s church in Negombo was severely damaged. Images on social media showed its inside, with a shattered ceiling and blood on the pews. Dozens of people are reported to have died there.

There were heavy casualties too at the site of the first blast in St Anthony’s, a hugely popular shrine in Kochchikade, a district of Colombo.

Among those killed in Colombo were at least nine foreign nationals, hospital sources told the BBC. Hospital sources in Batticaloa said at least 27 people had died there.

A hotel official at the Cinnamon Grand, near the prime minister’s official residence, told AFP (Agence France Presse) the explosion there had ripped through a restaurant, killing at least one person.

A seventh explosion was later reported at a hotel near the zoo in Dehiwala, southern Colombo, with police sources reporting two deaths. The zoo has been closed.

An eighth explosion was reported near the Colombo district of Dematagoda. Media say it was suicide bomber and that three people, believed to be security personnel, were killed during a police raid.

The BBC said local media report that security has been stepped up at the country’s main Bandaranaike International Airport.

The BBC also said rumours have been reported of more attacks and police have told people to stay inside their houses and remain calm. But there is some element of panic.

The BBC report said there is a heavy military presence in front of all major state buildings. It also said that after the Tamil Tigers were defeated in 2009, Sri Lanka hasn’t really seen this kind of incident.

President Maithripala Sirisena has issued a statement calling for people to remain calm and support the authorities in their investigations and Prime Minister Ranil Wickremesinghe is chairing an emergency meeting.

He said: “I strongly condemn the cowardly attacks on our people today. I call upon all Sri Lankans during this tragic time to remain united and strong.”

Announcing the curfew, Defence Minister Ruwan Wijewardane said: “We will take all necessary action against any extremist group that is operating in our country.” He also said that “all the culprits” had been identified and would be “taken into custody as soon as possible.”

Another minister, Harsha de Silva, described “horrible scenes” at St Anthony’s Shrine in Kochchikade, saying he had seen “many body parts strewn all over.”

Pope Francis, in his traditional Urbi et Orbi speech at the Vatican, condemned the attacks as “such cruel violence” which had targeted Christians celebrating Easter.

Cardinal Archbishop of Colombo, Malcolm Ranjith, told the BBC: “It’s a very difficult and a very sad situation for all of us because we never expected such a thing to happen and especially on Easter Sunday.”

UK PM Theresa May tweeted condolences, saying the “acts of violence against churches and hotels in Sri Lanka are truly appalling,” and US President Donald Trump tweeted “heartfelt condolences” for the “horrible terrorist attacks.”

The BBC said that in the years since the end of Sri Lanka’s civil war in 2009, there has been some sporadic violence, with members of the majority Buddhist Sinhala community attacking mosques and Muslim-owned properties. That led to a state of emergency being declared in March 2018.

The civil war ended with the defeat of the Tamil Tigers, who had fought for 26 years for an independent homeland for the minority ethnic Tamils. The war is thought to have killed between 70,000 and 80,000 people.

Theravada Buddhism is Sri Lanka’s biggest religion, making up about 70.2% of the population, according to the most recent census. It is the religion of Sri Lanka’s Sinhalese majority. It is given primary place in the country’s laws and is singled out in the constitution.

Hindus and Muslims make up 12.6% and 9.7% of the population respectively and Sri Lanka is also home to about 1.5 million Christians, according to the 2012 census, the vast majority of them Roman Catholic.

International Christian Concern (ICC) said at least 189 people have been killed in the series of bombings targeting 3 churches and 4 hotels across Sri Lanka.

ICC said that according to reports, as many as 400 others have been hospitalized with injuries as a result of the bombings that mark the first major terrorist attack since the country’s civil war came to a close in 2009.

Six bombings took place around the same time at 8:45 a.m. in the morning as Easter services began across the country. The deadliest attack took place at St. Sebastian’s Church, a Catholic church in Negombo, about 20 miles north of the country’s capital city of Colombo. In that attack more than 60 worshipers were killed.

ICC said that in other attacks on churches, St. Anthony’s Shire, a Catholic shrine in Colombo, and Zion Church, an evangelical church in Batticoloa, were also bombed. In those attacks, at least 52 were killed at St. Anthony’s and another 38 killed at Zion Church.

Three hotels popular with foreign tourists in Colombo were also bombed, including Shangri-La Colombo, Kingsbury Hotel in Colombo and the Cinnamon Grand Colombo. According to various media reports, it remained unclear whether there were any casualties in the hotels.

ICC said that so far, no one has taken responsibility for the attacks on the churches and hotels. However, Sri Lankan police say the attacks were highly coordinated and early investigations suggest that they were carried out by suicide bombers.

Out of Sri Lanka’s total population of 22 million, Christians only account for 7.6% according to the 2012 census.

Christians in Sri Lanka have claimed to be facing increasing intimidation from Buddhist extremists in recent years. According to the National Christian Evangelical Alliance of Sri Lanka (NCEASL), which represents more than 200 churches and other Christians groups in Sri Lanka, there were 86 verified incidents of persecution in 2018. This included incidents of discrimination, threats, and violence against Christians.

In 2019, NCEASL has already recorded 26 verified incidents of persecution. This includes incidents as recent as a mob attack on a Methodist Prayer Center on Palm Sunday. In that incident, ICC reported that 25 young people pelted Christian worshipers with stones and firecrackers before locking the Christians within the prayer center and refusing to release them.

ICC’s Regional Manager, William Stark, said, “The thoughts and prayers of ICC first and foremost go out to the families of those killed and injured in this deadly wave of attacks. No one should fear being the target of such extreme violence simply because of their identity as a religious minority. Too often Sri Lanka’s authorities have tolerated instances of discrimination and intolerance against Christians and other religious minorities. This must come to an end. Authorities must investigate who was behind these deadly attacks and bring them to justice.”

The death toll [at 8am] was 137 and rising, with hundreds more injured. Two churches have been named as St Anthony’s Shrine and St Sebastian’s.

“We’re shocked and appalled and our prayers go out for our brothers and sisters in Sri Lanka,” said Paul Robinson, the CEO of Release International, which supports persecuted Christians around the world. “The scale of this horror takes our breath away. All-too often Easter becomes the focus for violence against Christians.

“Christians in many countries are on high alert for attacks timed to disrupt the most joyful service of the year – Easter Sunday. But terrorism can never overcome the central truth of the Gospel – Christ is risen. Please pray for our brothers and sisters in Sri Lanka and wherever Christians face violence around the world.”

Release International also said that no group has claimed responsibility yet for the attacks. The Prime Minister is chairing an emergency meeting. Easter Sunday evening church services have been cancelled along with all leave for police and security personnel, according to reports.

Around 2 million Christians live in the Buddhist-majority nation where Christians from Bhuddist and Hindu backgrounds face discrimination for their faith and the growth of evangelical Christianity in Sri Lanka since 1980 has met with violent opposition from Buddhist extremists. Persecution has intensified since 2012, coinciding with a rise in Buddhist nationalism.

Release International said militants have burned churches and attacked Christians. Threats and intimidation are rife. In many cases, violent mobs have been led by Buddhist monks.

Christians say local government officials and police do little to prevent the attacks – and are sometimes complicit in them and anti-Christian violence has abated somewhat since 2015, when President Maithripala Sirisena came to power, pledging to uphold religious freedoms guaranteed in the constitution.

In 2008, according to Release International, a government circular was issued requiring places of worship to be ‘registered,’ despite there being no legal means to do so. Many ‘unregistered’ churches have been forced to close. That circular has been used to limit religious freedom and intimidate pastors.

Buddhist nationalists have attempted to pass anti-conversion laws in Sri Lanka that would criminalise some forms of evangelism. After the law was rejected, there were moves to change the constitution to make Buddhism the official religion and to outlaw attempts to convert Buddhists. It was defeated at the Supreme Court. Further moves to ban conversions were proposed in 2011.

UK-based Release International has been supporting Christians whose churches have been attacked and forced to close. But attacks on this scale are unprecedented in Sri Lanka.

Through its international network of missions Release International is active in more than 30 countries around the world, supporting pastors, Christian prisoners and their families; supplying Christian literature and Bibles; and working for justice.