Top Posts
Colorado football coach Sanders’ unabashed faith
There’s A Light That Enters Houses With No...
Knowing the One Who Always Keeps His Word
Pregnancy Resource Centers Fight For Life Amidst Opposition
This World is Not Our Home
Lessons Learned From a Gingerbread House
Let There Be Peace on Earth
‘I Wanna Dance’ movie: Whitney Houston’s success and...
Fact Finding, Sight Seeing, and Prayer Walking
Kidney donation led to 8 life-saving surgeries
Home Tags Posts tagged with "Ethiopian Christians"

ADDIS ABABA, ETHIOPIA (ANS) — An evangelical church in central Ethiopia has been ordered to vacate its building, 10 years after it started meeting there, and churches elsewhere in the region say pressure is increasing on them, too.

According to World Watch Monitor, the Mekane Yesus Evangelical Church in the town of Robe in Bale zone, about 400km southeast of the capital Addis Ababa, was ordered by the Oromia Regional State Authorities to leave its premises within 30 days. Church meetings with local officials so far have not changed their mind. 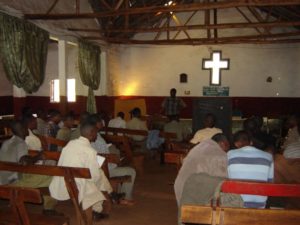 The eviction letter, dated May 15 and signed by the mayor, Birhanu Dadi Tafesse, said the church’s neighbours had complained of noise. They claimed the Christians attending the meeting were not from the area, and that the building was not suitable for worship services. “Based on the consensus we have reached in the committee formed, you have to look for another place and leave the current place within 30 days,” the letter said.

“This is really a surprising move,” a source, unnamed for security reasons, told World Watch Monitor. “If noise is the problem, Protestant churches cannot be the first to be accused of sound pollution. Other religious institutions use much more powerful sound systems all over the country. Noise from mosques and Ethiopian Orthodox churches can be heard throughout the day and even at night. This decision is nothing other than a display of animosity towards Protestant churches in the region.”

The source said the congregation secured the building from a private owner 10 years ago, and had been using it without incident.

There is concern that these measures are part of a concerted effort to discourage Christian activity in Oromia state, the birthplace of President Abiye Ahmed. Leaders say they also fear that if these government actions are successful, it might encourage Muslims in other communities in Oromia to initiate similar complaints. As of the 2007 census, the state was about 51 percent Christian (17.7% protestant, 30.4 orthodox) and 47.6% Muslim.

There have been tensions in the region before. In June last year, 20 Christians were killed in the city of Goba. Although some observers blamed sympathisers of the Tigray People’s Liberation Front, an armed liberation movement, a local source said it took place after Christians opposed the installation of a monument for a prominent Muslim leader in the area. And some locals pinned the blame on the government, saying it was warning Christians against opposing similar moves in future.

“Similar tensions are bubbling under the surface in other parts of Oromia,” the source said. “We have even heard of places where Muslims had asked Christians to vacate the area. And though this call is veiled as ethnic rivalry by some media and observers, it is at its very core a religious matter.”

It’s not only the state’s Protestant churches that face problems. Some Ethiopian Orthodox churches have reported an increase in difficulties, World Watch Monitor was told. In Woliso, 120km southwest of Addis Ababa, authorities are reported to have confiscated church land and handed it to followers of the increasingly powerful Wakefeta African Traditional Religion.

Ethiopia law promises freedom of religion, but the country is 28th on the Open Doors’ 2019 World Watch List of countries where it is most difficult to live as a Christian.

Protestant communities in the country face challenges from fanatical elements in the Ethiopian Orthodox Church, and, where ethnicity and Islam are interconnected, Christians can experience hostility from family and community.