Top Posts
Pregnancy Resource Centers Fight For Life Amidst Opposition
This World is Not Our Home
Lessons Learned From a Gingerbread House
Let There Be Peace on Earth
‘I Wanna Dance’ movie: Whitney Houston’s success and...
Fact Finding, Sight Seeing, and Prayer Walking
Kidney donation led to 8 life-saving surgeries
The Power of Curiosity
When Love Came Down at Christmas
A Walk of Faith Begins with a Step...
Home Tags Posts tagged with "Ethnic Cleansing"

BANGKOK, THAILAND (ANS) –Two journalists who reported on the massacre of Rohingya Muslims during a campaign of ethnic cleansing have been released from prison is a mass pardon by Burma’s president. 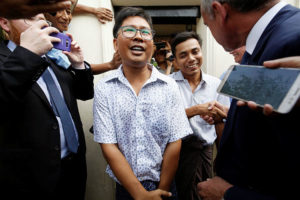 Reuters reporters Wa Lone and Kyaw Soe Oo react as they are freed from Insein prison after receiving a presidential pardon in Yangon, REUTERS/Ann Wang.

Reuters’ journalists Wa Lone and Kyaw Soe Oo were released today from a Yangon prison in Myanmar as part of a presidential pardon, after spending more than 500 days behind bars, Reuters reported. The journalists were released in a mass amnesty of prisoners granted today by President Win Myint, according to reports.

Since August 25, 2018, Burmese security forces have been carrying out a campaign of ethnic cleansing against Rohingya Muslims in Rakhine State.

Over half a million Rohingya have fled to neighboring Bangladesh to escape killings, arson, and other mass atrocities. The Rohingya, effectively denied citizenship under Burmese law, have faced decades of repression and discrimination. About 120,000 remain internally displaced from waves of violence in 2012 and 2016, in dire humanitarian conditions. Human Rights Watch researchers are reporting from the field on the crisis and its global impact.

“Committee to Protect Journalists (CPJ) is deeply relieved that Reuters journalists Wa Lone and Kyaw Soe Oo have finally been freed, and reiterates that Myanmar should never have charged and jailed them in the first place,” said CPJ Senior Southeast Asia Representative Shawn Crispin. “May their release herald a new era of press freedom in Myanmar, where reporters no longer fear reprisal merely for doing their jobs.”

The journalists were arrested in December 2017 and sentenced to seven years in prison in September 2018 under Myanmar’s colonial-era Official Secrets Act, according to CPJ research. In April, Myanmar’s Supreme Court rejected a final appeal of Wa Lone and Kyaw Soe Oo’s convictions, CPJ documented. The reporters insisted throughout legal proceedings that they had not committed any crime.

Wa Lone and Kyaw Soe Oo were investigating a massacre of Rohingya men and boys by Myanmar security forces in Rakhine state; their reporting was subsequently published by Reuters in February 2018 and led to seven soldiers being sentenced to prison for their involvement in the killings, according to reports. They were awarded a Pulitzer Prize for their reporting this year.

Christian Solidarity Worldwide (CSW) also welcomed the news that Reuters journalists Wa Lone and Kyaw Soe Oo were among 6,520 released from prison in Burma in a mass amnesty today, May 7.

In December 2017 the two journalists were arrested and in September 2018 they were sentenced to seven years in prison after exposing the 2017 massacre by the Burma Army and Rakhine Buddhist villagers of ten Rohingya men in Rakhine State, Burma. They were charged with violating the country’s Official Secrets Act.

Their release comes less than a month after Burma’s Supreme Court rejected an appeal against their sentence on April 23. The journalists had spent over 16 months in prison, during which they were awarded the Pulitzer Prize for their work.

CSW’s East Asia Team Leader Benedict Rogers said: “CSW welcomes the release of Wa Lone and Kyaw Soe Oo and applauds the President and the authorities in Burma for including them in the latest amnesty. The journalists have faced a grave miscarriage of justice; they should never have been jailed, and should have been released much earlier, but their release now is welcome.

“We call on the Burmese authorities to work now to enhance and protect press freedom and ensure that such injustices against journalists in the country are not repeated.”