Top Posts
There’s A Light That Enters Houses With No...
Knowing the One Who Always Keeps His Word
Pregnancy Resource Centers Fight For Life Amidst Opposition
This World is Not Our Home
Lessons Learned From a Gingerbread House
Let There Be Peace on Earth
‘I Wanna Dance’ movie: Whitney Houston’s success and...
Fact Finding, Sight Seeing, and Prayer Walking
Kidney donation led to 8 life-saving surgeries
The Power of Curiosity
Home Tags Posts tagged with "Evangelical Church of Vietnam (South)"

HO CHI MINH CITY, Vietnam. (ANS) – The government of Vietnam has denied the Evangelical Church of Vietnam (South) permission to hold its scheduled bi-annual Clergy Assembly, according to the Bureau of Religious Affairs. 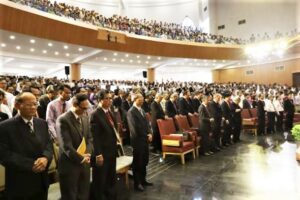 Congress of the Evangelical Church of Vietnam(S) in 2018 in Ho Chi Minh City, Vietnam. (ECVN(S) photo)

After the ECVN(S) announced on Nov. 25 that it was “postponing” the assembly scheduled for Feb. 1-3, 2021 because the government had denied permission, the Bureau of Religious Affairs released a statement the same day confirming its decision and urging the ECVN(S) to meet requirements of Vietnamese law in order to hold the assembly.

Sources told Morning Star News www.morningstarnews.org   the government denial is based on the ECVN(S)’s refusal to comply with Article 34 of the 2018 Law on Religion, which requires a national religious body to submit names of its candidates for leadership for government approval in advance of the meeting at which their election would take place.

Besides finding it repugnant that an atheistic government would claim the right to decide who is fit to become a church leader, the ECVN(S) argues that Article 34 is contrary to its government-approved 2001 constitution and contrary to a century of practice. The church body unanimously passed a “line-in-the-sand” motion at its 2017 General Assembly that it could not and would not comply with Article 34.

The ECVN(S) had complained that Article 34 was inserted after the last publicly circulated draft of the Law on Religion that went into effect Jan. 1, 2018. During the period for public review before the National Assembly passed the law, Vietnam’s religious leaders, international human rights observers and advocates, as well the UN Special Rapporteur for Freedom of Religion and Belief, had sounded alarms that the law was highly defective and urged Vietnam to amend it.

Morning Star News reported that besides allowing a government veto of the church’s nominations of its own officers, Article 34 requirements would be impossible to meet from a practical point of view, church leaders said. The democratic nature of the ECVN(S) constitution allows for nominations from the floor at the voting assembly, and thus it would be impossible to submit names of candidates for church leadership in advance of the assembly.

The Clergy Assembly itself was a novel development in the ECVN(S) 2001 constitution required by the government. Until then, the church had functioned well with a periodic General Assembly. At that time the government had tried to install some leaders under its influence as the first officers of the essentially redundant Clergy Assembly in an apparent attempt to set up competing leaders within the church.

That church-state confrontation portended what many stakeholders warned would happen – a 2018 Law on Religion designed to provide the authorities with more tools to interfere in and control religion, rather than provide more freedom.     The ECVN(S) announcement, signed by its President Thai Phuoc Truong and General Secretary Phan Quang Thieu, stated that even if government permission were immediately forthcoming, it was now too late to plan the large event.