Top Posts
Colorado football coach Sanders’ unabashed faith
There’s A Light That Enters Houses With No...
Knowing the One Who Always Keeps His Word
Pregnancy Resource Centers Fight For Life Amidst Opposition
This World is Not Our Home
Lessons Learned From a Gingerbread House
Let There Be Peace on Earth
‘I Wanna Dance’ movie: Whitney Houston’s success and...
Fact Finding, Sight Seeing, and Prayer Walking
Kidney donation led to 8 life-saving surgeries
Home Tags Posts tagged with "Evangelical Fellowship of India"

NEW DELHI, INDIA (ANS) — Morning Star News reports an attorney representing Christians threatened at a wedding in northern India – with police joining in the verbal abuse and then arresting the Christians – couldn’t believe what was now happening to him.

According to Morning Star News, Attorney Harjinder Singh had gone to the workplace of the Sikh leader who organized the disruption of the wedding in Sri Ganganagar, Rajasthan state – by 250 intruders armed with rods and sticks – to see if he could persuade him to drop charges against the Christians. The accused pastor and music team at the wedding had been falsely accused of disturbing the peace and fraudulent conversion. 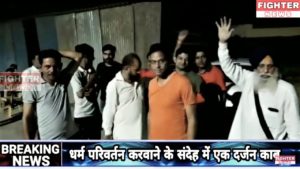 Screenshot of media coverage of mob

The attorney showed up at the medical clinic of the Sikh leader, Dr. Gurmeet Singh, on June 29. Gurmeet Singh is chairman of the local Shiromani Gurdwara Parbandhak Committee (SGPC), a Sikh body.

“The moment I introduced myself, Dr. Gurmeet punched me, landing several blows on my face, and asked me to ‘get out’ of the place,” attorney Singh said. “As I left, I was surrounded by Dr. Gurmeet’s men outside the clinic.”

The mob outside, members of the Hindu extremist Rashtriya Swayamsevak Sangh (RSS), surrounded the attorney and began to argue with him. Shouting to each other to throw him to the ground, some were saying, “Let’s kill him,” the attorney said.

Leading the mob was Surendra Godara, a former schoolmate of attorney Singh, he said.

“Godara, my schoolmate, told me that he is the one who has registered the complaint against the Christians, and he is very angry at me for changing my faith from Sikhism to following Jesus Christ,” the attorney said.

He managed to escape with torn clothes and immediately reported the attack to the Raisinghnagar police station.

“Though a written statement was taken from me by the police, no case was registered,” attorney Singh said. “But the next morning, news in the local newspaper left me shocked, saying that a case had been booked against me by Dr. Gurmeet Singh in the same police station, and the police had registered his complaint.”

He called police and was told that an investigation based on his complaint was underway, and that if they found any wrongdoing by Gurmeet Singh and the mob led by Godara, action against them would be taken.

One month later, he told Morning Star News, “No action has been taken by the police against Dr. Gurmeet or Godara.”

The attorney is charged with house trespass, intentional insult to provoke and unlawful assembly under the Indian Penal Code, though he said police have yet to approach him.

In the slums near the Raisinghnagar bus station in Sri Ganganagar, a pastor who goes by the single name of Pankaj was delivering the sermon at the late-night wedding when the 250 men armed with rods and wooden sticks arrived. They began cursing the guests and telling them to leave, sources said.

“I had just started to speak when a mob led by one Gurmeet Singh barged into the ceremony and began to spitefully speak to us,” Pastor Pankaj said. “They were about 250 people, and every single one was carrying a rod or a wooden stick. It was evident that they were there to attack us.”

Morning Star News reported the visiting musicians and pastor slipped away from the hall, with some of them seeking cover in a room they had used to freshen up upon their arrival from various places in Punjab, Haryana and Rajasthan states.

“Soon we heard the agitated mob hurling curses and entering the marriage palace hall while we stayed in our room,” Pastor Pankaj told Morning Star News. “They shouted at all the guests in the private party and shooed them away. The mob walked towards our room and knocked at our door, hurling abuses at us and calling us names. We opened the door and they barged in with sticks.”

Gurmeet Singh, whom the pastor estimated to be about 70 years old, burst in with 15 to 20 others hurling obscenities and accusing them of forcibly converting poor people in the slum area, he said.

“Gurmeet Singh not only spoke vulgar words to us, but he also cursed Jesus and spoke disrespectfully about Jesus,” the pastor said.

One intruder attempted to manhandle a Christian woman, who jerked his hand away and warned him, Pastor Pankaj said.

He said he feared the mob would kill them.

“I quickly prayed, ‘Lord, I can see my death right in front of me – I pray that you would take me to be with You,” he said.

Morning Star News said the intruders had called news media, who took video of the scene that was broadcast on several news channels the following day, along with interviews with the assailants. Gurmeet Singh told reporters that the Christians were offering money to fraudulently convert poor people, a charge that Pastor Pankaj roundly denies.

When police arrived at the wedding site, they joined the mob and, using coarse language, accused the Christians of fraudulent conversion.

“Then one of the policemen asked the attackers to allow the police to take us to the police station, where [the officer said] we would be beaten up and straightened,” Pastor Pankaj told Morning Star News.

Detained in a tiny, overcrowded, filth-spattered cell in Raisinghnagar, the Christian men received no food until the afternoon of the next day, Pastor Pankaj said.

The five men were put into a 4-foot by 6-foot cell with no ventilation or light along with three prisoners already jailed there. As the wedding had been disrupted before dinner could be served, they spent the entire night sleepless and hungry, he said.

“There was filth everywhere,” Pastor Pankaj told Morning Star News. “The walls and corners were spit on all over. We could not breathe and felt suffocated with eight people in such a small room.”

The five women Christians and child were locked up in a cell that was equally filthy, according to the pastor.

The names of the five detained women and 3-year-old girl are withheld for security reasons.

“After the police shift changed in the middle of the night, a woman constable saw my child constantly crying and restless,” the mother of the child told Morning Star News. “She asked me if I had food or fed the child. She called for food from the market and gave me something to eat.”

Gurmeet Singh produced a couple before police alleging that the Christians offered them 100,000 rupees (about US$1,450) in order to lure them into converting.

“Along with accusing us of being involved in [fraudulent] conversion, they also accused us of tearing the holy book of Sikhism – the Guru Granth [Sahib],” Pastor Pankaj said. “The police pressured us to accept our guilt to the extent that they beat up one of the Christians arrested in order to make him confess.”

The arrested Christians told Morning Star News that police did not record their statements, and rather than questioning them ordered them to confess.

As news of the arrests began to spread on social media, several Christian leaders and rights activists began calling police officials to ask why they were in custody.

Those arrested were not released until the late afternoon of June 29. Contacted that day, Station Head Officer Kishan Singh confirmed the arrests of five men and five women but told Morning Star News, “We have let the child go.” But attorney Singh, who posted bail for the Christians, said the small child was in custody the entire time with this mother.

The police official confirmed that they were charged with disrupting the peace under Section 151 of the Code of Criminal Procedure. They had been taken to the Raisinghnagar police station based on complaints by Godara of the Hindu extremist RSS and Gurmeet Singh, head of the local Sikh body, the SGPC.

The Rev. Vijayesh Lal, general secretary of the Evangelical Fellowship of India, told Morning Star News that he contacted Superintendent of Police Hemant Sharma, and the higher official said he was not aware of the arrests.

“He assured that he will personally look into the matter, and he did call up the local police station and inquired about the Christians,” Lal said. “For that we are grateful. Although it is sad that under pressure from local Hindutva [Hindu nationalist] organizations, the Christians were harassed, while no action was taken against the attackers.”

Hindu nationalist leaders on June 29 led a mob in protest against the Christians and appealed to the district collector to imprison the Christians for at least six months.

Attorney Singh said that after the 10 suspects along with the child were released on bail, officials told them to immediately leave the city to help calm tensions. As they were arrested without a warrant under Section 151 of the Code of Criminal Procedure for disturbing the peace, release on bail meant there would be no further prosecution.

“After we were let out on bail, the agitated mob surrounded the police station and shouted slogans against the police for letting us out,” Pastor Pankaj said. “The news was broadcast by various local news channels, and after we reached our respective homes, I saw on TV that the police denied that any conversion activity took place.”

Morning Start News said outcry from organizations and individuals made aware of the arrests resulted in all charges against them being dropped. Pastor Pankaj said he was thankful for those who raised awareness of the case, including local pastor Barish Masih.

“We are so glad that in both states’ police [Rajasthan and Punjab], especially Rajasthan, the higher officials intervened and made sure that the constitution is still alive,” he said. “They did not encourage extremism and allowed justice to prevail.”

Andreas Thonhauser, director of external relations at ADF International, noted that public awareness is essential to obtain justice for Christians in India.

“Ultimately, public awareness is key,” he wrote in a recent issue of the Catholic Herald. “In one of his first addresses after winning the elections, [Prime Minister Narendra] Modi said that minorities should overcome their ‘imaginary fears.’”

India is ranked 10th on Christian support organization Open Doors’ 2019 World Watch List of the countries where it is most difficult to be a Christian. The country was 31st in 2013 but its position has been worse each year since Modi of the Bharatiya Janata Party came to power in 2014.

The author of this story, Michael Ireland, is a self-supported media missionary with ANS. Click here to support him as a missionary journalist.
August 2, 2019
FacebookTwitterPinterestEmail