Top Posts
Pregnancy Resource Centers Fight For Life Amidst Opposition
This World is Not Our Home
Lessons Learned From a Gingerbread House
Let There Be Peace on Earth
‘I Wanna Dance’ movie: Whitney Houston’s success and...
Fact Finding, Sight Seeing, and Prayer Walking
Kidney donation led to 8 life-saving surgeries
The Power of Curiosity
When Love Came Down at Christmas
A Walk of Faith Begins with a Step...
Home Tags Posts tagged with "Faith Leaders" 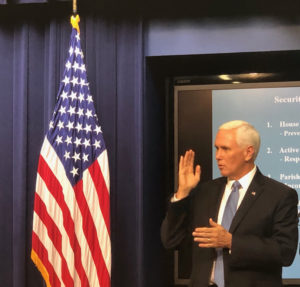 CEN President Mary Marr has been tasked by the Acting Secretary, along with ten other national faith leaders, to provide recommendations to the DHS Homeland Security Advisory Committee in October on how DHS and the faith community may strengthen timely and actionable two-way information sharing, joint training, incident prevention and mitigation, and increase critical faith-based resources.

Marr stated: “After conducting site visits, where the faith community has been targeted such as the Louisiana churches which were burned to the ground, and examining the statistics of vandalism or violent assaults against houses of worship, CEN strongly endorses the new DHS strategy which focuses upon recognizing and reporting violent behavioral indicators. Violence against people of any faith holds no place in a civil society. Inflammatory labels against people of faith and unrestrained rhetoric in our secular and social media landscape today are threatening the Church as never before. Critical protection steps need to be taken now by church leadership before congregants are hesitant to assemble as Scripture commands. Having a church security plan with teams who are trained and practice, is essential for anyone tasked with protecting churches and ministries.”

Marr said, “The DHS Secretary tasked the DHS HSAC Subcommittee to: Evaluate the adverse impacts that violent extremists and domestic terrorists are having on the faith community. What more can be done by the Department to prevent these attacks and increase community resistance to mobilization to violence? What are the best practices and lessons learned for consideration? I would add the Church needs to ask itself: What is our responsibility in security apart from local law enforcement? Are we addressing what is needed timely such as having security plans and trained teams in place along with suspicious behavior identification protocols at minimum?”

CEN provides resources to assist you, your family, your church and your Christian community to be ready to respond to any crisis large or small, such as ReadyChristian, ReadyChurch, ReadyCity, CEN Advisors, Church Safety Security 101, Suspicious Activity Pre-indicators, and Federal Resources and Assistance.

“If You See Something, Say Something!”

Christians are reminded to call local law enforcement or 911 to report any constitutionally unprotected suspicious activity such as those who are:

Learn how you can become a CEN volunteer https://tinyurl.com/y53w8jgz

CEN is an All-Volunteer ministry of the Widow’s Mite Foundation 501c3.

The author of this story, Michael Ireland, is a self-supported media missionary with ANS. Click here to support him as a missionary journalist