Top Posts
Colorado football coach Sanders’ unabashed faith
There’s A Light That Enters Houses With No...
Knowing the One Who Always Keeps His Word
Pregnancy Resource Centers Fight For Life Amidst Opposition
This World is Not Our Home
Lessons Learned From a Gingerbread House
Let There Be Peace on Earth
‘I Wanna Dance’ movie: Whitney Houston’s success and...
Fact Finding, Sight Seeing, and Prayer Walking
Kidney donation led to 8 life-saving surgeries
Home Tags Posts tagged with "Flower Pentecostal Heritage Center"

SPRINGFIELD, MO (ANS – Oct.19, 2018) — Franklin Hall was a prominent member of a generation of Pentecostal healing evangelists, few of whom remain alive today.

Franklin Hall (1909-1994), best-known for his emphasis on prayer and fasting, had roots in the Assemblies of God, and his later worldwide ministry made an impact on the broader Pentecostal and charismatic movements.

The Franklin Hall Collection, which provides valuable insight into segments of the Pentecostal movement that have not been sufficiently documented, will be a boon to researchers. 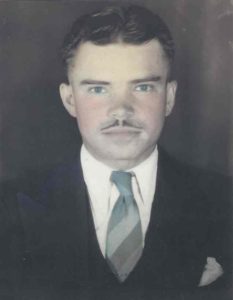 Franklin was born in 1909 in the mid-western town of Coffeyville, Kansas, the first of six children, to Carey F. Hall and Alice M. Hall. He was Methodist Episcopal from birth. At age 12, deeply distraught that his father passed away, and with many business responsibilities that he took on to help his mother and siblings, he sought a deeper experience with the Holy Spirit. He received permission from his mother to attend the newly-formed Pentecostal church in Coffeyville, founded by Francis L. Doyle. Franklin’s mother and siblings eventually joined him and also began attending the Pentecostal church.

Doyle was a widower, and he married Franklin’s mother, Alice. They became ministry partners. Under Doyle’s leadership, the congregation voted to join the Assemblies of God. Doyle ultimately transferred his ordination to the Pentecostal Church of God, which also ordained Alice.

In the 1940s, Franklin moved his ministerial headquarters to San Diego. In 1946, Franklin founded Miracle Temple, where he established the Fasting and Prayer Daily Revival Center with the help of Burroughs Waltrip (Kathryn Kuhlman’s husband), Stanley Comstock, Earl Ivy, Tommy Baird, Myrtle Page, and Franklin’s brothers, Harold, Virgil, and Delbert. Delbert and his wife Florence were co-pastors. Franklin’s sister, Burnena Van Horn, assisted with music, and his other sister, Verna Linzey, occasionally spoke. Under his leadership, assisted by Jack Walker, the teaching of fasting as a means of bringing about revival and the restoration of the Church spread throughout the Pentecostal world.

In 1946 Franklin and his wife, Helen, sold some assets and borrowed against their home to finance the printing of millions of pieces of literature to send to people all over the world. His best-known book, Atomic Power with God by Fasting and Prayer, was widely circulated in Pentecostal circles. 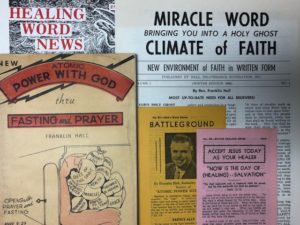 A few of the publications written by Franklin Hall

Believers from many denominations came to Miracle Temple to hear Franklin’s teaching concerning prayer and fasting. Many went on consecration fasts of only water, some for twenty to more than sixty days. They prayed for worldwide revival. They wanted to see salvation and healing, and the restoration of the gifts of the Spirit.

It is reported that one thousand people received Jesus Christ as Lord and Saviour during the first year at Miracle Temple. Most were military men from across America stationed in San Diego. They carried the message of the Gospel around the world in their travels with the U.S. Navy. One sailor who did office work for Franklin Hall, and whom Franklin mentored, was Stanford Linzey. He married Franklin’s sister, Verna, and went on to become the first active duty Assemblies of God Navy chaplain.

Franklin conducted crusades throughout the United States, the United Kingdom, and West Africa. His crusades attracted large crowds and he had a significant worldwide following. 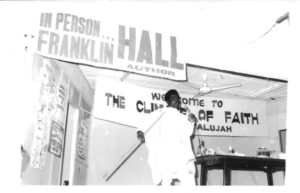 Signs go up for a Franklin Hall healing crusade

In 1956 Franklin moved his headquarters to Phoenix, Arizona, where he founded the Hall Deliverance Foundation, and later built the International Healing Cathedral. In 1970 Hall’s ministry included thirty-two affiliated churches and two thousand members. After publishing Healing Word News with great success, he began publishing Miracle Word Magazine in 1965, which eventually reached a peak circulation of 24,000.

Scholars are increasingly interested in evangelists, including Hall, who helped lay the foundation for Pentecostalism’s significant growth worldwide. One such scholar, Matthews A. Ojo, documented Franklin Hall’s influence in Africa, which until recent has received very little scholarly attention. Ojo’s book, The End-Time Army (Africa World Press, 2006), documented Franklin Hall’s contribution to charismatic student movements in Nigeria in the 1970s.

Another scholar, Laura Premack, Lecturer in Global Religion & Politics at Lancaster University in England, has built upon Ojo’s research, finding that Franklin Hall had influence in Nigeria as early as the 1940s. In a recent article, “Prophets, Evangelists, and Missionaries: Trans-Atlantic Interactions in the Emergence of Nigerian Pentecostalism” (Journal of Religion, 2015), she reported, “Hall published prolifically from the 1940s through the 1970s, and a primary focus of his ministry was to print and ship his newsletters, books, and pamphlets around the world. They circulated in the United States and West Africa, influencing both American healing evangelists and Nigerian Christians.”

When Premack was informed that Franklin Hall’s archival collection was deposited at the Flower Pentecostal Heritage Center, she responded, “It’s fantastic that the FPHC is archiving this collection! There is currently no straightforward way to access sources on Franklin Hall, who deserves a lot more scholarly attention than he’s received.”

Now, with the Franklin Hall Collection accessible at the Flower Pentecostal Heritage Center, it will be easier than ever to study the life, ministry, and worldwide impact of this fascinating evangelist who encouraged Christians to pray, fast, and believe God for great things.

Do you have Pentecostal historical materials that should be preserved? Please consider depositing these materials at the Flower Pentecostal Heritage Center (FPHC). The FPHC, located in the Assemblies of God national offices, is the largest Pentecostal archives and research center in the world. We would like to preserve and make your treasures accessible to those who write the history books.