Top Posts
Knowing the One Who Always Keeps His Word
Pregnancy Resource Centers Fight For Life Amidst Opposition
This World is Not Our Home
Lessons Learned From a Gingerbread House
Let There Be Peace on Earth
‘I Wanna Dance’ movie: Whitney Houston’s success and...
Fact Finding, Sight Seeing, and Prayer Walking
Kidney donation led to 8 life-saving surgeries
The Power of Curiosity
When Love Came Down at Christmas
Home Tags Posts tagged with "God’s Not Dead: Bible Gains Major Real Estate in Hollywood… Again" 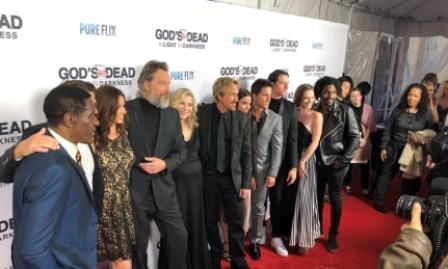 Cast of God’s Not Dead: A Light in Darkness at Hollywood premier Tuesday, March 20, 2018

HOLLYWOOD, CA – God’s Not Dead: A Light in the Darkness is proof, just as the first movie in the series was, that it is another season that the Bible gains major real estate in Hollywood.

I Can Only Imagine opened last weekend, Paul, Apostle of Christ opens this coming weekend, and God’s Not Dead (3) opens Easter weekend. 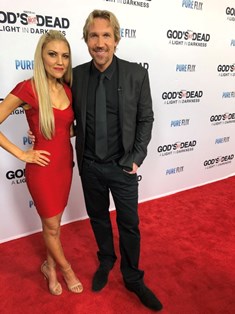 “We saw this in 2014,” said David A.R. White, God’s Not Dead leading actor and Pure Flix Entertainment founding partner. “There were three faith-based movies that really hit it and that was with God’s Not Dead, Heaven is For Real and Son of God. All of a sudden we had these movies come out and it was ‘The Year of the Bible’ as they called it. There was a trifecta so to speak.”

White was at the Los Angeles premiere of God’s Not Dead: A Light in Darkness at the Egyptian Theater in Hollywood Tuesday evening, just a couple days after the highly successful opening of I Can Only Imagine. The Roadside Attractions-Lionsgate’s movie “crushed early box office forecasts with a surprisingly strong $17.1 million at 1,629 locations in North America,” Variety reported.

“Obviously, we can only be thrilled for ‘I Can Only Imagine,’ the Erwins (co-directors), and Kevin Downes (producer),” White said.

When asked about what the current faith-based film trifecta and God’s Not Dead coming so shortly after the box office smash means, White didn’t attempt any red-carpet prophecy.

“Whether or not it happens again we really don’t know. We don’t control that,” he said. 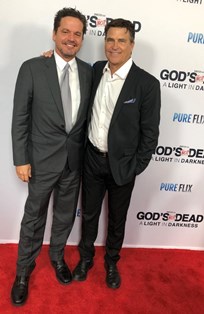 When asked the same question, I Can Only Imagine Producer Kevin Downes said it’s a win-win situation for the faith-based film industry.

“I think it’s a jolt of energy. At the end of the day, we all root for each other,” Downes said. “The LA Times came out with an article recently ‘wondering’ if Christian films were in a slump, but guess what, God showed up, and the audience showed up, and the numbers are huge.”

He added, “Whether it’s my film or someone else’s film, it’s just energizing. We are alive and well. Jesus is alive and well, and it’s a great time to be making films.” 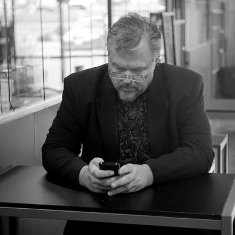 About the writer: Alex Murashko (http://alexmurashko.com/) is currently working with One Ten Pictures as the media organization’s Story Producer, developing and working on projects that include stories about people who make a positive difference in this world. He previously was a Church & Ministry Editor/Reporter for The Christian Post. He also worked at the Los Angeles Times Orange County Edition and at the Press Enterprise in its Southwest Riverside County bureau. Current projects include Together LA, a movement focused on loving on Los Angeles. Murashko lives in Southern California and enjoys serving within life recovery and homeless ministries. Los Angeles has a special place in his heart… as well as tacos and salsa!