Top Posts
There’s A Light That Enters Houses With No...
Knowing the One Who Always Keeps His Word
Pregnancy Resource Centers Fight For Life Amidst Opposition
This World is Not Our Home
Lessons Learned From a Gingerbread House
Let There Be Peace on Earth
‘I Wanna Dance’ movie: Whitney Houston’s success and...
Fact Finding, Sight Seeing, and Prayer Walking
Kidney donation led to 8 life-saving surgeries
The Power of Curiosity
Home Tags Posts tagged with "Good News"

The world population at the end of September 2022 – an estimated 7.98 billion people – included 2.5 billion Christians. The remaining 5.48 billion people, sadly, have never heard the Gospel, or they’ve rejected Jesus as Savior and Lord.

Equally tragic, every three seconds only two of the six people who die are saved by trusting in Jesus.

Can anybody reach lost souls before it’s too late?

Motivated by a passionate relationship with Jesus that’s grown over four decades, one evangelist is laboring to bring in the harvest one soul at a time, and he believes everybody can and should share the good news of Jesus with lost people. 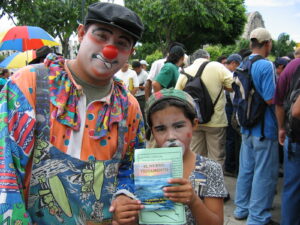 Clowns for Jesus in El Salvador.

A street preacher from the time he was saved, Bob Gabelman has shared the good news of Jesus 20,000 times and taught 70 conferences on soul-winning since 1996. A full-time missionary and teacher intent on raising up fellow laborers in the harvest, Gabelman trains students in evangelism and leads mission trips with a ministry that reached one million souls and distributed the same number of Bibles between 1992 and 2016.

Over a 10-year period, Gabelman alone distributed 12,000 of his “I.O.U. Love” ministry cards in Colorado, his home for many years. Inspiration for his cards comes from Romans 13:8: “Owe nothing to anyone except to love one another; for he who loves his neighbor has fulfilled the law.” 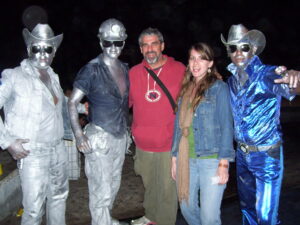 Evangelizing in Mazatlan, Mexico during Carnaval.

Arrested, punched and threatened at knife point for sharing the Gospel in the United States, Cuba, China, Mexico and El Salvador, Gabelman one time ventured into a unique mission field that could have destroyed his reputation as a man of God – a nude bar. Instead, he led a dancer in a strip club to Jesus, much like one of his soul-winning heroes, Arthur Blessitt. The evangelist who’s carried a cross to the nations, Blessitt early in his ministry led Bible studies in a women’s dressing room inside a bar. It was located next door to his coffee-house ministry on Sunset Strip in Hollywood, California. 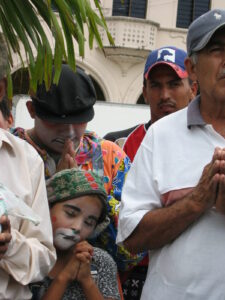 Taking up the cross for Gabelman means going the distance to reach one more soul with the Gospel, and training others to join the harvest.

A Spirit-filled evangelist who’s witnessed miracles, healing and angels since encountering Jesus as a drug-pushing, thieving, drinking, lost hippie in 1979, Gabelman pours passion for the Savior into ministers in training.

As world missions director for Victorious Christian Harvesters (VCH) and International Harvesters Institute (IHI) in Laredo, Texas and Mexico, Gabelman imparts to students passion for Jesus and dependence on gifts of the Holy Spirit in winning souls. Doing their part to populate heaven with souls, VCH’s founders, Gabelman and the ministers he trains are laboring to reach 10 million people and distribute as many Bibles.

A former youth pastor who partnered with Gabelman and his wife Kathleen for 10 years at a Spirit-filled church in Colorado, Pastor Bob Groeneman recalls the couples’ leadership of 20 winter and summer camps, five mission trips and numerous outreaches by young people.

“Bob is an extremely faithful ministry leader and the most honest and constant friend I have,” says Groeneman, now a senior leader at a church in northern California.

With powerful stories from years on the streets – coupled with tried and true biblical tools for sharing the good news of Jesus – Gabelman encourages students and seasoned saints to help reach the world’s nearly 8 billion people, beginning within their spheres of influence. 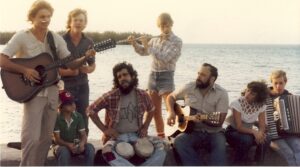 Worship on the Sunset Pier in Key West, Flordia.

Born again after reading a Gideon’s New Testament in 1979, Gabelman first shared the Gospel within weeks of his first encounter with Jesus and the manifest presence of the Lord in Key West, Florida, where he served in the U.S. Navy.

Today, Gabelman teaches what he calls seven essentials of personal evangelism, beginning with the most important principle of all ministry – a passionate relationship with Jesus. “I personally always believe the key to anything we do in ministry is relationship with Jesus. To be effective in soul winning requires hearing the heartbeat of God – none perish, all saved,” Gabelman says.

The six other essentials of personal evangelism flow from the first: compassion – a burden for the lost; knowing – the end of lost souls; beginning – praying for lost people; continuing – what to pray for; action – what to expect from praying; power – the message of the Gospel. Part of a training manual for ministry-school students, the seven essentials of personal evangelism also form the lion’s share of Gabelman’s recently published book, “The Day of Good News.” 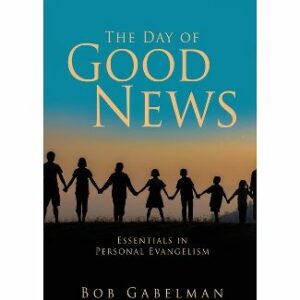 The book is replete with 60 stories of supernatural encounters between Gabelman and people desperately in need of salvation. One of them was a young man whose devil-worshipping parents named their son Damien Lucifer at birth, then later shot heroin into his arms as a teen. After hearing the Gospel, “Lucifer” gave his heart to Jesus, crying like a newborn baby and holding onto Gabelman as they prayed together in downtown Denver.

Another miraculous salvation story involves a woman who first ridiculed – then after being physically abused by her boyfriend – thanked the man she and others on the streets called “da preacher.” Her emotional deliverance – both physically and spiritually – is one of Gabelman’s favorite stories because it demonstrates Jesus’ love and the power of His name.

It unfolded on a wintry night in Longmont, Colorado, where Gabelman was walking by what he calls a flea-bag hotel. On previous nights, he knocked on doors inside the rat-infested hotel in hopes of sharing the Gospel with its residents. On this cold evening, Gabelman saw a woman talking on the phone and, at the same time, he heard the Holy Spirit say, “Talk to her.”

Ending her phone conversation, the woman turned toward the hotel doorway when Gabelman called out to her.

“She told me a story in which years earlier I shared the good news with her and her friends, who had spent all of their rent money on crystal meth. They were all high.

“She said, ‘We really treated you badly and humiliated you but something you said stuck with me,’” Gabelman recalls of the night.

“It’s something I’ve said to people when things don’t go well in sharing the Gospel with them. I say, ‘Wherever you are, whatever you’ve done, whatever your situation, cry out to Jesus and He will save you,’” Gabelman says.

The woman told him she knew he was filled with love and concern for her friends the night they first met. His words stuck with her after she moved to Minneapolis, Minnesota with her boyfriend, who began drinking excessively. Pregnant and frightened, the woman endured abuse from her boyfriend who, later, was the father of her baby.

On a Friday night after work, he came home from work and began beating her to the kitchen floor. As she lay there, blood flowed from her ear.

“She wiped it with her hand and saw the blood, freaking out. Then she remembered what I’d said years before. She screamed, ‘Jesus help me, save me,’” says Gabelman.

The boyfriend ran out of the house, giving the woman time and space to grab her daughter. On a cold Minneapolis night, she got on a bus headed to Colorado where she first met “da preacher.”

As she told the story Gabelman began to cry, realizing anew the depth of Jesus’ love and acceptance of the woman who desperately called out His name, just as he’d instructed her group of friends to do three years before.

For more information about how you can begin to evangelize like Gabelman – one soul at a time – or to support the ministry and buy a book, email him at ioulove@att.net or bob@vcharvesters.org. “The Day of Good News” is available through Amazon, Barnes and Noble and Xulon Press.