Top Posts
There’s A Light That Enters Houses With No...
Knowing the One Who Always Keeps His Word
Pregnancy Resource Centers Fight For Life Amidst Opposition
This World is Not Our Home
Lessons Learned From a Gingerbread House
Let There Be Peace on Earth
‘I Wanna Dance’ movie: Whitney Houston’s success and...
Fact Finding, Sight Seeing, and Prayer Walking
Kidney donation led to 8 life-saving surgeries
The Power of Curiosity
Home Tags Posts tagged with "Government oppression"

Government-led oppression means that without official registration, people cannot obtain marriage certificates, birth certificates for their children, or even open a bank account. One of the most immediate and serious consequences is that they are unable to purchase health insurance, according to International Christian Concern (ICC).

ICC said Mr. Ly A Lam and his not-legally-recognized wife, Vang Thi Mo, are both originally from Dien Bien province in northern Vietnam. Under pressure from the local authorities to renounce their Christian faith in 2013, they both migrated to Doan Ket Commune, a community located in the jungle and mostly made up of displaced Hmong Christians in central Vietnam. In their new residence, Lam’s family, like the other 170 households in the commune, does not have household registration. 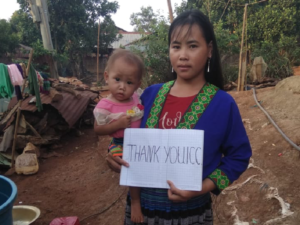 They suffer tremendously as a result. They have been denied the right to an education, to buy and own land, to set up a business, to be legally employed, to access state-owned insurance, to legally marry, and to have the father’s name included in their children’s birth certificates.

In August 2018, Lam fell ill and had to be hospitalized. He was diagnosed with a severe stomach ulcer. Without household registration, his family was not eligible for social security or medical care. His wife tried to get a loan from a state bank, but was told that a household registration was required. The hospital advised Lam that if the police of Dak Ngo Village certified that he was a local resident, the hospital fee would be waived.

The police, however, refused his request for certification because his family did not have household registration. Without any other options, Lam’s wife had to sell the family’s moped, which helped Lam earn a living by running errands and doing odd jobs for neighbors. The sale of the scooter brought in the equivalent of $430 USD. Lam’s wife had to borrow another $430 from neighbors to pay for hospital fees and medication.

As Lam recovered, he worried about the livelihood of his entire family. His wished to buy a motorcycle to continue working and bringing food to the table for his family of five.

In spring of 2019, ICC joined hands with local partners and offered to purchase a motorbike for the family. “When we heard that our request was accepted and we would have been able to buy a motorbike, we were so happy,” said Vang Thi Mo.

“I will use this scooter to go to our farm and to go to my workplace where I work as a laborer,” added Lam. “Our family is so grateful for your help.”

The author of this story, Michael Ireland, is a self-supported media missionary with ANS. Click here to support him as a missionary journalist.
May 31, 2019
FacebookTwitterPinterestEmail