Top Posts
Pregnancy Resource Centers Fight For Life Amidst Opposition
This World is Not Our Home
Lessons Learned From a Gingerbread House
Let There Be Peace on Earth
‘I Wanna Dance’ movie: Whitney Houston’s success and...
Fact Finding, Sight Seeing, and Prayer Walking
Kidney donation led to 8 life-saving surgeries
The Power of Curiosity
When Love Came Down at Christmas
A Walk of Faith Begins with a Step...
Home Tags Posts tagged with "He Intends Victory" 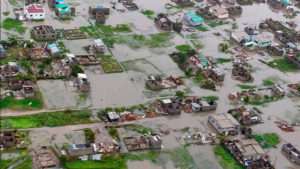 The weather system had been building and moving across south-east Africa for over a week, causing floods and destruction in Mozambique, Malawi and Zimbabwe. At least 2.6 million people have been affected. According to the UN it could be the southern hemisphere’s worst ever disaster.

In Mozambique, an estimated 1.7 million people were in the path of the cyclone, and at least 1,000 have died.

Barnabas Aid stated: “Countless houses and churches have been damaged; those made of mud have simply disappeared. In the port town of Beira, 90% of the buildings are damaged or destroyed. An Anglican Mozambican bishop has appealed urgently for food, water and shelter as well as mosquito nets to protect the newly homeless from disease.”

In Zimbabwe, crops were washed away – a catastrophe in a country that was already in food crisis and expecting a poor harvest in April-May. Now there will be no harvest at all in many parts. Zimbabwean Christian ministries are requesting funds from Barnabas for medical supplies, body bags and food (maize meal, beans and cooking oil).

A Barnabas Aid spokesman said: “We are working with our Christian partners across south-east Africa to help Christians affected by Cyclone Idai.”

Meanwhile, He Intends Victory (HIV) with outreaches in Mozambique, Malawi and Zimbabwe, says that according to the U.N. and government officials, Cyclone Idai has affected more than 2.6 million people in the three southern African countries,

The port city of Beira, Mozambique was the hardest hit with more than 1,000+ feared dead and many missing.

Bruce Sonnenberg of HIV said: “Most of our Support Groups are in this area of the country. The airport is closed, electricity is out, all roads into the city of 500,000 are completely cut off, and many homes have been destroyed with estimates up to 90% of the city!”

Sonnenberg added that in Zimbabwe, “over 100 people have died from the floods so far, according to the government.”

“The deaths are mainly in Zimbabwe’s Chimanimani, a mountainous area along the eastern border with Mozambique,” he said, adding that Harare, “which although drenched, is already in the middle of political turmoil.”

In Malawi, where HIV has 280 Support Groups, 56 people have died and people “are now facing a second threat of flash floods” following the cyclone, according to the International Federation of Red Cross and Red Crescent Societies on Twitter.