Top Posts
Colorado football coach Sanders’ unabashed faith
There’s A Light That Enters Houses With No...
Knowing the One Who Always Keeps His Word
Pregnancy Resource Centers Fight For Life Amidst Opposition
This World is Not Our Home
Lessons Learned From a Gingerbread House
Let There Be Peace on Earth
‘I Wanna Dance’ movie: Whitney Houston’s success and...
Fact Finding, Sight Seeing, and Prayer Walking
Kidney donation led to 8 life-saving surgeries
Home Tags Posts tagged with "Hong Kong"

HONG KONG (ANS)  — When Hong Kong reverted back to Chinese rule from the British Empire on July 1, 1997, the Chinese government assured distressed Hong Kongers that they would implement a “one country, two systems” policy to allow Hong Kong to have its own laws and its unique way of life would stay the same for at least 50 years.

However, Hong Kong is on the trajectory of losing its promised autonomy to Beijing, reports Gina Goh for International Christian Concern (ICC).

In her report for ICC, Goh says The Basic Law put in place for Hong Kong also states that the central government is banned from interfering in Hong Kong’s affairs, and the Communist Party should establish no official presence. Freedom of speech, press, religion and protest are also protected by law.

Two decades later, however, almost all of the regulations above have been violated by Beijing, with the “high degree of autonomy” on executive, legislative and independent judicial power reserved for Hong Kong rapidly disappearing.

Concerned Hong Kongers, especially Christians, who have traditionally been at the forefront of social movement, fighting against injustice, decided to band together and call for genuine universal suffrage as guaranteed in The Basic Law in 2013.

Professors Tai Yiu Ting and Chan Kin Man, both Christians, together with Reverend Chu Yiu-ming, organized the “Occupy Central with Love and Peace” civil disobedience campaign on March 27, 2013 to stage a mass sit-in. Protestors flooded into Central District to urge Beijing not to vet candidates for Hong Kong’s top leader in the 2017 elections. 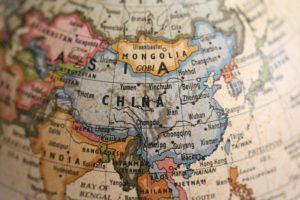 Map of China with location of Hong Kong

ICC says their campaign took off and gained support from tens of thousands of protesters. The joining of student protesters led to a 79-day long “Umbrella Movement,” which took its name from the shield protesters used against pepper spray.

Despite the large crowd, the pro-democracy activists were unable to achieve their goals. Beijing continues to exert its power on Hong Kong’s political matters. On April 9, a Hong Kong court found nine leaders of the 2014 “Umbrella Movement” guilty on charges of incitement and conspiracy for their role in leading the mass protest. These activists face prison terms of up to seven years.

Reverend Chu Yiu-ming, the minister of Chai Wan Baptist Church in Hong Kong, the eldest among the nine convicted, delivered a heartfelt statement on Tuesday. With tears in his eyes, he read out his final plea to the court ahead of his sentencing.