Top Posts
There’s A Light That Enters Houses With No...
Knowing the One Who Always Keeps His Word
Pregnancy Resource Centers Fight For Life Amidst Opposition
This World is Not Our Home
Lessons Learned From a Gingerbread House
Let There Be Peace on Earth
‘I Wanna Dance’ movie: Whitney Houston’s success and...
Fact Finding, Sight Seeing, and Prayer Walking
Kidney donation led to 8 life-saving surgeries
The Power of Curiosity
Home Tags Posts tagged with "Hurricane Maria"

As the exhibit description states, “There is a sense of urgency in many of the new works included as artists negotiate their role in facing the challenges of recovery in the aftermath of hurricane Maria. According to participating artist Elsa María Meléndez, who lives and works on the island, ‘Puerto Rico needs us artists to confront images, engage, resist and agitate, strengthen the questioning of power systems, and explore unfamiliar lines of thought. Puerto Rico’s current cultural crisis and art institutions face hardships worsened by hurricane Maria. Surviving the phenomenon and becoming active agents of solidarity and selflessness has led us toward an ideological shift, in which audiences can internalize social issues and revalue educational alternatives. Culture and the arts are tools for human beings to reconstruct themselves.’” 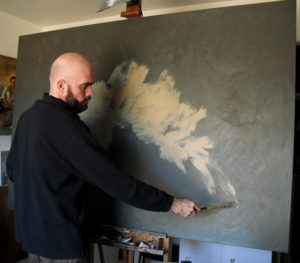 Running through October 20, 2018 at 516 Arts in downtown Albuquerque, Puerto Rico:  Defying Darkness highlights the works of several artists, including Elsa Maria Melendez, Nathan Budoff, Antonio Martorell, Frances Gallardo, Maritza Castillo, Juan Sanchez, and Chemi Rosado-Seijo.  Yet it was the work of Patrick McGrath Muñíz that drew me to the exhibit.

I first encountered Muñíz’s mix of iconography and social commentary at the Albuquerque Museum of Art.  In the hallway entrance to the permanent collection a painting named the Disneyification of a Hero holds a prominent place.  In the painting, one sees the hero (possible Biblical or historic reference) surrounded by a host of characters from an evil Mickey Mouse to Pocahontas.  The description reads, in part, “Historic puzzles linking disparate images from history and art history, popular culture, Christianity, European and Native American mythology.”

Later, I viewed Muñíz’s work in Santa Fe at Evoke Gallery [3].  There I was able to experience a few of his paintings, a confluence of Christian imagery intermixed with various social concerns:  the environment, animals, conquest, and economics. I was hooked.

In an article for the Albuquerque Journal, journalist, Kathaleen Roberts, writes concerning Muñíz, “Born in New York, Muñiz grew up in Puerto Rico before discovering Spanish colonial art when he was in college in (of all places) Georgia. Grounded in Renaissance, Baroque and Latin American colonial painting, his work addresses colonialism, consumerism and climate change. For him, the conquest represented by religious iconography and American commercialism spring from the same roots ‘There’s a continuous line between the colonial indoctrination and commercial pop culture propaganda,” said Muñoz, who now lives in Houston. ‘I don’t see any break in the pas.t’” 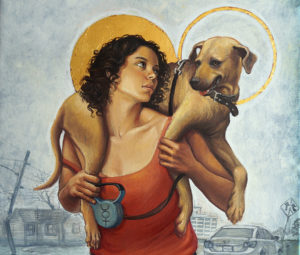 In Hi-Fructose Magazine, Muñíz drew a connection to his faith and art: “As an artist with a Roman Catholic background and growing up during the 1980s and 90s in the island of Puerto Rico, the oldest colony in the Western Hemisphere, I feel a deep interest in reconnecting with history and re-telling the story of climate change the way I know best, in drawings, paintings, and altarpieces.”

This link between the Christian faith and contemporary culture is reflected in Muñíz’s work represented in the 516 Arts exhibit. Prior to the opening of Puerto Rico: Defying Darkness, four of the artists sat down with curator, Dr. Josie Lopez, to discuss Puerto Rico, art, and the new exhibit.  There were many great thoughts expressed by each artist, deserving its own article and attention.  For this article, however, I’ll concentrate on Muñíz.

When asked by Lopez to give a brief overview of the art in the Defying Darkness exhibit, Muñíz. started by listing the hurricanes that effected Puerto Rico and his adopted home in Houston, Texas.  Muñíz. went on to describe his response to the hurricanes: “They have deeply affected me on a personal level. Life changes have become more of a personal issue. I feel we need to be aware and mindful of the topics that not only affect one place, but multiple of places. Originally, I was working more with Spanish-influenced iconography, it was darker.  Now my paintings are lighter, offering more hope. There is much to be learned from community, family, and nature, things that stood up to the hurricanes.” 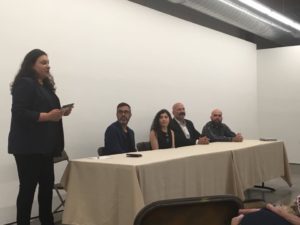 Artist round table at 516 Arts in Albuquerque, New Mexico

Lopez asked the panel about the effects of the hurricanes and how the disasters informed the painting process.  Muñíz. states, “There are real consequence [to natural disasters].  People are living through the effects.  And these are the stories we should be talking about, stories about how humans are uniting through community, helping one another and finding ways to survive. We can’t expect the government—as we have seen—to help; it’s failed us.  When I went to Puerto Rico with my mom I was deeply moved by the people.  People had to help each other.  That was what was real.  People have the tools to improve life; it’s up to us.  We need to talk to each other and help one another.  And these are the stories that I was interested in my current work: personal narratives, personal struggles.  As an example, my cousin Alba is volunteering at an animal sanctuary, St. Francis of Assisi.  She is helping out, rescuing pets that were left behind by people fleeing the hurricane.  One of my paintings was inspired by her.  The whole predicaments on earth should unite us.  With natural disasters becoming stronger—as the fires in California show, we need to realize it’s all tied up together.  People need to see the connection, the entire environment is related, we’re on the same boat.  And this is why I like to use the boat as a symbol in my work.”

Muñíz’s paintings can be seen as a metaphor for inhabitants on earth, be it boats on turbulent water or people helping animals escape fire or flood.  In his work there is a reminder—not only of our troubled world, but a testimony of the heart and soul of the people.  But the results are similar:  help the boat get to safety, seeking hope amidst the hapless situation. 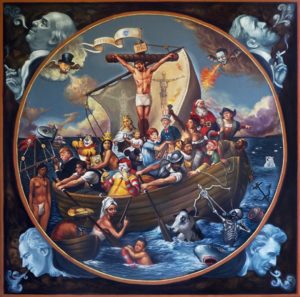 Furthering the idea of an artist as a symbol of hope—particularly for the Puerto Rican people, the exhibit catalog states, “Puerto Rico: Defying Darkness features artists who continue to be beacons of hope and resilience. As a ‘non-incorporated’ territory of the United States, the island is struggling to recover from punishing debt and energy crises that expose the legacies of colonialism and the impacts of U.S. policies. In the aftermath of the devastation of Hurricane Maria, many on the island are still without basic necessities including electricity and water. In addition to the struggle against literal darkness, the island faces looming budget cuts in response to a $72 billion debt. The large-scale exodus of thousands of Puerto Ricans to the U.S. mainland highlights both the inept government response to the current disaster as well as the ongoing implications of past legislation. The Jones Act of 1917 granted citizenship to Puerto Ricans, restricted its ports to U.S. ships only, and barred the territory from statehood. Despite these challenges, many Puerto Ricans are committed to recovery. Artists are playing a unique role in organizing relief efforts on the ground and by utilizing the arts to build hope and promote the resourcefulness of the Puerto Rican people.”