Top Posts
Pregnancy Resource Centers Fight For Life Amidst Opposition
This World is Not Our Home
Lessons Learned From a Gingerbread House
Let There Be Peace on Earth
‘I Wanna Dance’ movie: Whitney Houston’s success and...
Fact Finding, Sight Seeing, and Prayer Walking
Kidney donation led to 8 life-saving surgeries
The Power of Curiosity
When Love Came Down at Christmas
A Walk of Faith Begins with a Step...
Home Tags Posts tagged with "IFES World Assembly"

MADISON, WISCONSIN (ANS) — InterVarsity Christian Fellowship/USA will be among the 170 affiliates of the International Fellowship of Evangelical Students (IFES) gathering in South Africa July 3-11, 2019, for the IFES World Assembly, which is held every four years.

InterVarsity President Tom Lin eagerly anticipates the opportunity for InterVarsity staff and student leaders to interact with Christian student movements from other countries and cultures. 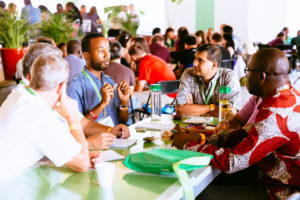 “There is so much to learn from one another, including from movements in post-Christian Western contexts, majority world contexts where Christians are marginalized on campus, and contexts with significant racial and political division,” he said.

One of the current IFES initiatives is called Breaking New Ground, which aims to plant 100 new student groups in cities across the globe. It springs from the same vision as InterVarsity’s 2030 Calling, with the goal of partnering with other ministries to see witnessing communities established at 2,500 US colleges and universities by the year 2030.

“My hope is that our InterVarsity delegation can be encouraged by, and learn from, the innovation happening in these planting efforts,” Lin said.

“We also have much to learn from other movements regarding how to effectively engage alumni, mobilize volunteers, and partner well with churches.”

“I pray that we would listen and learn from each other,” Thiel said.

“God is moving through students around the world in issues like prayer, witness, challenges of campus access, empowering volunteers and alumni to lead groups, and seeking the shalom of the land.  We have much to learn.”

Lin added, “I always leave World Assembly with a deeper faith and deeper commitment to our mission. Our unity together as a diverse global fellowship is always so inspiring.”

InterVarsity was officially organized in the US in 1941 and was one of the 10 student movements that founded IFES in 1947. InterVarsity currently has 1,121 student and faculty chapters on 772 US campuses.

The author of this story, Michael Ireland, is a self-supported media missionary with ANS. Click here to support him as a missionary journalist.
June 27, 2019
FacebookTwitterPinterestEmail