Top Posts
Knowing the One Who Always Keeps His Word
Pregnancy Resource Centers Fight For Life Amidst Opposition
This World is Not Our Home
Lessons Learned From a Gingerbread House
Let There Be Peace on Earth
‘I Wanna Dance’ movie: Whitney Houston’s success and...
Fact Finding, Sight Seeing, and Prayer Walking
Kidney donation led to 8 life-saving surgeries
The Power of Curiosity
When Love Came Down at Christmas
Home Tags Posts tagged with "In the Crossfire"

MUNICH, GERMANY (ANS) — A unique, disturbing and touching exhibition of the Hungarian National Museum under the title In the Crossfire: Christian Persecution in the Middle East drew attention to the sad reality of the persecution, suffering, fear and destruction of Christians in the Middle East and North Africa.

The interactive exhibition, in Hungarian and English, was on display from March 27 to April 14, 2019 at the Hungarian Consulate General in Munich, according to an article by Abdulmesih BarAbraham for the Assyrian International News Agency (AINA). 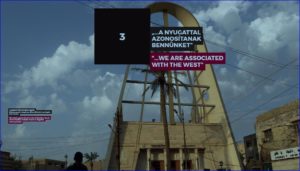 A graphic from the Hungarian exhibition

AINA said the aim of the exhibition, as explained by Ms. Krisztina Spiller, Consul in Munich, was “to draw attention to the development taking place in the Middle East with respect to Christians, point out the unsustainability of their situation, explain the causes, and outline the consequences.”

AINA said most of the interviews and pictures were prepared by experts from the Hungarian Migration Research Institute, Avicenna Institute of Middle Eastern Studies, and Hungarian National Museum, from fact finding missions in 2016 and 2017.

NGOs, like Open Doors, which monitor religious discrimination worldwide, report regularly that Christians in many countries are the targets of most attacks. The situation is especially desperate in the Middle East, in the cradle of Christianity, where the survival of Christian communities of two thousand years is at risk.

On February 4th, 2016, the European Parliament passed a resolution in which it recognized the atrocities committed by ISIS (Islamic State) against Christians and other ethnic and religious minorities in Iraq and Syria as genocide.

ISIS systematically persecuted religious minorities in its self-proclaimed caliphate in Iraq and Syria, kidnapping hundreds of Assyrian in Syria and forcing them to live under its radical strand of Islam in the central Syrian city of Al-Qaryatain.

According to a recent article by the British newspaper The Guardian, Christianity is the most persecuted religion, though the fate of Christians is largely ignored in the West.

The exhibition was designed as a traveling exhibition by the Hungarian National Museum and has already been displayed in Budapest (Fall 2017), New York, and Washington (February 2018).

It consists of six topical panels, each highlighting different themes of the situation of the Christians:

** Christians in Danger of Extinction in the Middle East

** The Aims of Jihadism: Humiliation and Banishing

** “…We are Associated with the West”

** The Destruction of Constructed Heritage

** The Causes of Christians Persecution — and Flight

** The Future: Hopes and Efforts

Similarly, each panel is built of various pictures and explanatory text; background information is complemented by videos and interactive displays. Records (video and/or text) of personal profiles of several people enrich and deepen the impression of the viewer. Country profiles with respect to Christians population are provided for Egypt, Jordan, Lebanon, Iraq, and Syria.

Panel 3, for example, explains what it means being associated with West: “Jihadist propaganda inherently equals Christians and medieval crusaders with the secular West, atheist in their interpretation.”

On the one hand they identify Christians living in the Middle East as descendants of conquering crusaders, who hated Islam and wanted to recapture the lost territories for Christianity. On the other hand, they consider them as agents and attendants of the western colonizing powers…Christian communities in the Middle East are outposts of the enemy for the Jihadists, whose aim is to eliminate the Christian civilization worldwide in the long run.”

AINA reported that according to the Chief Curator, Ms. Bianka Speidl (Hungarian Migration Research Institute), “daily explosions, bloody confrontations, the humanitarian disaster covering most of the Middle East and North Africa has become a routinely repeated element of the news. However, the exhibition does not look at reality through the eyes of Western journalists and experts. The pictures and items were contributed by people who bear the marks of destruction on both body and soul: they all have a name, a family, a home, a love, they have their desires, and most importantly, they have their dignity.”

The former vice president of the German Bundestag and member of the Christian Social Union (CSU), Johannes Singhammer, who visited the exhibition, is cited saying that “Hungary’s humanitarian policy for the protection of persecuted Christians is unique in the world and with this this exhibition the country set an example for the West.”

The first conference for persecuted Christians was hosted by Hungary’s government in October 2017.

The Hungarian government is continuing its policy of supporting Christian communities in the Middle East. It is financing the rebuilding of the entire Assyrian village Telesqof in the north Iraq, enabling more than 900 families to return.

According to Ms. Spiller, the government has recently set also a scholarship program dedicated for Christian young people studying in Hungary. After completing their studies the students will return to help their home communities with their gained knowledge, and participate in the reconstruction of war-destroyed villages.