Top Posts
There’s A Light That Enters Houses With No...
Knowing the One Who Always Keeps His Word
Pregnancy Resource Centers Fight For Life Amidst Opposition
This World is Not Our Home
Lessons Learned From a Gingerbread House
Let There Be Peace on Earth
‘I Wanna Dance’ movie: Whitney Houston’s success and...
Fact Finding, Sight Seeing, and Prayer Walking
Kidney donation led to 8 life-saving surgeries
The Power of Curiosity
Home Tags Posts tagged with "India’s Caste System"

NASHVILLE, TENNESEE (ANS) – Existing for more than 3,500 years, the present day ‘caste’ division of India’s population is still the largest manifestation of discrimination on the planet, affecting the lives of more than 150 million people.

Solomon Darwin was born an “Untouchable” in a small village in India. Today, Professor Solomon Darwin is the Director of the Garwood Center for Corporate innovation at the Haas School of Business at the University of California Berkeley.

Darwin is an international speaker recognized by his peers, executives and students and by the recognition of numerous awards for his innovative leadership and passion for teaching. 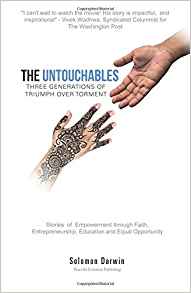 Cover artwork for The Untouchables

According to a media release, Darwin’s new book, The Untouchables, offers a remarkable and moving story of God’s miraculous  breaking of one family’s bonds  from India’s powerful “caste system” to produce three generations of miracles.

Known as “The Father of the Smart Village Movement,” he has developed scalable business models that support rural village markets by aligning global brands, startups, and local cottage industries to form dynamic and sustainable eco-systems.

He has worked with the government of India as well as with major corporations including Google, IBM, Ericsson, PayPal and Cisco to make the Smart Village concept a global reality.

A devoted Christian, he has founded a sustaining ministry in his native hometown in India that fully functions as a school, medical facility, and orphanage for the small community and those surrounding. Solomon Darwin credits his grandmother for his rise from the “Untouchable” caste system of India to international influence. He is the author of the book “The Road to Mori: Smart Villages of Tomorrow,” and the forthcoming The Balance Sheet of the Earth.

The new book’s re-telling of this true story is made even more remarkable by the author himself.  Solomon Darwin, born an Untouchable in India’s small village of Mori, has since risen to international prominence as a major world influencer in education and technology—including his global recognition as “The Father of the Smart Village Movement.”

In a book so moving it has been optioned in Hollywood as a TV series development project, The Untouchables recounts God’s hand of intervention and mercy in the life of Solomon’s  grandmother, Subbamma Nalli. Her birth in 1890 into the wretchedly impoverished life of an Untouchable meant that she would live not one life of anguish, but multiple lives of repeated torment in the Hindu belief system of reincarnations yet to come.

Working since her childhood in the lowest of menial jobs the status of her birth dictated and still barren in marriage in her late 30’s, life held no promise of a child for Subbamma  despite her prayers of desperation to the more than 330 million deities of her Hindu  religion. Solomon’s grandmother was on a final journey to drown herself in the dark river waters that passed near Mori when her encounter with God came.

A young English missionary, Charles Whitehouse happened by at that moment, crossing her path on the river banks.  He prayed with her.  From that moment of “chance” encounter with Jesus, her journey of death had ended in a journey of new life.  Reborn, with a new purpose she would become a mother to four and a channel of blessing to countless many as the chains of her caste were spiritually broken.

As Darwin recounts, with meager education and no money, his grandmother and grandfather would escape to Burma. Here Subbamma started a small lace business, forming a partnership with a missionary who was willing to export a few sample quantities of her handiwork. From her small beginnings as an entrepreneur, Subbamma found success in  a myriad of small business ventures over the years rising to be the channel of blessing she had vowed to be. Helping countless lives and giving  the needy, including those in the world of the Untouchables, new hope and opportunities they’d never before dared dreamed of, by the end of her life, she had established a church, a school, started a birthing center and founded an orphanage.

In the memory of her many good works, the location of her home is now known as “Subbamma House” on the campus of  the Riverside School in India.

In a second generation of miracles Darwin’s father, through the kindness of a teacher who saw remarkable potential in the young teenager, was allowed to go to school, a rare privilege for an Untouchable child.  Healed from tuberculosis through the power of his mother Subbamma’s prayers, he became a Christian during his final year of college. Thankful to God for his healing and with a new heart of compassion for the needs of others, Solomon Raju subsequently became the first Christian man from the Untouchable caste to graduate from college in India with a PhD degree. With scant opportunities in a county that followed the caste system, he prayed fervently for opportunity in America. After many disappointments and rejections, he was offered a position at the world-renowned Scripps Institute of Oceanography in San Diego.

Ultimately publishing numerous scientifically recognized research papers and credited with the discoveries of scores of new forms of marine life, Solomon Raju was presented the Outstanding Educator in America Award in 1976. In 1986, he founded the “Project India Compassion Trust,” dedicated to providing education and medical care and impacting the lives of a new generation of Untouchable children on the road to finding hope and betterment.

In this, the third generation of empowerment through faith, entrepreneurship and education, as seen in his own global accolades, Solomon Darwin remains humble in recounting his personal testimony to readers.

He noted:  “I never became a doctor, as my father had hoped, but today I hire doctors. I never became an entrepreneur as Subbamma would have chosen I be.  But today I teach Silicon Valley engineers and leading corporate executives around the world. While I never became a preacher, my unusual name has opened opportunities to change the thinking of religious scholars and practitioners.

“My secret to success?  Subbamma read to me daily as a child from the book, Pilgrim’s Progress.  It was here I met Jesus and developed my life values as well as my work ethics.”

The Untouchables book in now available at Amazon.com.