Top Posts
Knowing the One Who Always Keeps His Word
Pregnancy Resource Centers Fight For Life Amidst Opposition
This World is Not Our Home
Lessons Learned From a Gingerbread House
Let There Be Peace on Earth
‘I Wanna Dance’ movie: Whitney Houston’s success and...
Fact Finding, Sight Seeing, and Prayer Walking
Kidney donation led to 8 life-saving surgeries
The Power of Curiosity
When Love Came Down at Christmas
Home Tags Posts tagged with "Indonesia"

JAKARTA, INDONESIA (ANS) — A married couple has been convicted and sentenced to prison for their suspected involvement in the bombing of three churches in Indonesia’s second largest city, Surabaya, in May 2018.

The attacks are an indicator of growing religious intolerance which has been observed in Indonesia in recent years. There are concerns that such intolerance could be a factor in Indonesia’s upcoming elections, which are scheduled to take place next month.

Agus Satrio Widodo received sentence of eight years, and his wife Damayanti was given three years and four months after a West Jakarta court found them guilty of ‘aiding criminal acts of terrorism’ and ‘being involved in a criminal conspiracy’ on March 14. 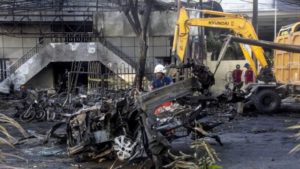 The couple, along with a third defendant, were sentenced in connection with a series of suicide bomb attacks on three churches in Surabaya that were carried out by a single family on May 13, 2018. At least 14 people were killed and more than 30 injured in the attacks, which were described at the time as the worst terrorist attack in Indonesia since 2005.

CSW’s East Asia Team Leader Benedict Rogers said: “We welcome the decision to convict and jail these people for their involvement in the appalling Surabaya attacks. While the bombers themselves died in the explosions they perpetrated, it is important that anyone involved in the planning and preparation of the attacks is brought to justice.”

Rogers added: “Religious intolerance and extremism has increased in Indonesia in recent years, threatening Indonesia’s tradition of pluralism, as CSW’s research over the past decade has shown. While bringing the perpetrators of terrorism to justice is vital, more must be done to counter religious intolerance within society, by reforming discriminatory laws, taking action to address hate speech, protecting places of worship and ensuring that religious intolerance and identity politics are not used in the forthcoming presidential elections next month.”