Top Posts
Colorado football coach Sanders’ unabashed faith
There’s A Light That Enters Houses With No...
Knowing the One Who Always Keeps His Word
Pregnancy Resource Centers Fight For Life Amidst Opposition
This World is Not Our Home
Lessons Learned From a Gingerbread House
Let There Be Peace on Earth
‘I Wanna Dance’ movie: Whitney Houston’s success and...
Fact Finding, Sight Seeing, and Prayer Walking
Kidney donation led to 8 life-saving surgeries
Home Tags Posts tagged with "Internally Displaced Persons"

NEW MALDEN,  United Kingdom (ANS) – Christian Solidarity Worldwide (CSW) www.csw.org  has joined eight other organisations and individuals in writing to various officials of United Nations (UN) and the African Commission on Human and Peoples’ Rights urging them for urgent assistance for Eritrean refugees in Ethiopia’s Tigray region, where a violent conflict has been taking place since 4 November. 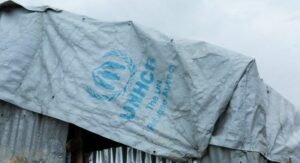 A building in an IDP camp in Tigray. Josh Brown – CSW

The letter informs the addressees, among them the UN Secretary General Antonio Guterres, that “In the midst of this conflict, the situation of some 100,000 Eritrean refugees in Tigray, most of whom live in four UN-sponsored refugee camps and many of whom are unaccompanied minors, has deteriorated markedly.”

Last week, CSW raised concerns regarding the presence of thousands of Eritrean troops in Tigray, which posed a serious threat to the wellbeing of Eritrean refugees in the region. Attacks and raids on at least three of the four main refugee camps in the region have since been confirmed, including the bombing of Adi Harush camp.

The letter also states that “reports are emerging that a significant number refugees may have been seized at gunpoint from  Hitsats, Shimelba and Shire town, and either forced onto the front lines of the fighting, or forcibly returned to Eritrea, where they will inevitably face indefinite detention, forced conscription, torture and other inhuman, cruel and degrading treatment, or death.”

Eritrean officials are deemed to have committed crimes against humanity since 1991. In light of these concerns, signatories to the letter, including the UK Crossbench peer Lord Alton of Liverpool, appeal to the addressees to “remind the Ethiopian authorities of their obligations under the African and UN Refugee Conventions”, and to urge the Ethiopian government “to prioritise the protection of this vulnerable community… to fully restore communications and other suspended services to Tigray, and to facilitate independent investigation and verification of the wellbeing of refugees and civilians by African Commission and UN special procedures.”

CSW’s Founder President Mervyn Thomas said: “As reports emerge of refugees being forcibly returned to Eritrea amid a conflict where there is already credible evidence of a possible atrocity crime, it is essential that the international community takes swift and decisive action to intervene. We urge Ethiopia’s prime minister, Abiy Ahmed, to prioritise the protection of refugees within its country’s borders.  Their forcible return to a country that is deemed to have committed crimes against humanity is an appalling violation of international law and humanitarian norms.  The fact that this is occurring in the country where the African Union is headquartered undermines the organisation’s precepts and is a sad indictment of its inability to protect the most vulnerable.

“Once again, we urge the Prime Minister to take immediate steps to de-escalate the conflict, and to enter into meaningful dialogue with regional representatives who are recognised and mandated by the people of Tigray. We also call on the government of Eritrea to withdraw its forces from Tigray immediately, and to end its egregious violations of the rights of Eritreans, both at home and abroad.”