Top Posts
There’s A Light That Enters Houses With No...
Knowing the One Who Always Keeps His Word
Pregnancy Resource Centers Fight For Life Amidst Opposition
This World is Not Our Home
Lessons Learned From a Gingerbread House
Let There Be Peace on Earth
‘I Wanna Dance’ movie: Whitney Houston’s success and...
Fact Finding, Sight Seeing, and Prayer Walking
Kidney donation led to 8 life-saving surgeries
The Power of Curiosity
Home Tags Posts tagged with "International Literacy Day"

LUCKNOW, INDIA (ANS – Oct. 5, 2018) — Illiteracy is a significant issue in South Asia and other areas of the developing world. September 8 was International Literacy Day and the goal of the South Asia education ministers was to end illiteracy from the entire region by 2017.

Gospel For Asia (GFA) says that if, as the saying goes, “in the world of the blind, the one-eyed man is king,” it is just as true that in the land of the illiterate, he who can read will have the power over those who cannot. 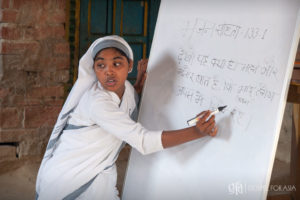 Several years ago, the Business Standard reported that “Illiteracy is the biggest menace (in South Asia), impeding development . . . for South Asia, which inhabits more illiterate population than anywhere else.” That article was written in 2013. The goal of the South Asia education ministers was to end illiteracy from the entire region by 2017.

The education ministers stated at that time: “We pledge to achieve total literacy by 2017. TEACH Mission is a holistic campaign which focuses not just on teaching alphabets and numbers but also on teacher support, e-learning, adult literacy, etc.”

Nonetheless, GFA says that UNICEF has reported that over 75% of the 781 million illiterate adults in the world live in South Asia, West Asia, and Sub-Saharan Africa. Almost two-thirds of those people are women.

A GFA media release states: “Literacy is an important outreach of many GMOs, including GFA and our field partners. We are engaged in teaching women and children to read and write so they do not remain trapped in poverty simply because they cannot read or write. Literacy will change their worlds.

“Although we teach with tens of thousands daily across South Asia, GFA and our field partners made special efforts to promote literacy on International Literacy Day 2018 just as they do every year across South Asia.”

GFA stated that this year, hundreds of new adult literacy centers were opened, including 66 in the Lucknow region alone. These centers will offer free literacy education to marginalized women including widows who live in slums and hard-to-reach villages where no education facilities exist for them.

Other partners distributed literacy books and study aids, such as notebooks and slates to the women who enrolled in the literacy centers and to children from economically stressed families living in slum areas.

The objective is to help these disadvantaged people gain a substantial advantage by learning to read and write. These elementary skills can pave the road for them and their children to escape the clutches of poverty through education that makes a difference.

GFA went on to say: “Several years ago, important officials recognized our efforts to increase literacy as ‘the best for this country and . . . is the best model for . . . religions, social trusts, organizations, and even the government, for social work and the upliftment of the poor.’”

The ministry concluded by saying: “The needs of the illiterate cannot be addressed with handouts.

“Raising awareness of their need and providing teaching solutions is the only way. This is especially important for nations like India which need more and more literate people to fill the expanding workforce of a nation that is on its way to becoming THE economic powerhouse in the world.”