Top Posts
There’s A Light That Enters Houses With No...
Knowing the One Who Always Keeps His Word
Pregnancy Resource Centers Fight For Life Amidst Opposition
This World is Not Our Home
Lessons Learned From a Gingerbread House
Let There Be Peace on Earth
‘I Wanna Dance’ movie: Whitney Houston’s success and...
Fact Finding, Sight Seeing, and Prayer Walking
Kidney donation led to 8 life-saving surgeries
The Power of Curiosity
Home Tags Posts tagged with "Iraq"

BAGHDAD, IRAQ (ANS) – Displacement by ISIS (Islamic State) has inflicted enormous trauma on Iraq’s ever shrinking Christian community, among them the displaced elderly.

Reconstruction goes on nonetheless. But for elderly believers, displacement placed them in a living coffin. 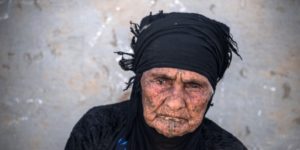 With relatives permanently displaced, many are like Sara: completely alone and unable to easily access the aid available to others more mobile, according to Claire Evans writing for International Christian Concern (ICC).

ICC says Sara doesn’t know her age, just the memories of at least 60 years gone by. Looking at her tattered furnishings, one would never know that until very recently, Sara’s life was completely different. She lived comfortably in a beautiful house surrounded by family. Now, sickness traps her in this small closet and her family is scattered across the world.

Sara is alone, with only the Rubik’s Cube in her hands to keep her company. Her front door is slightly ajar, a signal of hope that someone will walk by and choose to pass the time with her.

“Basically, I don’t have anyone. I have a sister in Basra. My brother is in the US. I have brothers and sisters who live in Lebanon. I really have no one. But when I was in Qaraqosh, I owned a house and wasn’t sick,” she recalled. Her hands let the cube drop into her lap as she leans back and begins to remember life before the Islamic State (ISIS) displaced her.

Originally from Baghdad, Sara is no stranger to life in a field of conflict. But through marriage, she would come to the Nineveh Plains and build a life in Qaraqosh. She worked as a gold trader, but on the side, Sara raised birds and sold them in the market. It was a good life.

“Changing my situation at this age, with my illness, it’s very hard,” she sighed.

ICC said 2014 was supposed to be a year of great joy. Sara’s nephew was preparing for marriage, and her dispersed family was gathering back in Iraq. Instead, it turned out to be the year that everything changed. The year that dispersal became displacement.

ISIS was coming — but no one knew with certainty what that meant. The first time that Qaraqosh experienced displacement, it did not last long and life returned to the city. The second time, however, was radically different.

“Changing my situation at this age, with my illness, it’s very hard,” she said.

Her nephew sensed that the situation was worsening, and was worried about her. He warned, “There are people from Mosul making use of the conflict to steal gold and money if you take it with you (while running from ISIS). It is better to leave it here and hide them.”

Sara took his advice, not realizing that this displacement would be permanent and that she would never again have access to her life’s savings.

“I have no money now. People ask me and I swear that I only have my ring. They know that I used to have wealth. I used to have a maid. But it is all gone now,” she said.

Finances, however, were far from her mind as she began to flee Qaraqosh.

ICC said that although she originally fled in a car, a checkpoint refused to allow the passage of vehicles. So she stepped out and walked her way to freedom. One slow step at a time, she pushed each foot in front of the other until she walked the 50 miles to Erbil.

“I was walking from 3:00 a.m. to 4:00 p.m. I couldn’t walk fast enough. People who were walking with me, left me. Another group would come, but they would walk faster and leave me.”

ICC said such strenuous activity put an enormous strain on her health. “I got sick a week after displacement. I don’t know, probably because I was terrified.”

She puzzled over her life’s changes as she turned her Rubik’s Cube. Her plight is not uncommon among the displaced elderly. Rebuilding looks toward a future that they may not be able to access. But that doesn’t stop Sara from hoping that someday, something better may come.

The author of this story, Michael Ireland, is a self-supported media missionary with ANS. Click here to support him as a missionary journalist.
June 5, 2019
FacebookTwitterPinterestEmail