Top Posts
Colorado football coach Sanders’ unabashed faith
There’s A Light That Enters Houses With No...
Knowing the One Who Always Keeps His Word
Pregnancy Resource Centers Fight For Life Amidst Opposition
This World is Not Our Home
Lessons Learned From a Gingerbread House
Let There Be Peace on Earth
‘I Wanna Dance’ movie: Whitney Houston’s success and...
Fact Finding, Sight Seeing, and Prayer Walking
Kidney donation led to 8 life-saving surgeries
Home Tags Posts tagged with "Isaiah 6:8" 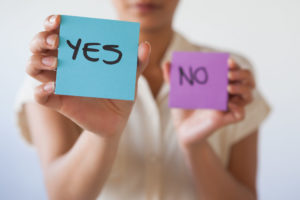 Nine months passed before I said “yes” to God. It was April 2005 when that still, small voice convinced me to go. Taking a leap of faith, I relocated from my hometown to a larger community almost 100 miles west.

My house sold quickly. I was excited, yet apprehensive at the same time. Moving to a new community, where I knew very few people, was the beginning of a new adventure. It was also the first step to placing my trust fully in Him.

Growing up, I was fearful of getting outside my comfort zone. I preferred the known to the unknown. Now, at age 51, I was stepping out in faith as a woman who’d been single for almost four years. I was leaving family and friends behind to obey God’s leading.

Examples abound in scripture of those who finally said “yes” to God. Moses tried to get out of obeying God, giving excuses for why he had to refuse God’s request. After all, he was now 80 years old. Not a valid answer in God’s plan.

Moses saw himself as insignificant, a nobody, not equipped for the task of leading the Israelites from Egypt. Moses underestimated God.  The Lord replied, “I am with you.”

After giving four more reasons to avoid the calling from God, Moses agreed. He was out of excuses when God said, “Go! I’ll send Aaron with you!” (Exodus 4:14) God, the great “I AM,” equipped Moses because He had created Him for just this time.

After settling into my new community, the reasons God had called me to leave my hometown became evident over time. If I hadn’t obeyed, I wouldn’t have grown spiritually. Saying “yes” to God was just the first step in living a life sold out to Him.

Beginning with my writing ministry, which led to speaking engagements, each step I took required me to rely on Him. I made a “C” in college speech, the only “C” on my transcript, I might add. Speaking before my peers was something I couldn’t imagine. Surely, I would make a fool of myself.

I consulted with my pastor about my first major speaking engagement, a three-day retreat, before 200 women. Until that time, I’d only spoken before a handful of women. When sharing my doubts with Pastor Ray, he said, “Carol, God doesn’t call the equipped. He equips the called.”

Obeying God Requires us to Leave the Familiar

For me to accomplish what God had called me to do, I had to leave my hometown. I’d just retired from a 30-year teaching career. My retirement plans included expanding my photography business and doing freelance writing for local newspapers. But God had a better plan. (Did you know you won’t find the word retirement in the Bible?)

When Jesus called His disciples to follow Him, they had to leave the familiar behind. They dropped their nets. Some left their businesses behind. Another gave up a lucrative government job.

What We Gain When We Obey

Saying “yes” to God has opened doors to meet people and see places I never dreamed of visiting. If I hadn’t obeyed Him, I would have missed out on the richness of living for God. I’ve traveled out of the country on mission trips and made a 10-day spiritual journey to Israel. I would still be living in fear: fearful of others’ opinions, fearful of making mistakes, and fearful of dying.

Two scriptures come to mind about fear. Isaiah 41:13 follows: “For I am the Lord your God who takes hold of your right hand and says to you, ‘Do not fear; I will help you.’” The other scripture, Psalm 56:3, says, “When I am afraid, I put my trust in you.”

Has God called you to say “yes” to His leading? Are you ready? Willing? Eager? A little scared? In 2 Timothy 1:7, Paul writes “…for God gave us a spirit not of fear but of power and love and self-control” (ESV). When He calls you to go, reply with, “Send me.”