Top Posts
There’s A Light That Enters Houses With No...
Knowing the One Who Always Keeps His Word
Pregnancy Resource Centers Fight For Life Amidst Opposition
This World is Not Our Home
Lessons Learned From a Gingerbread House
Let There Be Peace on Earth
‘I Wanna Dance’ movie: Whitney Houston’s success and...
Fact Finding, Sight Seeing, and Prayer Walking
Kidney donation led to 8 life-saving surgeries
The Power of Curiosity
Home Tags Posts tagged with "Israeli-Arab Peace Deals"

MANAMA, Bahrain — After a week of reporting from the United Arab Emirates,  Christian author Joel Rosenberg last week reported from the Kingdom of Bahrain on dramatic new Israeli Peace Deals. 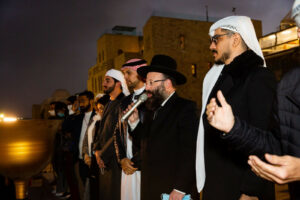 In his latest article from the Middle East on All Israel News https://www.allisrael.com   , Rosenberg said: “And while it’s getting very little attention in the international media, I can tell you the big story here is that one new dramatic peace deal after another is being forged in the Middle East and North Africa.

“First came the UAE. Then Bahrain. Then Sudan. And suddenly Morocco has become the fourth Arab country to make peace with Israel in just four months.”

“Call them Hanukkah miracles,” said Rosenberg. “Call them Merry Christmas presents. They certainly bring joy to many in this region.”

Rosenberg said: “Everyone I am interviewing in the region is excited and astonished by how rapidly peace with Israel is breaking out — and we expect more Arab and Muslim countries to make peace soon, possibly with Oman and even Indonesia.”

To put these historic events in context, Rosenberg did an exclusive interview with the United Arab Emirates foreign minister at his home in Dubai. He gave Rosenberg so much material, that he ran three stories.

* Part two: UAE foreign minister to ALL ISRAEL NEWS: ‘Erdogan is the most important Turkish leader in 100 years,’ but dangerous.

Check out these stories at: https://www.allisrael.com

Here are some of the other key stories Rosenberg has published in just the last few days.

* Seven direct flights a day are going back and forth from Israel to the UAE and more than 15,000 Israeli tourists are expected to flock to the UAE in December alone.

* An Emirati businessman just purchased a 50% stake in an Israeli soccer team.

* A delegation of Israeli mayors — both Jews and Arabs — just visited the UAE.

* Israeli President Rivlin just called the King of Bahrain and plans are being finalized for Rivlin and Prime Minister Netanyahu to make their first state visits to the UAE and Bahrain soon.

* This week, the Buddhist country — the Kingdom of Bhutan — established relations with Israel for the first time.

Meanwhile, Rosenberg said Hanukkah was celebrated in Israel under various COVID restrictions, but it’s possible that Christmas will be canceled.

He writes: “The cabinet has said it will impose a third lockdown if the daily infection count reaches 2,500. It is now at almost 2,300. This would be a very sad blow to followers of Jesus in the Holy Land who already had to forgo Easter this year.”

Rosenberg also reported that Israel’s parliament has a Dec. 23 deadline to pass a new budget, or new elections will automatically be triggered, likely set in March 2021.

“Netanyahu and his Likud Party are struggling in the polls. And now one of the most popular leaders in Likud has dropped a political bombshell — announcing that he is so frustrated with Netanyahu that he is leaving Likud and setting up his own political party to run against Bibi.”

Rosenberg asks: “Will that persuade Netanyahu to cut a budget deal and forestall new elections — or roll the dice and test his fate?”