Top Posts
Colorado football coach Sanders’ unabashed faith
There’s A Light That Enters Houses With No...
Knowing the One Who Always Keeps His Word
Pregnancy Resource Centers Fight For Life Amidst Opposition
This World is Not Our Home
Lessons Learned From a Gingerbread House
Let There Be Peace on Earth
‘I Wanna Dance’ movie: Whitney Houston’s success and...
Fact Finding, Sight Seeing, and Prayer Walking
Kidney donation led to 8 life-saving surgeries
Home Tags Posts tagged with "Jersey Mike’s Subs"

COCONUT CREEK, FLORIDA. (ANS) – Longtime partners Food For The Poor and Minnesota-based Feed My Starving Children, a Christian nonprofit organization that sends prepackaged meals to more than 70 countries, are teaming up for Join The Pack. The partnership, which dates back to 2008, resulted in almost 57 million meals in 2018.

The easy-to-make, easy-to-transport MannaPack meals from Feed My Starving Children are an answer to countless prayers. In a place like Guatemala, which suffers from one of the worst rates of chronic malnutrition in the world, the meals are like manna from heaven.

Working in assembly lines, participants do everything from filling the MannaPack bags to weighing the amount of food needed in each meal pack to labeling and boxing the bags for shipment.

Businesses, churches, community groups or individuals can sign up to form fundraising teams.

“At schools and orphanages, MannaPack meals are a lifeline for students,” said Food For The Poor Vice President Mark Khouri. 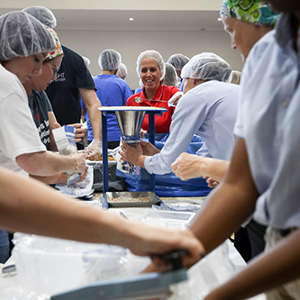 A team from Jersey Mike’s Subs joined hundreds of volunteers last year to help Food For The Poor pack lifesaving meals for starving families in Guatemala. This year, the team is returning to help give those families shelter.

The charity’s Join The Pack event is back in South Florida for the fourth straight year. More than 500 volunteers are expected to gather on May 31 and June 1 at Florida Atlantic University’s Student Union in Boca Raton to pack 150,000 meals.

Volunteers also are raising money to build nine homes in Sansur, Guatemala, for families in desperate need of safe shelter. Jersey Mike’s is on a mission to raise enough to build one of those homes.

For Jersey Mike’s employees, Join The Pack is an opportunity to do something hands-on with community volunteers that positively impacts lives, whether it’s providing nutritious food to families who would otherwise have nothing to eat or giving them the security of a home with concrete walls, solid floors and a roof that doesn’t leak when it rains.

Fans of Jersey Mike’s can help their favorite sub shop reach their fundraising goal to build a home during a special Join The Pack promotion at Jersey Mike’s stores in Parkland, Boca Raton and Jupiter.

Here’s how it works: Jersey Mike’s will distribute donation cards valid for a free regular sub with a $3 donation to Food For The Poor on select days and at select locations.

Since 2010, Jersey Mike’s locations throughout the country have raised $41 million for charities and local causes. Jersey Mike’s founder and CEO, Peter Cancro, has fostered a workplace culture to “make a difference in someone’s life,” Roland said.

“We are so grateful to work for a company that allows us to personally help those in need and gives us the opportunity to do this daily,” Roland said.

In Sansur, Guatemala, 23-year-old Blanca still dreams of a new home where she can keep her three young daughters safe and warm in Guatemala’s high-altitude cool winters. She wouldn’t have to worry about the rickety roof collapsing in on the shack they share.

“We encourage families to enjoy a meal together at Jersey Mike’s on the days of the promotion and make a huge difference,” Aloma said. “We are grateful for such a compassionate company, because through their donation, a poor family will have the safety and security of having their own home.”

For more information on Join The Pack, including sponsorship opportunities, call Cassandra Celestin at 954-427-2222 ext. 4020. Or, to register for the event, visit www.JoinThePack.org.

Feed My Starving Children is a member of Global Impact’s charity alliance.

Volunteers hand-pack scientifically formulated meals for undernourished children, which are distributed to a network of 80+ partners in 60+ countries each.

Visit Feed My Starving Children directly to make a donation or learn more about their volunteer opportunities. Connect with FMSC on Facebook at: https://www.facebook.com/fmscChanhassen/