Top Posts
Knowing the One Who Always Keeps His Word
Pregnancy Resource Centers Fight For Life Amidst Opposition
This World is Not Our Home
Lessons Learned From a Gingerbread House
Let There Be Peace on Earth
‘I Wanna Dance’ movie: Whitney Houston’s success and...
Fact Finding, Sight Seeing, and Prayer Walking
Kidney donation led to 8 life-saving surgeries
The Power of Curiosity
When Love Came Down at Christmas
Home Tags Posts tagged with "Jessica Chao" 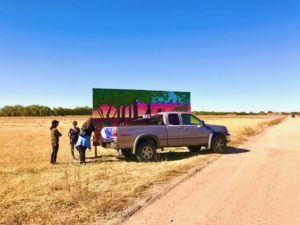 Five women—all muralists—decode the geography and paint portraits of the land and people, part of the reconstitution of Valle de Oro.  We’re told it’s the first of its kind, conservation and construction holding hands in fellowship. One artist tells of the plan: particulars of how the land will move, the forest extended, and the soil will smile. Five Sandhill crane nibble the ground. One muralist, Jessica Chao, is giddy.  Chao hosts round sunglasses on her face, and wears paint-splattered clothes. This is her first mural.  She pulls up her Toyota to support her paints, a truck-easel.  Chao renders trees on the wooden billboard, a pink and purple sky, offering a unique view of place.  “What an honor! I’m so thankful to be a part of it,” she tells us, smiling beneath the sun.

Albuquerque Poet-Laureate Michelle Otero is wearing a hat, rubbing sunblock on her face.  She sports a black shirt, but later puts on a long sleeve t-shirt that reads, “Thanksgiving 5K.” It has a turkey gobbling above the lettering. Otero is talking to Megan Kamerick, a radio and TV producer.  Kamerick has her dog on a leash, offering it water on a warm autumn day.   As poet-laureate, Otero has instituted poetry walks, inviting people from the region to participate in beauty.   Otero hugs my wife; they chat.  Since June 16th, 2018, Otero has walked many miles, I muse, keeping people in touch with verse and earth.  Otero then calls to us all—a group of about 20, young, old, together.  She reflects on the day, reminding us what the afternoon will embrace. 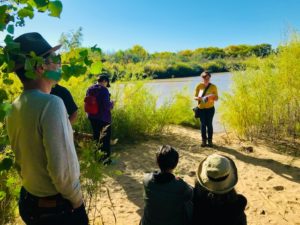 Amaris Ketchum is wearing a yellow pullover sweater and blue jeans.  A swath of people trail her.  We follow her throughout the Bosque along the Rio Grande River, listening to poems of earth and sky.  Ketchum is humorous, yet thoughtful, her face occasions a smile, but pensive, shy, or sorts.  I ask her about her book of poetry. She has some in her car, but only for cash.  I’m reminded by 516 Arts Executive Director Suzanne Sbarge —co-sponsor of the walk, part of the Species in Peril exhibit—that the gallery carries the poetry books.   I’m thankful.  Ketchum creates poems from maps and hosts the City on the Edge podcast.  She reads and recites as we ponder and procure our place in the forest, father and daughter, wife and friend, man and women, contributors to this co-op we call community.

The Fields and Mural Poetry Walk took place on Saturday, October 19th from 2-4 PM.  It was hosted by Michelle Otero and co-sponsored by the Valle de Oro Wildlife Refuge and 516 Arts.