Top Posts
Colorado football coach Sanders’ unabashed faith
There’s A Light That Enters Houses With No...
Knowing the One Who Always Keeps His Word
Pregnancy Resource Centers Fight For Life Amidst Opposition
This World is Not Our Home
Lessons Learned From a Gingerbread House
Let There Be Peace on Earth
‘I Wanna Dance’ movie: Whitney Houston’s success and...
Fact Finding, Sight Seeing, and Prayer Walking
Kidney donation led to 8 life-saving surgeries
Home Tags Posts tagged with "Jesus Film" 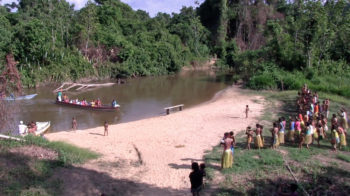 they wanted to find someone who would tell them about the Son of God.

“They sent out five guys,” says Larry Buckman, a veteran missionary with Renew Outreach. “The old men in the tribe said they were too old to go, so they sent the young guys out.

“Why did they decide to trek 10 days straight north to find somebody? They had no way of knowing there was anybody even up there. Of course the Holy Spirit was leading them.”

The Yanomami group that walked out of the jungle were among the worst Skull Splitters in the entire Amazon, from the Hakoma area, according to Larry. While there were a few Yanomami believers, the Hakoma area was unreached. Fifty-five years earlier, two missionaries named Bob and Steve had attempted to take the gospel to them.

When Bob and Steve first went to the Hakoma area in the Sixties they reported that almost everyone was drugged, they had unsightly green mucous coming out of their noses, and they were vomiting all the time. “At night they would get possessed by demons, they would beat up on their wives and split their heads open with their clubs.

“The tradition was if a girl was going to get married to another man, the oldest man in the tribe had her first. If she let the young man have her first, they beat up on her,” Bob reported to Larry.

“They almost killed us then,” Bob said.

The five warriors arrived at the Palimi-ú River in September, 2012 after their 10-day journey.

They happened to enter a village where two Brazilian Christians, Paul and Bethany had been living for 14 years, learning the language and translating the New Testament.

Remarkably, the five arrived at the height of a celebration by the local church that involved food, dances, the Lord’s Supper and baptisms.

The believers immediately recognized them as the dreaded Skull Splitters, enemies of the village. The warriors were dressed in loincloths, armed with bows and arrows, blowguns and deadly poison darts. The celebratory mood suddenly shifted.