Top Posts
Knowing the One Who Always Keeps His Word
Pregnancy Resource Centers Fight For Life Amidst Opposition
This World is Not Our Home
Lessons Learned From a Gingerbread House
Let There Be Peace on Earth
‘I Wanna Dance’ movie: Whitney Houston’s success and...
Fact Finding, Sight Seeing, and Prayer Walking
Kidney donation led to 8 life-saving surgeries
The Power of Curiosity
When Love Came Down at Christmas
Home Tags Posts tagged with "Jim Caviezel’s inspiration of Biblical proportions" 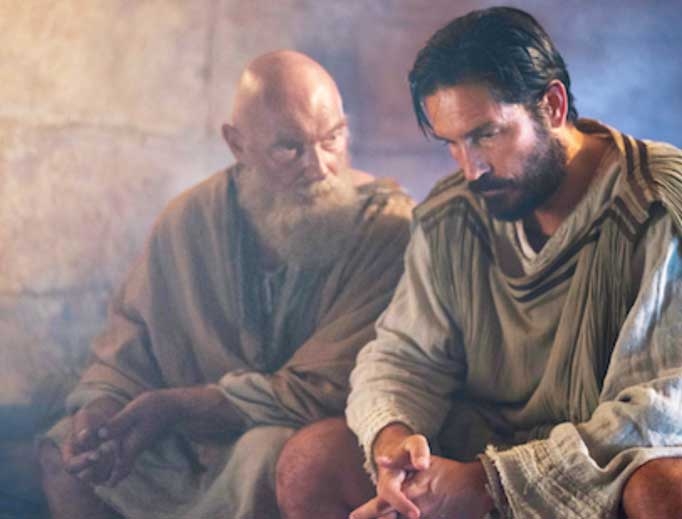 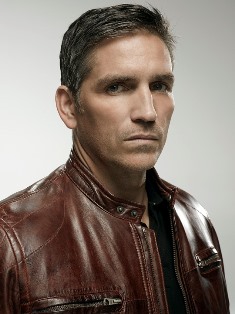 NASHVILLE, TN (ANS – March 22, 2018) — Jim Caviezel, who plays the physician and evangelist Luke in Paul, Apostle of Christ, which is coming out on Friday, March 23, 2018, is no stranger to taking on challenging Biblical acting roles, following his portrayal of Jesus in blockbuster 2004 film The Passion of the Christ.

Despite reportedly receiving warnings from Mel Gibson that playing Jesus would hurt his acting career, he took the risk.

During filming he suffered from pneumonia and hypothermia, was struck by lightning, accidentally scourged and had his shoulder dislocated. Years later he admitted that good roles had been hard to come by since, but stated he had no regrets about taking the role.

Following The Passion of the Christ, Caviezel used some of his fee from the film to pay for three Chinese children with cancer to receive medical treatment.  Along with his wife Kerri Browitt, who he married in 1996, they ended up adopting the three children saying: “They are people, just like us.”

He also used the platform of such a high-profile role to begin to give motivational talks on college campuses across America, which he continues to do today.

Caviezel was raised in the countryside of Mount Vernon in Washington in a devout Christian home as one of five siblings. The Caviezels were a family of athletes and Jim’s passion was playing basketball. But it wasn’t until a foot injury ended his hopes of a career in the sport that he stumbled across acting.

He told me during an interview at “Proclaim 18,” the recent NRB Convention in Nashville, Tennessee, how his parents, his basketball coaches, and some of the biggest names in the film industry, were his greatest role models as he went on to become a Hollywood star.

“I had good parenting from my father. My parents were not perfect, but they continued as we all do to try to be better,” he said. “My basketball coaches had an impact on me, even the bad ones. They were just as helpful because I learned what not to be. I also saw some bad fathers with them.

“Charlton Heston was also one of my greatest role models. Also there was a lot of what I saw early on with Kevin Costner when I was around him on the set of Wyatt Earp and how generous he was to me. 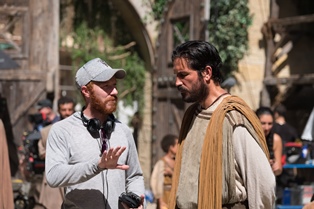 “As far as Mel Gibson as a film maker and his work ethic, I take pieces of it but that doesn’t mean that I’m working with people that are perfect across the board or that are not sinful.

“I also got to meet Jimmy Stewart on many occasions; and I knew quite a bit about him. He was a great role model and a great American. He served our country very bravely. He flew 26 missions in the liberator over Germany.

“Still, to this day, I can’t watch It’s A Wonderful Life without crying every Christmas. That film has great power in it I think that one for example the message that without you this world would be a different place. And I think that’s how God speaks to me. And, when I talk to young people, I would tell them that, if you thought that from the small town that I came from, that I ever thought that I was going to be known as the man who played Jesus, I’d say you got the wrong guy. But you know, I was asked, I did it, and the same thing with Paul, Apostle of Christ. I just say, ‘Guys if we’re going do this movie, we’ve got to make something that’s going to last forever.”

Fourteen years later after taking on the role of Jesus, I asked him why he decided to portray Luke in Paul. Apostle of Christ, and he replied, “I didn’t think that I was going to be playing Jesus in The Passion of the Christ when it occurred. I just found it a hard time turning down Mel Gibson and a phenomenal script. I mean it just always came down to the material to me. 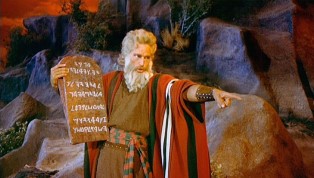 “I think it’s harder in this day and age to make those kinds of films.  Gone are the days of Charlton Heston, and making a film like The Ten Commandments that Christians, as a whole, are going to find fantastic. In Paul, Apostle of Christ, the performances are really strong, but the words are still stronger. I love the scripture and the way where it’s very provocative.  My industry likes provocativeness in a different way. I’m lucky that I get to be the guy that you know gets to do it.  I just want to make sure it’s executed properly.”

Jim concluded by explaining how the greatest controversy of this film is the message of forgiveness, saying, “It does not mean weakness; it does not mean passivity; but it means forgiving despite of the situation that you can look evil in the face and we need that now.

“It is very easy to love people who think like you think. It is very difficult to treat someone who has polar opposite views with the same dignity and respect that you would treat a friend. That’s the core message of this movie and that is the reason why I wanted to be a part of it because it has an edge to it.

“Especially in these times when people are talking about civil war do you have any idea what you’re asking. We need to start listening to each other and it starts from one side. It starts from that’s why it’s very hard to be a Christian you have to be the one to do it. You’re the one that’s going to be Christ.  You’re gonna have to die to yourself to be able to do that. And I think that once people start listening to each other that it takes that first person to do that.”

** I would like to thank Robin Frost for transcribing this interview.

Photo captions: 1) Jim Caviezel. 2) Writer-director Andrew Hyatt with Jim Caviezel during the filming of Paul, Apostle of Christ. 3) Charlton Heston as Moses in The Ten Commandments. 4) Peter Wooding interviewing Jim Caviezel during at Facebook Live broadcast at the NRB Convention in Nashville, Tennessee. 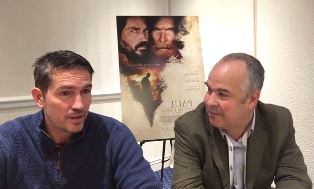 About the writer: Peter Wooding, the younger son of Dan and Norma Wooding, is an award-winning radio, TV, and print journalist. Having previously spent 10 years as news editor with UCB Radio in the UK, Peter has travelled extensively, reporting from countries including Greece, Russia, Serbia, South Sudan, the Philippines, Uganda, South Korea, Zambia, Gambia, Georgia, Mozambique, Croatia, Israel, India and Ukraine. He reports regularly for the ASSIST News Service, Samaritan’s Purse, and Leading The Way. Peter is the London Bureau Chief for the Global News Alliance, and lives in North Wales, UK, with his wife, Sharon, and their three daughters, Sarah, Anna and Abigail. To contact Peter, please e-mail him at: woodingpeter@hotmail.com or by telephone at: +44 7500 903067.