Top Posts
Colorado football coach Sanders’ unabashed faith
There’s A Light That Enters Houses With No...
Knowing the One Who Always Keeps His Word
Pregnancy Resource Centers Fight For Life Amidst Opposition
This World is Not Our Home
Lessons Learned From a Gingerbread House
Let There Be Peace on Earth
‘I Wanna Dance’ movie: Whitney Houston’s success and...
Fact Finding, Sight Seeing, and Prayer Walking
Kidney donation led to 8 life-saving surgeries
Home Tags Posts tagged with "Jim Irwin"

ANAHEIM, CA (ANS) — When Bob Cornuke first got involved in searching for lost locations in the Bible, he met a man named Jim Erwin who was the eighth man to walk on the Moon.

“He was the first one to drive a  car on the Moon,” Cornuke told Peter Wooding, European Bureau Chief for ASSIST News at the recent NRB Convention in Anaheim, CA.

“He said ‘Bob how’d you like to do something really fun? Let’s look for Noah’s Ark! It’d be the greatest discovery of all time!’”

Cornuke thought, “Ok, how can you pass up on that?” 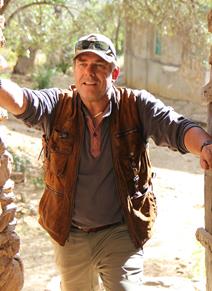 Cornuke had been involved with a career in law enforcement, got involved in a very bad shooting, moved to Colorado — and that’s when he met Jim Erwin.

“So that started this cascading life of adventure and fun and risk and peril and books and video, TV and all that kind of fun things — and it was all because of meeting a man who walked on the moon that started it for me.”

What have been some of the standout moments?

“It’s hard to say that we’ve ‘discovered’ anything because God will reveal things in His time, for His purpose and His glory. But the standout things that we think we have been allowed to be a part of that God’s revealed to us is the Mount Sinai story.

“Where is the real Mount Sinai? Tradition puts it of course and everybody believes that it’s in the Sinai Peninsula. But the Bible says in Galatians 4:25 that Mount Sinai is in Arabia. That’s a red flag for me, and as a former FBI trained homicide investigator I had to check that out because the Bible is shooting a flaming arrow right into Arabia as to where the real Mount Sinai is. So I went there, I met with a man named Larry Williams — we found this peak that’s black on top and all these things around it. There was pillars and altars and writings and a lot of people were saying ‘yes that is the real Mount Sinai’ now as late as Josephus Demetrius and Philo, historians from as far back as 250 BC, have said that’s the place in the ancient land of Midian. So we think the real Mount Sinai has been discovered in the ancient land of Midian. And believe it or not, they’re doing a Hollywood movie on it now and of course I’m not going to be in the movie but it’s a big Hollywood production that we’re actually in the process of production as we speak.”

Cornuke said the movie will be called ‘The Mountain of Fire.’

“It’s really fun because we’re talking big Hollywood types — I can’t reveal a lot of the names that we’re involved with now because they’re contract negotiations — but Dean River is going to be producing it. One of the co-producers is Charles Seeger who did national Treasure 1 and National Treasure 2. And I’m going over in a few weeks doing some site locations in Jordan where they filmed Lawrence of Arabia and I’ll be with the film commission over there doing site locations for the movie. I’ve never had a movie done about me, so it’s all new but it’s very fun and exciting.”

Cornuke has 11 books and the most recent just came out  called “Explorer — My Life Searching for Lost Locations in the Bible,” that chronicles all his searches.

“I’ve been involved with 72 expeditions, been arrested 5 times in the Middle East for carrying a Bible, believed to be a spy — so they arrest you because you’ve a Bible in the Middle East. I don’t want to ruin the book, but I do live I survive! 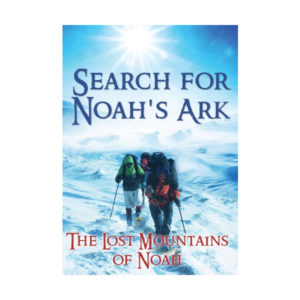 The book is about Cornuke’s searches for Noah’s Ark nine searches and expeditions looking for Noah’s Ark.  “I’ve looked for the real Mount Sinai that we just talked about. I’ve looked for the crossing site of the Red Sea where the fleeing Hebrews went being chased by Pharaoh went through the Red Sea. I’ve searched for the Ark of the Covenant in Ethiopia on 22 trips looking for it. I’ve actually been on the search looking for Paul’s shipwreck — we think we’ve found the  four anchors or God’s revealed the four anchors of where Paul’s shipwreck would be and that’s off the coast of Malta. We have four lead first century Alexandrian freighter anchors that have been located over there by divers. And then we more recently have been involved searching where the real Solomon’s Temple and Herod’s Temple are located. We’re looking for where Christ was crucified and that’s where Golgotha is of course.  I don’t think people are going to be too believing of where we say because tradition is such a strong thing, so you have to get past that big rock in the road that’s called tradition to find these locations. You take what the Bible says and you bump into these roadblocks of tradition. So we try to go around these traditions and follow God’s words as a roadmap and as a compass and as a guide.”

How much have these travels helped Cornuke’s faith to actually see the Bible come to life?

“I don’t care who we are you know the Bible is a very difficult thing to believe you see — well there’s the Red sea parting and you see the world being flooded and you see animals aboard the Ark and you start saying ‘well, that’s a little farfetched’ and then you say ’wait a second, God put that in the Bible.’ The Bible is God’s revelation of Himself to man. God’s the author. Salvation’s the end and truth without any mixture of error is the content. The Bible is and shall be the supreme standard by which we should live. We should stop saying ‘wait a second we’re second guessing God’ because that’s impossible. If the first line in the Bible is “In the beginning God created…” anything is possible. God can create. He can allow, he can provide things such as the flood to teach a disbelieving world about Himself and His nature and what He’s intended. For instance, Noah’s Ark — if you’re on that Ark you’re saved. If you’re off that Ark, you perish. So there’s no ‘spiritual Switzerland’ when you’re on the Ark of Christ today — you’re saved. If you’re off the Ark of Christ today you perish. The ark was a forerunner of Jesus and a perfect illustration of salvation.”

Cornuke continued: “But the world wants to make everything complex and they want to say ‘I want to have all these answers.’ We don’t have all the answers. God says ‘I don’t want you to have all the answers. I want you to have a childlike faith.’ Matthew 11:25 says: ‘Oh father Lord of heaven and earth thank you for hiding the truth from those who think themselves so wise and clever and for revealing it to the childlike.’ Not the childish, the childlike. We have too many intellectuals today. People these days just puffed up with all this intellect that they can’t see the truth past the scales in their eyes and the plugs that are in their ears. The Bible says ‘thank you for hiding the truth from those that think themselves so wise and clever.’ 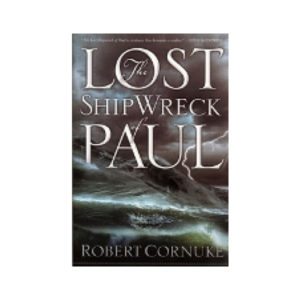 Book cover artwork for The Lost Shipwreck of Paul

“The whole university system is designed to gut God out of the divine and say these things didn’t happen. The Red Sea parted from a strong wind. No, God parted the red sea with his mighty hand! The Bible says ‘I will show you these things that you should know that I’m the Lord your God.’ He didn’t do it because he was a cosmic show-off. He showed the people because He wanted them to know there was no other way of salvation except through me. That’s what God’s done with his Son Jesus Christ who died on the cross for our sins, gruesome death He paid the price for our sins. It just pains God’s heart to see a world today that’s totally disbelieving, that’s caught up in following Man instead of what God is saying.”

What’s next for Cornuke — are there more adventures or will he ever hang up his boots?

“For some people they stop. And so why do I look for these things? Because I try to show people the physical evidence that’s in the Bible. People say well you just need to have faith. Well faith is a great thing, but people say ‘well you just need to have faith why do you need to find things?’ Well, how did Jesus teach when he encountered the doubting Thomas? He said ‘look at the holes in my hands and my side.’ And what did Thomas do? He fell down and said ‘my Lord and my God!’ I try to show people the evidence, the physical evidence that these ancient historical events are real and true; and if we rely on the Bible — every word of the Bible from start to finish — we can rely on the Bible; and if we do so, we have the faith of a child and the world will change and you can move mountains with that kind of faith. So the world today is doubting — and who blames them because they’re getting fed nothing but this nonsense from a secular world that says they have the answers when they don’t even know what the question is let alone have the answers.”

More information about Cornuke and his work can be found online at www.Baseinstitute.org .

** ASSIST News would like to thank Robin Frost for transcribing tis interview.