Top Posts
Knowing the One Who Always Keeps His Word
Pregnancy Resource Centers Fight For Life Amidst Opposition
This World is Not Our Home
Lessons Learned From a Gingerbread House
Let There Be Peace on Earth
‘I Wanna Dance’ movie: Whitney Houston’s success and...
Fact Finding, Sight Seeing, and Prayer Walking
Kidney donation led to 8 life-saving surgeries
The Power of Curiosity
When Love Came Down at Christmas
Home Tags Posts tagged with "Joëlle Rostkowski" 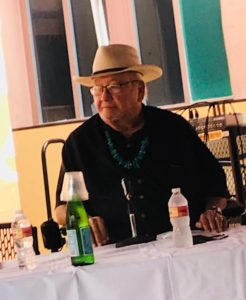 SANTA FE, NEW MEXICO— As I sit in the courtyard of the IAIA Museum of Contemporary Native Arts,  I see movie director Chris Eyre chatting with a woman.  Eyre is notable for his movie Smoke Signals.  I also see a few well known artists and writers arrive, greeting each other with hugs and hellos.  We’ve all gathered at the SWAIA Indian Market to hear from Pulitzer-Prize winning writer, N. Scott Momaday.  Like the clouds gathering overhead, the congregation of creative minds have gathered to pay homage to a living legend.

As I wait it dawns on me: there’s only one Native American writer whose won the Pulitzer Prize for literature. N. Scott Momaday was bestowed America’s highest literary honor in 1969 for his book House Made of Dawn, a work that contrasts two cultures (Euro-American and Native American) as expressed through the main character, Abel, a man from the Jemez Pueblo in New Mexico.  In addition to its cultural commentary, House Made of Dawn has deep spiritual insight, quoting Biblical text within a traditional Native understanding.  Beyond House Made of Dawn, Momaday has written books of poetry and prose, painted—a practice he picked up in the 1970’s following his father’s footsteps, and is seen as a catalyst of creativity within the Native American Renaissance.

Born in 1934 in Lawton, Oklahoma to a writer mother, Natachee, and an artist father, Al, Momaday is of Kiowa and Cherokee descent. Al and Natachee traveled to New Mexico while N. Scott was young, taking jobs as teachers on the Jemez Reservation.  Momaday received his Ph.D. from Stanford University and conferred with over 20 honorary degrees. Considered by many scholars to be the stimulus for modern Native American literature, Momaday has influenced countless writers, poets, and artists through his many works. 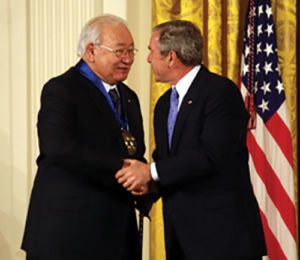 In 2007, Momaday was given the National Medal of Arts by George W. Bush, and in 2018, a lifetime Achievement Award from the Anisfield-Wolf Books awards.  He’s also a UNESCO Artist for Peace recipient.

With his many awards and accolades, I’ve likened N. Scott Momaday to Samson Occom (1723-1792), the first Native American to publish writings in the English language: both were ‘firsts’ as Native Americans. As the first Native-ordained Presbyterian minister, Occom published several works ranging from hymns to studies of herbal medicines. In 2006, Oxford University Press published Occom’s complete works, a welcome addition to Native American studies [1]. 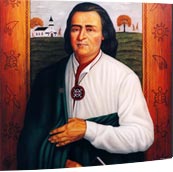 In my mind, Native American writers are unsung heroes of American literature. Largely misunderstood or stereotyped, Native writers offer a unique and important view on American life. And though I’m not keen on separating people—particularly authors—by race, it’s important to recognize individuals representing indigenous cultures.  At the end of the day great literature is great literature, regardless of race, and N. Scott Momaday sits up with some of the finest. 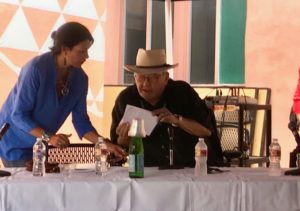 Momaday was recognized for his many achievements at the 2018 SWAIA Santa Fe Indian Market, the largest indigenous gathering for Native arts and culture in North America.  Sitting on a panel that included his daughter, Jill Momaday, French scholar, Dr. Joëlle Rostkowski, and Autry Museum of the American West director, Dr. W. Richard West, the impetus for the event was a recently published book by Joëlle Rostkowski entitled, N. Scott Momaday and the Sense of the Sacred:  A Native Poet and Artist, a Universal Voice.  After opening remarks from each participant, Momaday shared thoughts on his relationship with the panelist, talked about his world travels and teaching, and recited two poems.  Of particular interest was The Bear, a poem he delivered in his commanding voice.  While reciting the poem, thunder broke out overhead.  After the recitation Momaday joked, “I did that,” referencing a comment his daughter made about Momaday having a “voice like God.” The audience joined him in laughter.

Concerning his daughter, Jill Momaday recently directed a film about Momaday, Return to Rainy Mountain.  The film is descried as “a firsthand perspective of being Indian in America.” Through poems, books, plays and art, “The documentary is a road trip to sacred Kiowa ancestral sites that inform the ancient Kiowa myths, legends and oral tradition…Return to Rainy Mountain is a personal and unique film that deals with family, cultural heritage, identity, and love. It’s a universal story that will appeal to many people across many cultures and inspire and encourage the telling of stories everywhere” [2]. 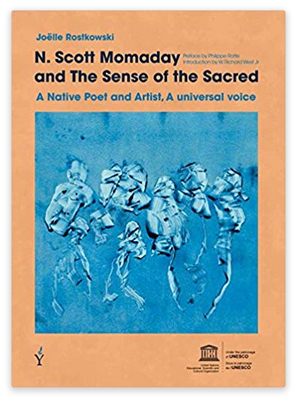 N. Scott Momaday and the Sense of the Sacred

The new book by Joëlle Rostkowski takes a scholarly look at the bulk of Momaday’s writing, with various accompanying artwork by Momaday spread throughout. As an international consultant for the United Nations and professor in Paris, Rostkowski has taken a keen interest in the work of Momaday. With N. Scott Momaday and the Sense of the Sacred, Rostkowski continues her conversation with outstanding Native American artists, writers, and poets. In addition to Momaday, Rostkowski, along with her husband, Nicolas, has consulted with various Native American tribes in Paris, highlighting their work, culture, and international significance at the Orenda Gallery located in Paris.

For more information on the book and Orenda Gallery, click here: http://orenda-art.com/NSCOTTMOMADAY-galerie-orenda.html