Top Posts
Colorado football coach Sanders’ unabashed faith
There’s A Light That Enters Houses With No...
Knowing the One Who Always Keeps His Word
Pregnancy Resource Centers Fight For Life Amidst Opposition
This World is Not Our Home
Lessons Learned From a Gingerbread House
Let There Be Peace on Earth
‘I Wanna Dance’ movie: Whitney Houston’s success and...
Fact Finding, Sight Seeing, and Prayer Walking
Kidney donation led to 8 life-saving surgeries
Home Tags Posts tagged with "John Stott" 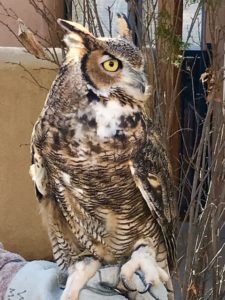 Horned Owl at the Sandhill Crane Festival in Albuquerque, NM

ALBUQUERQUE, NEW MEXICO—One-hundred years ago, the U.S. Congress signed the Migratory Bird Treaty Act—MBTA (codified at 16 U.S.C. §§ 703–712) , providing protection for birds migrating in the United States. Because of this, 2018 marked the Year of the Bird by Audubon and the National Geographical Society.

Audubon had another reason to declare 2018 The Year of the Bird: “Birds are facing many new and serious threats, including attacks on the MBTA itself,” the Audubon website states.

As one of the wonders of God’s creation—and important participants in ecological preservation, birds should be valued and cared for; so, kudos to the U.S. government for protecting them.

Because birds are an indicator for ecological well-being; if we have healthy birds, chances are we’ll have happy people. Or as the Telegraph reports, “Watching Garden Birds is Good For Your Mental Health.” Isaiah Nixon, an avid New Mexico birder and geographer, points out the birds help us listen in life: “Birds teach us–in the haste of the day– to be still. With bird watching we become aware of the transcendent and more-than-human aspects of life speaking to us, waiting for us to listen.”

We need to listen to the birds, and the Bible can help.

Birds and the Bible 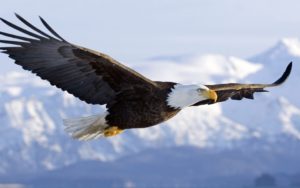 There are over 300 passages found in the Bible that reference birds. Most of the references are broad, stating a general name: fowl or bird. Other passages are specific, naming the type of bird—hawk, vulture, etc., thereby giving a clue to the interpretation of the text.

As an example, when eagles are used in a text it can convey strength, power, and endurance. When a vulture is used in a passage it usually references death. Jesus said, “Wherever the corpse is, there the vultures will gather.” And the dove—one of the favorite birds of the Biblical writers—references peace, God’s favor, the nation of Israel, and the Holy Spirit. Jesus told His disciples to be “wise as serpents, but gentle as doves,” inferring gentleness and goodwill.

Birds abound in Jesus’ world. In several parables and teachings, Jesus referenced birds. “Consider the birds,” He reminded the disciples as He discussed how God cares for people. “Are not two sparrows sold for a penny,” Jesus asks His followers, stating, “not one will be forgotten before God,” inferring the Lord will not forget His children. 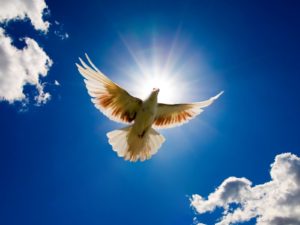 Jesus also compared birds to the kingdom of God: “The birds come and make nests.” And Jesus references birds when discussing the fact that He has no home: “The birds of the air have nests, but the Son of Man has nowhere to lay His head.”  And the Holy Spirit—in the form of a dove—descended upon Jesus at His baptism.  In short, Jesus was well aware of His feathery friends of flight.

The fact that Jesus was an admirer and observer of birds has led many Christians to be keen devotees of the amazing animals.

Reformer, Martin Luther, called “birds our schoolmasters.” The Christian poet and clergyman, George Herbert, used birds in some of his poems, shaping the poem Easter Wings  in the shape of bird wings. C.S Lewis used birds throughout his Chronicles of Narnia books, showing their variety and beauty, naming over a dozen in Aslan’s kingdom. Welsh clergyman and poet, R.S Thomas, was an avid birdwatcher, spending much of his vacations on birding escapades. 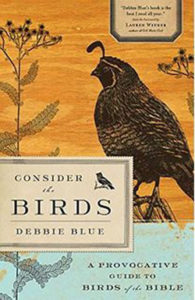 Consider the Birds by Debbie Blue

Christian author, Debbie Blue, wrote a book, Consider the Birds, using birds as a means to delve into human nature. And the rock band, Wovenhand—who has many Christian overtones in their music, released an album also entitled Consider the Birds. Lead singer David Eugene Edwards stated, “I wanted to remind myself of the birds. I am often anxious. I need to fall on my faith more.”

And then there’s Dove-Award winning Christian musician, Fernando Ortega, who’s spent considerable time photographing birds throughout New Mexico, posting his photographs on Twitter, and winning awards for his bird photography (2018 New Mexico State Fair). In a World Magazine interview, Ortega states he has 14 bird feeders in his yard, “not counting the hummingbird feeders.”

But the best-known bird-watching Christian was John Stott. As life-long enthusiast of birds, Stott called his admiration of birds, “orni-theology.” One of his best-loved books is  Birds our Teachers. In this work Stott relates birds to subjects ranging from repentance, self-esteem, gratitude, work, freedom, joy, and love. When I had the honor of meeting John Stott, the book I chose for Him to sign was this marvelous work.

In New Mexico we celebrate the Sandhill Cranes every fall with a festival dedicated to their arrival. In Socorro, they are a feature bird at the world famous birding spot, Bosque del Apache National Wildlife Refuge.

As I watch the Sandhill cranes at the Open Space during the Sandhill Crane Festival in Albuquerque, I couldn’t help but think of John Stott’s book where he reminds us of Jesus’ command to be bird watchers. Stott states, “It was Jesus Christ himself in the Sermon on the Mount who told us to be bird-watchers! ‘Behold the fowls of the air.” 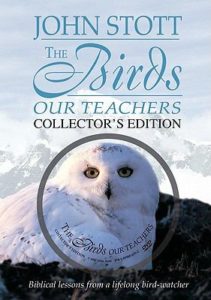 Birds Our Teachers by John Stott

Stott continues, “The Greek verb employed here [behold] means to ‘fix the eyes on or take a good look at’.” For Stott, bird watching is simply taking Jesus at His word.  Stott concludes, “So we have the highest possible authority for this activity…the Bible tells us that birds have lessons to teach us…”

And instruct they do. Birds are more than just feathery fowl, but teachers tethering us to God’s grace and creativity, helping our faith take flight.

To learn more how to help birds and the environment, check out A Rocha: http://www.arocha.org/en/